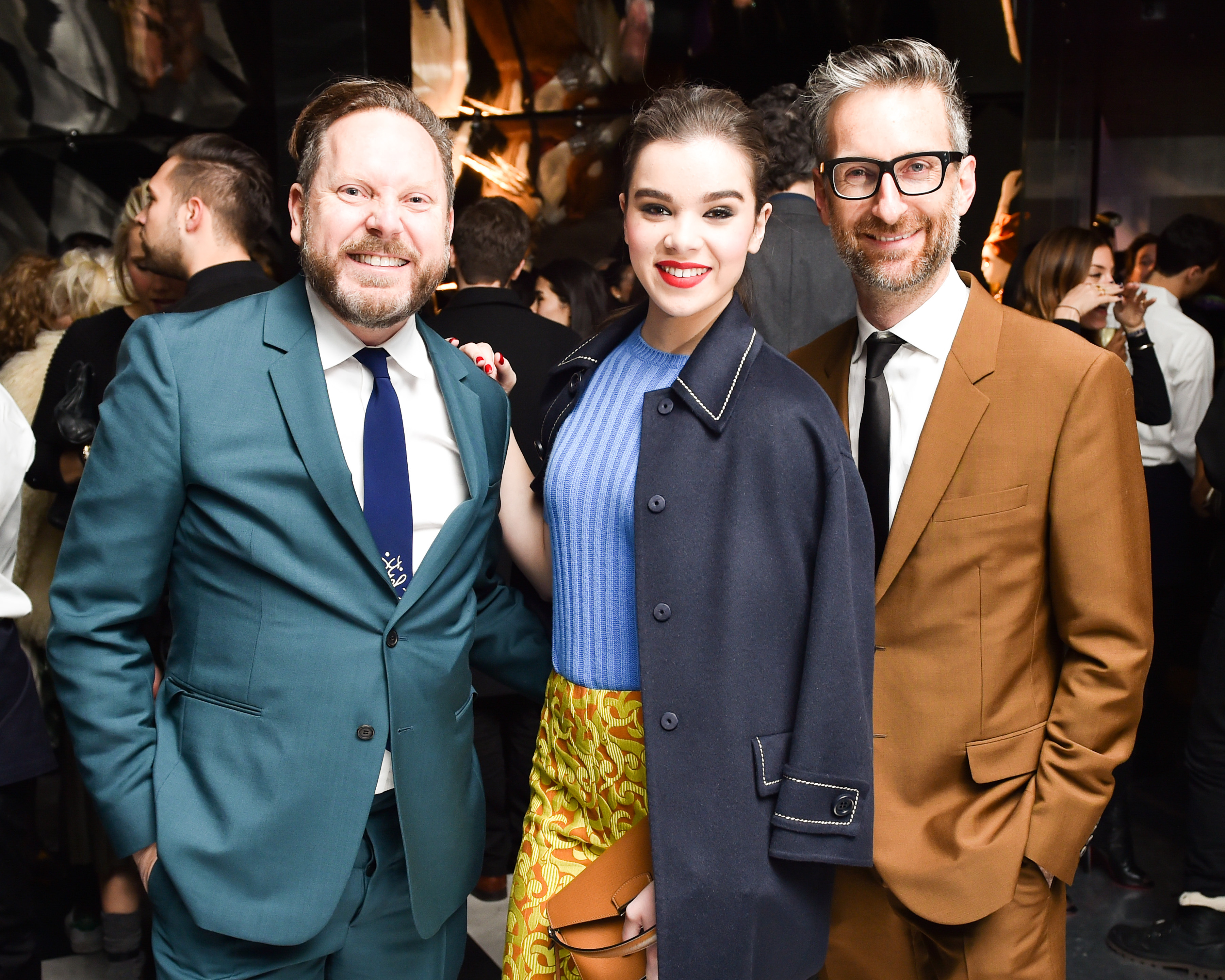 At last night’s “Prada: The Iconoclasts” party, celebs like Hailee Steinfeld, Kesha, Zosia Mamet and Gabrielle Union mingled with Tim Martin, and Michael Wilkinson, costume designers who whipped up the Prada looks and set for the store. Wilkinson is the Oscar-winning costume designer behind American Hustle; he and Martin are life partners who just formed a business focused on fashion-film projects. The duo filled us in on all things Prada and beyond…

What did you think when Prada approached you for the Iconoclasts project?
Tim Martin: We got an email, but we thought it was spam! It’s a project that was handed to us on a plate. It’s a dream project. Michael and I have a company together called Wilkinson Martin, which is really knew and we set it up to do collaborative design more in the line of fashion, but with a cinematic connection. Michael’s a costume designer for film and we get a lot of opportunities to do fashion-related projects. Michael did all of the costumes for American Hustle. I do architectural design, environmental design, and event design, but I’ve kind of come over to his world and we see a lot of opportunities for this crossover of people doing clothing and film-related projects. There’s been the Mad Men and Banana Republic partnership, for example. Mrs. Prada asked us to reimagine her Spring/Summer 2015 collection as well as this iconic store; it was kind of perfect for us to build out a set and think of this big project. We ended up doing 24 extra pieces. It’s not often that new pieces are made beyond the Prada family for a sort of capsule collection. It wasn’t really a capsule collection, but they were new pieces made to our reimagining. We designed a lot of the brocade pieces.

Will they be for sale?
Tim: They’re really just for the store for the next two weeks, but I think if collectors or if patrons wanted the pieces they would make it for them.

This is the first time Prada has ever hired costume designers for its Iconoclasts project. How does that feel?
Tim: Really special. There are three of us, with Arianne Phillips. We felt extra special, though, because we got the New York store. It’s an iconic store. It has amazing interior features. It’s been a once in a lifetime project and the collaboration with Mrs. Prada has been really fascinating because we really got to see the Prada mindset, which is out there and unlike any other. We knew that, but now we really know it.

How long did it take you to put this together?
Tim: We got the email four months ago and it had various design iterations and we went back and forth on the design. It was a true collaboration. We really got going with this particular party scheme over Christmas. So it was boom, boom, boom after that. I designed the sets and worked in the Prada headquarters in midtown for five weeks, and got a team together of crafts people, artisans, assistants, interns, and the Prada extended family were really generous and so helpful the whole time. I had an entire floor to myself with a team; we were finding crazy materials, making all of the eyes for the mannequins, doing the accessories, and so on.

The hair is wild! Did you guys do that too?
Tom: No, Charles LaPointe did the hair. The hair is very special. It’s real hair. I think it’s very expensive! But it was really worth the budget. We have 31 different hair styles. Our brief to them was to go not very traditional, but do a late 70’s or early 80’s Studio 54 look and to go crazy and go big, but don’t do Farrah Fawcett. We wanted them to do something that looked like they had been partying ’til four in the morning.

Speaking of, what’s the best party you’ve ever been to?
Tim: Do you know Tony Duquette? He passed, but he has an estate in Beverly Hills and the whole estate is made of found objects, even the house. It’s in a gully and it’s like a Balinese utopia with beautiful umbrellas made of skateboards and hubcaps; I went to a beautiful party there.

You and Michael are also partners in life.
Tim: We’ve been together 21 years.

Congrats! What’s it like forming a business together now?
Tim: It’s really great. We love each other deeply. We really do. We just get on really well.
Michael Wilkinson: It’s been amazing. I think in the back of our minds we may have been a bit nervous and we’re thinking, “Well, what if it doesn’t work?” But it’s been a real joy. Our design aesthetics have always been so well matched and it’s great to have been able to have the ability to do this amazing project.

The theme of tonight is all about the ’70s. Why is that era having its moment yet again?
Tim: Well, Michael did American Hustle after all so maybe that helps.
Michael: I think the ’70s was such an amazing time for clothes and people expressed themselves very exuberantly and it’s a time where people didn’t hold back and I think that’s something that we look back on with envy. I think we actually live in quite conservative times now. So to party like there’s no tomorrow and like the party will never end, that’s something that really has a nostalgic reverberation to us. I think it’s something we’re interested in exploring.
Tim: Yeah it is and it’s a different type of celebrity meets street life. It can be elegant in a messy way. It was more free and maybe a little purer. They didn’t play it safe then.
Michael: Now everyone worries about whether they’re going to end up on the worst-dressed list.
Tim: We talk about letting our hair down now, but I think we’re all conservative. They really [let their hair down] back then!

So Michael, did you keep anything from your American Hustle costumes?
Michael: I have Christian Bale’s blue velvet bow tie that he wore with his blue velvet suit. That’s my little memento.

Do you ever wear it?
Michael: No, but sometimes I take it out and give it a little pat!

Very good write-up gitarre kaufen berlin. I located your blog post along with desired to point out that I genuinely beloved checking your blog site blogposts. Of course I’m going to be signing up for your rss and I we do hope you publish once more quickly!