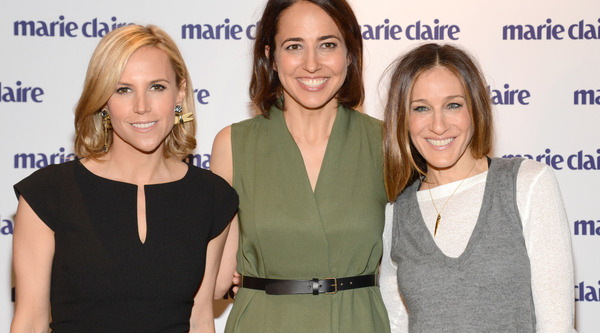 (NEW YORK) The Equal Pay Act’s 50th anniversary equaled a prime occasion for Marie Claire to assemble quite the (mostly) ladies brigade for a luncheon at Marea yesterday. A few highlights? Katie Couric and Sarah Jessica Parker…sharing reading glasses! Tory Burch revealing her days on an Alaskan fish cannery. (No, really.) The power set also included New York Senator Kirsten Gillibrand. Also there, in spirit: Serena Williams, who was on the invite but was, alas, a bit too busy winning the French Open to make it for lunch.

More excellent bon mots from the meal? Marie Claire EIC Anne Fulenwider‘s connection to SJP, which might not be what you expect: Once upon a time, Fulenwider was a P.A. on one of Parker’s (now-vintage) flicks, If Lucy Fell. And speaking of SJP, the actress (and soon-to-be shoe designer. #finally) almost didn’t accept the luncheon invite, not for scheduling reasons, but (humble alert!) because she thought there were more deserving women who could’ve been there. Modesty much?! On the saucier, but no less reality-grounded (unfortunately) side of equal opportunities in the workforce, Couric addressed sexual harrassment, albeit employing a bit of humor in the process—during her ice cream parlor days, a male coworker asked if one breast was bigger than the other due to all that scooping. Also! Before Burch had an eponymous fashion empire of her own, the designer put in some time folding sweaters at Benetton.

Besides those anecdotes and funny moments to digest, chef Michael White’s oceanic edible masterpieces included halibut blanketed in salsa verde (evoking Astroturf in appearance, quite whimsically) and bedded with morels, tender seared scallops strewn with fernheads, a mushroom risotto, the obscenely delicious and decadent pairing of lobster and burrata, and a chocolate and grapefruit semifreddo. For those passing on midday vino, the nibbles could be paired with sips of the Ledbetter, a tart take on the iced tea-lemonade amalgam usually known as an Arnold Palmer. As the lunch wrapped around 2 p.m., a surprisingly large portion of the room didn’t budge, instead lingering to chat some more. Was it the rain still downpouring outside? Or the chic, powerful crowd? We’re going to go with the latter.
ALEXANDRA ILYASHOV