Ports 1961 Rolls Out A Handbag Line 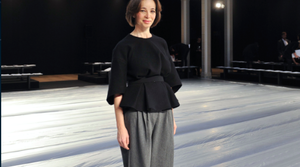 (NEW YORK) Ports 1961 is delving into the accessories business, thanks to a new line of handbags set to debut for Fall 2014. Designed by creative director Fiona Cibani, the line is comprised of four styles to be released in different colors and materials. The line will be called No. 10 Bag, in homage to the brand’s signature Blouse No. 10. While some of Ports 1961’s collections have been accessorized before, this will be the label’s first stand-alone collection. Prices will range from $820 to $2,187 and the line will be unveiled in February at Banner, a Milan-based luxury boutique and at the brand’s flagships in New York and Paris.

But that’s not all the brand has in store for Fall: A new version of Blouse No. 10 will also be launched this Fall and retail for $820. Also on the Ports 1961 docket: The brand plans to open a 19,376-square-foot flagship in Shanghai as well as a store in Hong Kong. The new retail spaces will be designed by Toronto-based design firm Yabu Pushelberg and the New York and Paris flagships can expect a makeover to reflect the new look. Ports 1961 is owned by the China-based Ports Design Ltd., which boasted profits of $55 million last year.

Kiehl's Teams With Alica Keys On A Worthy Cause