Pony Tales: An Interview With A Hamptons Horse 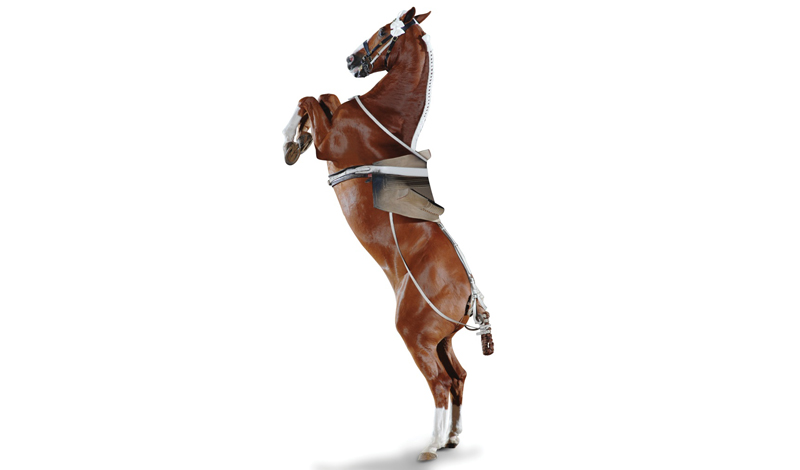 Meet Grass is Greener, the East End’s most outspoken retired racehorse. After a drug-fueled career on the international circuit, he’s clean, sober, happier than ever, and living out his days in a trailer in Springs. We stopped by to say “hay!”
BY EDDIE ROCHE

Hi there, fella. How’s it hanging?
Twenty-three inches and slightly to the left.

Pardon?
Sorry, that was a little barnyard humor. I’m alright, I guess. The flies are driving me nuts, but what else is new?

How did you end up in the Hamptons?
I was bred outside Buenos Aires, but never really knew my parents—my dad was a famous stud and my mom was completely lame. I was shipped off to Kuwait at 24 months, and lived in nine countries by the time I was four. By six, I was mixed up in the dope scene, doing all sorts of stuff to get by. Selling my seed, cheesy calendars, bit parts on Dynasty, the whole nine yards. I bottomed out at Saratoga in 2010, kicked my groom in the face, and finally got sober. They put me out to pasture in 2011, and it’s been one neigh at a time ever since.

Sounds pretty glamorous.
Oh, the stalls I’ve slept in! A few weeks in Dubai here, a month in Wellington there, day trips to Kentucky—the nice part of Kentucky. I had a mare in every stable! No matter how doped-up I was, my grooming was impeccable. I sowed my oats, kid!

Sure sounds like it. Are you friends with the other retirees out here?
Some of them, sure. I don’t hang with the jumpers, though. They remember me from the old days and have trouble understanding my accent.

What about the working horses?
The neigh-listers, you mean? They’re over at Maidstone Stables and Rose Hill Farm acting like their you-know-what doesn’t stink. Trust me, it does! You can smell it from across the street. I mean, the egos on these kids with their Hermès saddles and titanium shoes.

Do you ever miss the high life?
I still get a taste now and then. I can go to my grave knowing I’ve had Madonna’s legs wrapped around my waist and that my barn was in the April 2003 issue of AD. We’re all headed to Elmer’s Farm eventually. All this pageantry is a bunch of B.S.

How’s your diet going? I know you were trying to slim down for summer.
I’m pleased to report that I finally kicked my molasses habit. The steroids trashed my kidneys so I’ve gotta be careful.

What’s the hardest thing about being out to pasture?
These days? Not too much. I’ve still got people on my back all day long, which is murder on my quads, but it’s mostly kids now. It could be worse. You should see these little monsters. The other day I heard one of them complaining that she was late for her massage! She’s nine! I just try to laugh.

Do you ever get teased about your name?
By who? Lovely, Lovely? Lollipops? It’s sort of a mutually assured destruction situation out here.

Whose shoes would you never want to gallop in?
I don’t envy the crew in Central Park, that’s for sure. When they aren’t dragging lard-assed tourists around, they’re posing for selfies with their pimply kids. Talk about indignity!

What’s your favorite day of the year?
Like most of the locals, I pray for Labor Day.

Why are you so dressed up, by the way?
It’s called dressage, son. I’m old-school. I thought this was a serious publication!

The Next Generation: Palmer Taipale