Lauren Grossman Reveals The Secrets To The Success of Planet 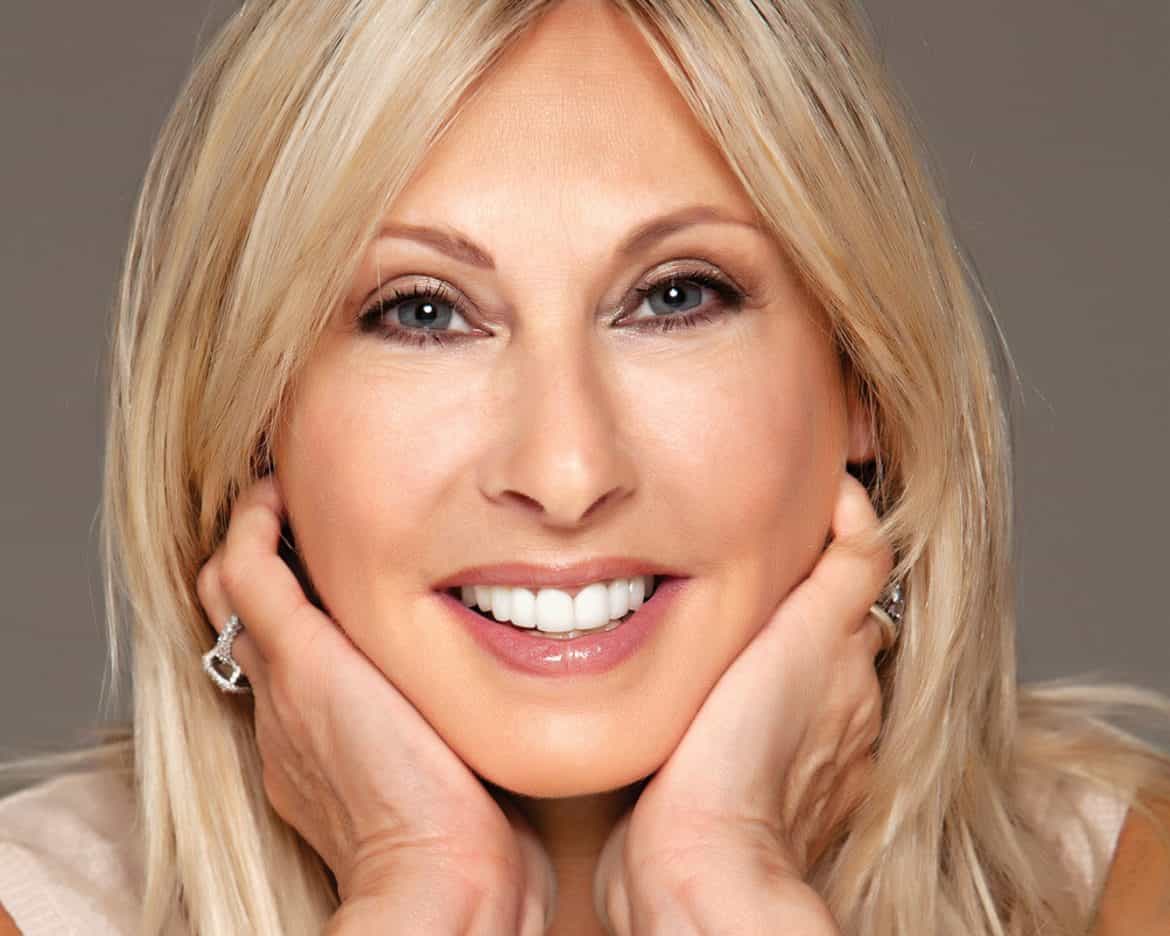 Planet founder Lauren Grossman is a self-made woman who has created a brand that’s giving women globally exactly what they’re looking for. She tells THE DAILY her remarkable and inspiring story of how she self-funded the line, survived cancer (twice!) along the way, and now wants her designs everywhere on the planet.

Tell us a little about your background. What were you doing before Planet?
I was a multiline sales rep in the southeast, from Florida to Atlanta. I had showrooms in both locations, and I would go on the road to all the boutiques.

Was that the inspiration that made you say to yourself that you could do this?
Exactly. After 10 years of working with so many different artists and manufacturers, they would always come to me when they were going to present the line. They asked if I liked their color palette, what should they name the color, what do you think of this? I said to myself that after 10 years and only making 10 percent commission, I’m going to put my money where my mouth is and do this myself. 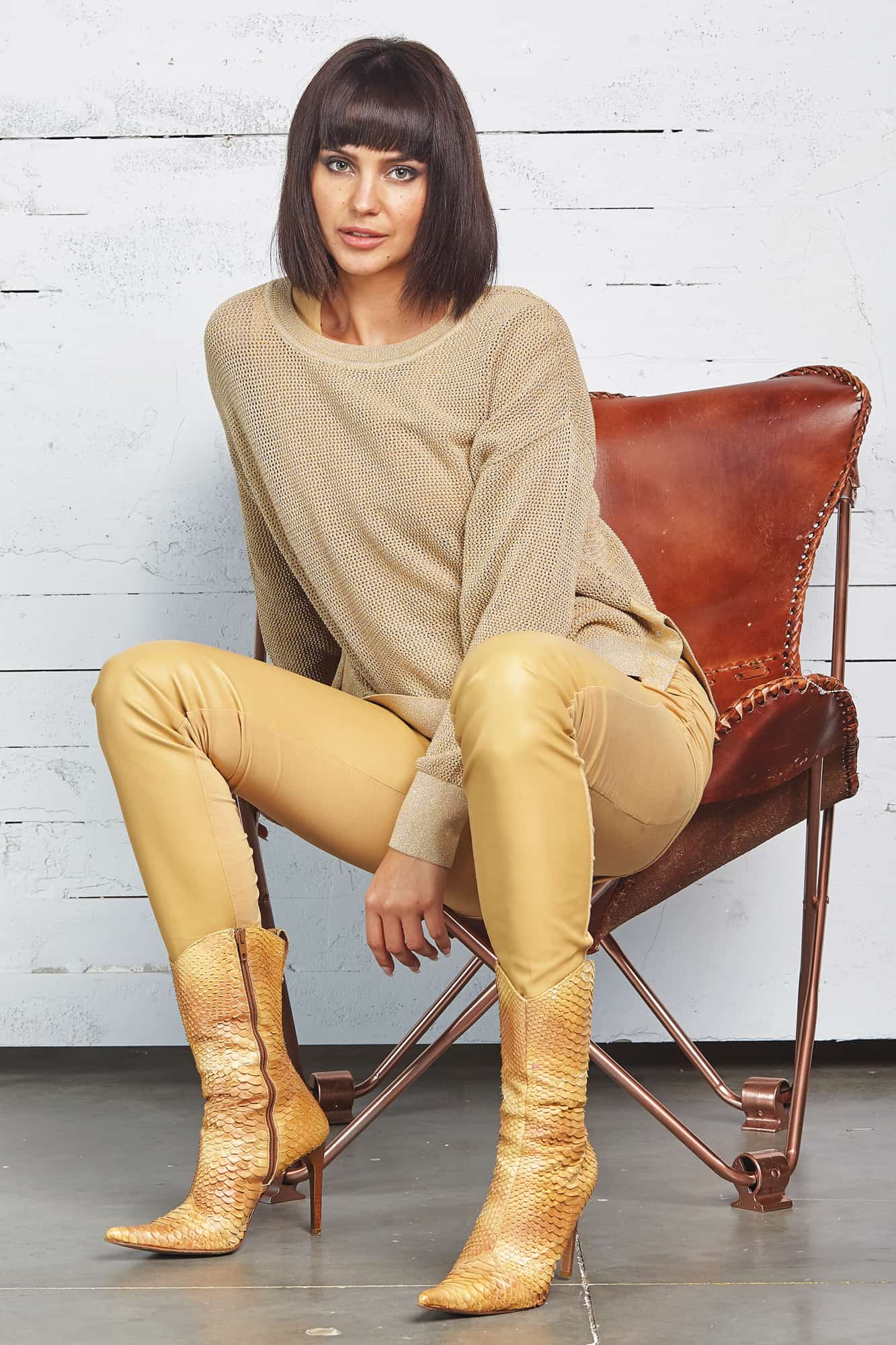 How did you even do that? Did you have to find an investor?
I had some money in the stock market in the mid ’90s and the NASDAQ was going crazy and doubling all the time, so I took my money out of that and started with that seed money for Planet. I knew nothing about manufacturing. I had a friend who was a manufacturer in the industrial area in Miami, and I called him up and said I wanted to manufacture. He took me and showed me what you had to do as far as fabrics, the width of the goods, laying them up, how to make a wholesale price, everything about the background mathematics to make this work. We went through that money real fast! I did a New York trade show and it was an instant success. I then had to go home and get more money to manufacture it. I took a home equity loan on my own house. I put up my own money. I’ve never had to borrow a dime, and I don’t owe any money. Because of my background of being a sale rep, we always waited for our money. I’d ask for my check and waited. I always said if I hired a sale rep, I would always pay them immediately. Twenty-two years later, ask anyone, I don’t owe a dime. I live that way because it was hard for me wondering where my commission was.

Did you always have a passion for fashion?
OMG! I came out fully dolled up. I was obsessed with Barbie. She came in this plastic and you’d have the shoes and the handbags and the earrings. It was never just about putting shorts and a T-shirt on her for me. It was always about the whole package. I also have a sister who is 13 years older than me. Growing up in the 1960s and seeing her get dressed up to go out in this iconic Vidal Sassoon haircut and black eyeliner with these mod dresses with go-go boots, I was in awe. I just wanted to have that for my Barbie doll. Going into the 1970s, when I was in fifth grade, my sister went into Manhattan and bought me platform shoes from a London designer to wear with flare-bottom jeans. I was like 60 pounds. My sister would take me shopping for clothes and one year my mom said, “Show me the clothes,” and I came out with this long maxi coat and this hat on my head. I opened up the coat and there I am in hot pants, granny boots, and fishnet stockings. Fifth grade! My mom goes, “Where’s the school clothes?” and I said, “Mom! This is what’s in fashion!” I had a 60th-birthday party last year with all these old pictures of me, and one of the girls who works for me said, “You look like baby Anna Wintour!” 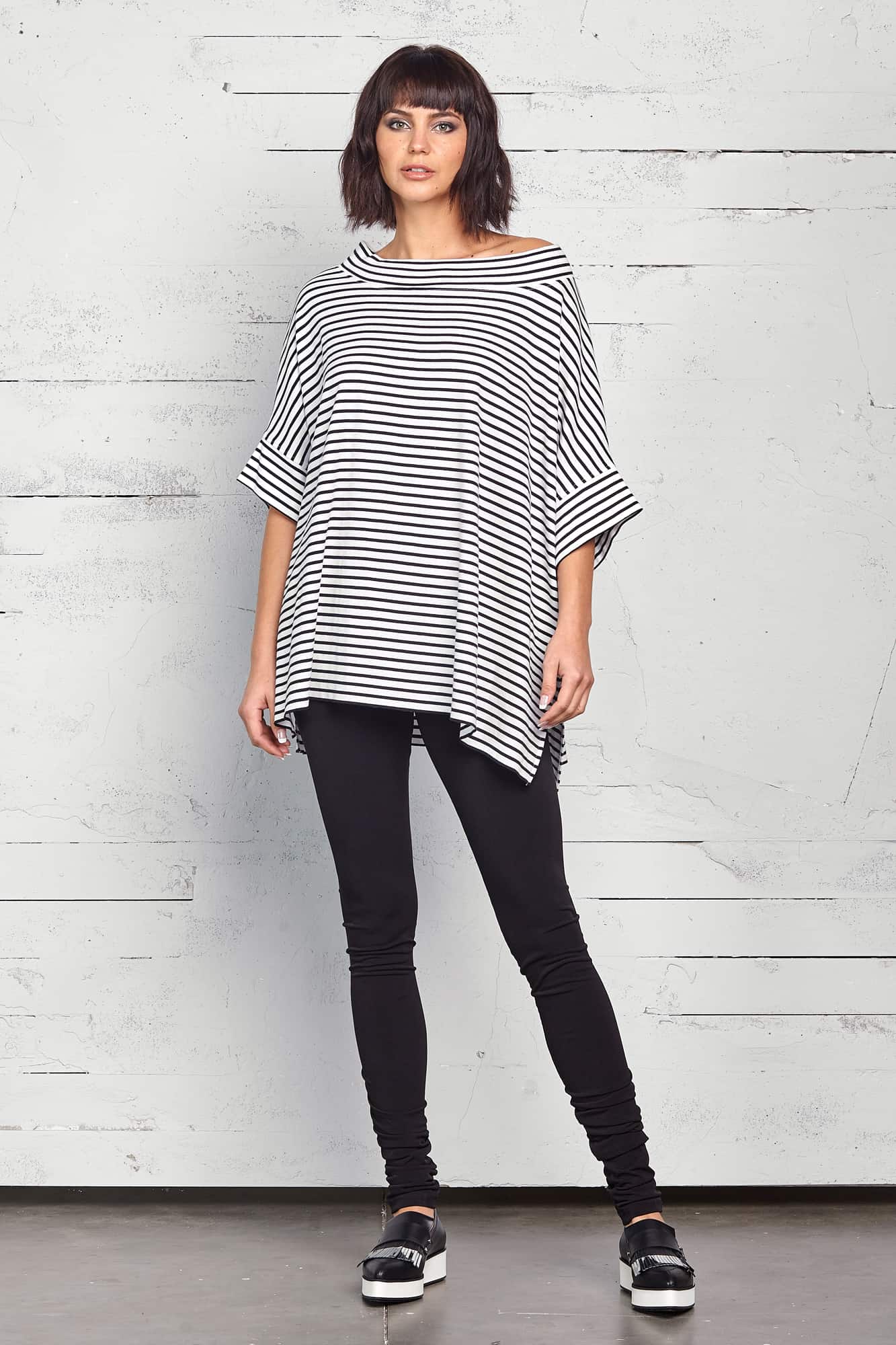 Do you still have the Barbies?
We moved to Florida when I was almost 16 and at that time my mother said, and I quote, “You’re going to be a teenager, you’ll move to Florida, you’ll get a boyfriend, you’ll forget about Barbie!” She made me give away my Barbie house, my Barbie pool, my Barbie car, everything Barbie went to my younger cousin. I don’t have any of it. I wish that I did.

Sorry! Why is the brand called Planet?
When I started I was looking for fabrics that were all natural elements, natural fibers like cottons and linens. They were elements of the earth, and the colors that I chose were always muted colors and also derivative of the earth, like sage and cloud and sun. It created an environment, and that’s how Planet came about.

Where is it made?
We have pima cotton T-shirts and sweaters that are made in Lima, Peru. We have a pretty large factory there. They are the No. 1 producer of pima cotton in the world. All the wovens are made in Miami. 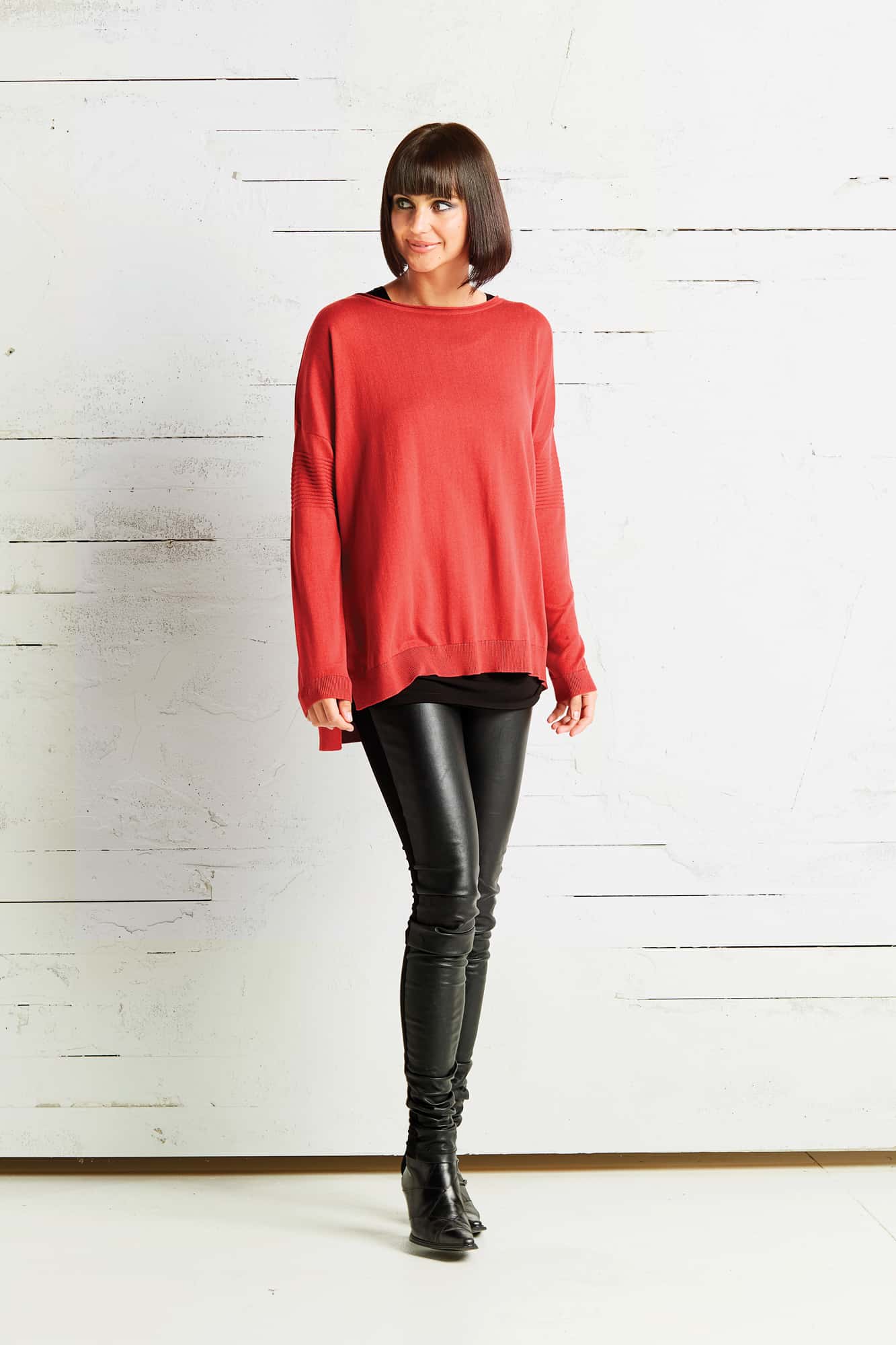 You have a ton of positive energy! What’s your secret?
Clean living. I exercise all the time. I eat pretty clean. Most of all, this journey of becoming my own manufacturer and creating my own destiny, I have so much gratitude for what I have accomplished. I’m in a really good space. I’m grateful every day. I had cancer twice. I had cancer when I was 28 years old, and at that time I was selling the Madonna bustiers. That was the whole look. I’d go across the country with them, and they told me at the same time that they had to cut me open. I said, “I can’t do that! I have to go around!” I was strutting around the country. I was not stopping for cancer. Luckily, I got it into remission. Then 10 years ago, I had breast cancer. I thought, “Oh, no! Just when things are going to great with Planet, I’m going to lose the business.” Well, it just kept going. I got through that. I’m a two-time cancer survivor and that gives you a lot of gratitude.

What’s your advice to anyone going through cancer?
You have to keep a positive mental attitude, and it’s not so bad anymore. You will get through it. There is an other side.

You’re based in Florida. Is it harder doing what you do there?
I’m originally from New York. I’m a Long Island girl. Throughout my career, I’ve always had a New York presence. Whatever trade show there was, I took a big booth and decorated it to the max. I wanted to create the visual impact before you even knew the concept of the line. I wanted to draw in the people and the traffic. Whatever New York had to offer, I was in it to win it. It didn’t matter that I was based in Florida. I think being in Florida and being a native New Yorker, you have a competitive edge. New Yorkers are aggressive people. In the past five years when Planet really started to soar, I opened up a New York showroom and hired Lisa Attea, a director of sales who is now the vice president. We do have that New York presence. 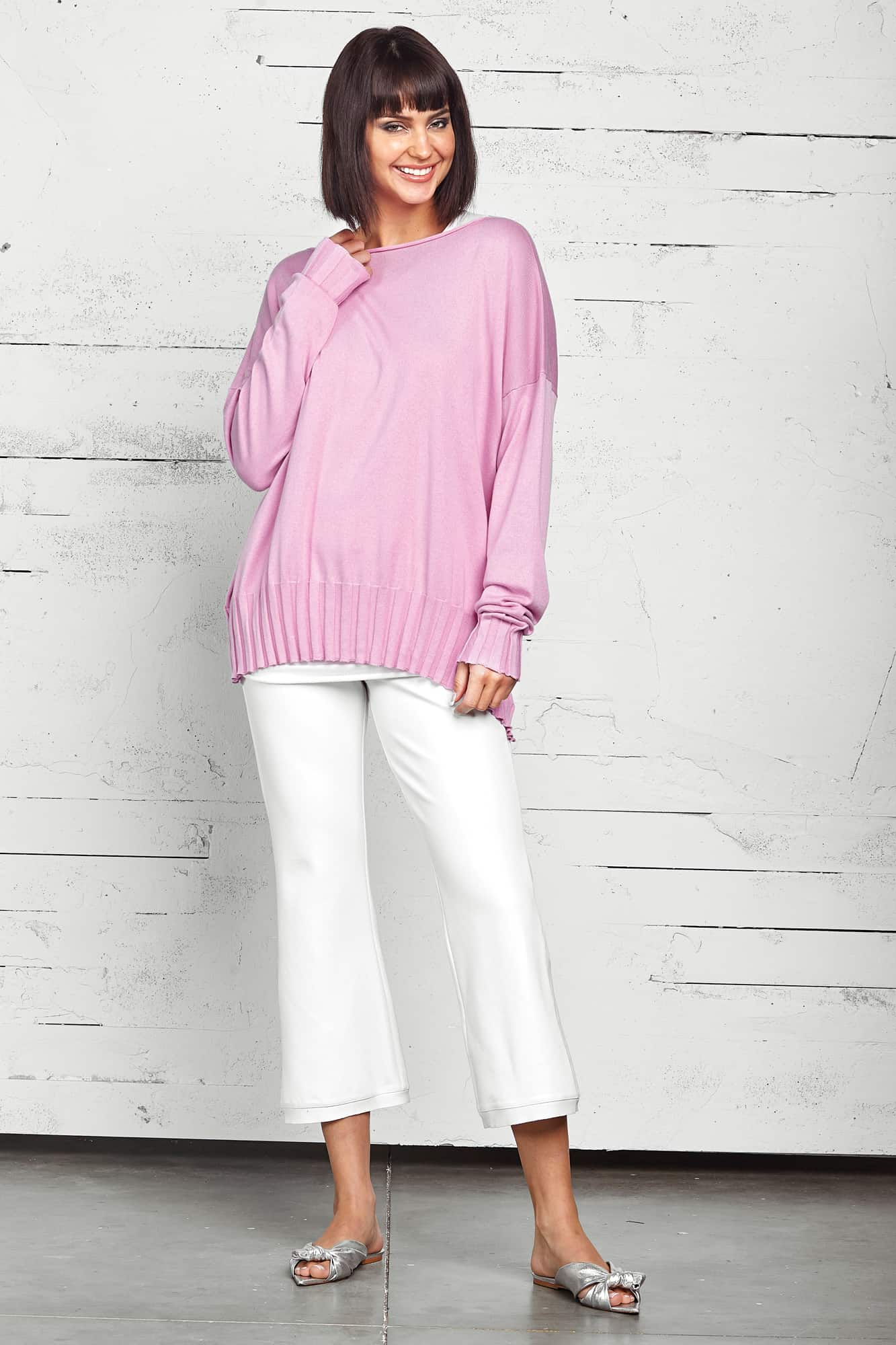 Why has the company grown so much in the past five years?
Once the buyers got the product in and saw how it sold, they made their margins on it, so they’d constantly reorder. If the customer bought the sweater in black, she’d say, “What other colors does it come in?” We’re a layering concept of clothing, so the more you put on and buy, the more different options you have. The market share is getting larger and larger with each customer. I also said to boutiques, give me part of your real estate, like a store-within-a-store concept, like Ralph Lauren did back in the day. I went around to stores and I created what I called a Planetarium—a whole area of Planet. I hired someone within my company and named her the Planet specialist. She would fly to these stores and do what you would call a trunk show, but we’d call it an in-store event. Now they had the most Planet on the floor, and my Planet specialist would come in and not only train their staff, she would dress them in it, dress their mannequins. We would do these events twice a year for Spring/Summer and Fall/Winter. It created a buzz in the stores and rang the register.

How do you want to see the company grow?
The company should go to the moon and back. I see it everywhere as sizeless, ageless, seasonless, chic clothing. It’s infinite. It has no end.

Where can people find the brand?
We sell in better-end boutiques all over Manhattan and Long Island. We also have a distributor in Canada, New Zealand, and Australia. It’s a global brand. It’s all over the planet. When the pandemic hit and the world was shut down, we opened an E-commerce site [shopplanetbylaureng.com] so our addicted customers could still purchase. Business never really stopped.

Who do you look up to in the fashion world?
My muse is Donna Karan. I read her book, My Journey, and there were pages in there describing her Seven Easy Pieces concept of dressing. I started to shake. I called my sister and read it to her. I said, “Listen to this! She wants a cotton shirt, leggings, a skirt, a sweater,and take it from day to night.” That is Planet! You can go anywhere in the world and you pack a small suitcase and take these seven layer pieces with different shoes or accessories. I also loved her no prints, basic colors. That was a rich, beautiful line. 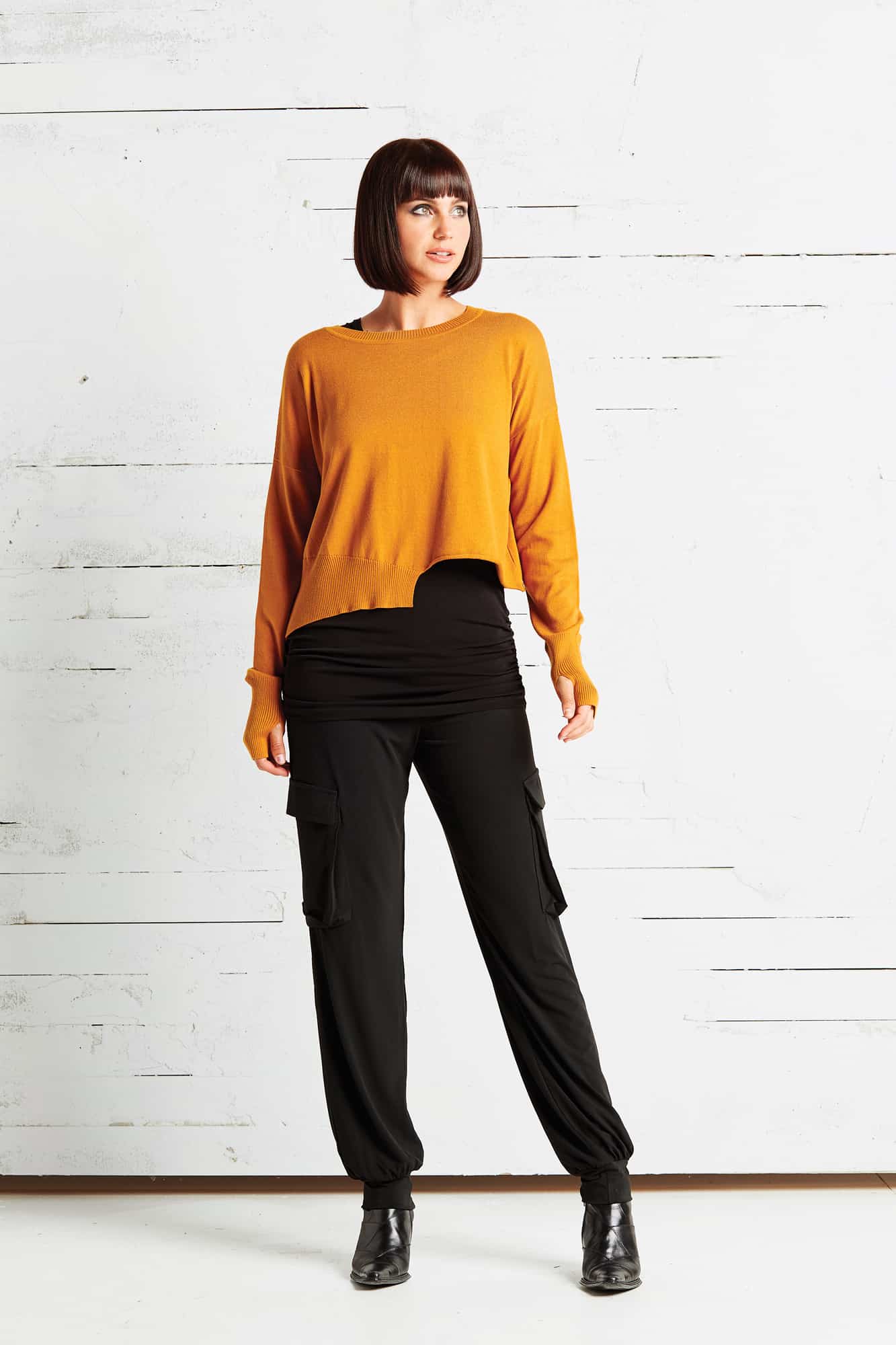 Do you see Planet getting as large as Donna Karan? Are you interested in that?
It’s absolutely possible. I could see that happening. I could also see Planet flagship stores all over the world. That could be! It would take a lot of money and energy, so I better stay well!

All 26 Vogue Editions to Unite for First Ever Global Issue — Including a Letter From Gov. Cuomo