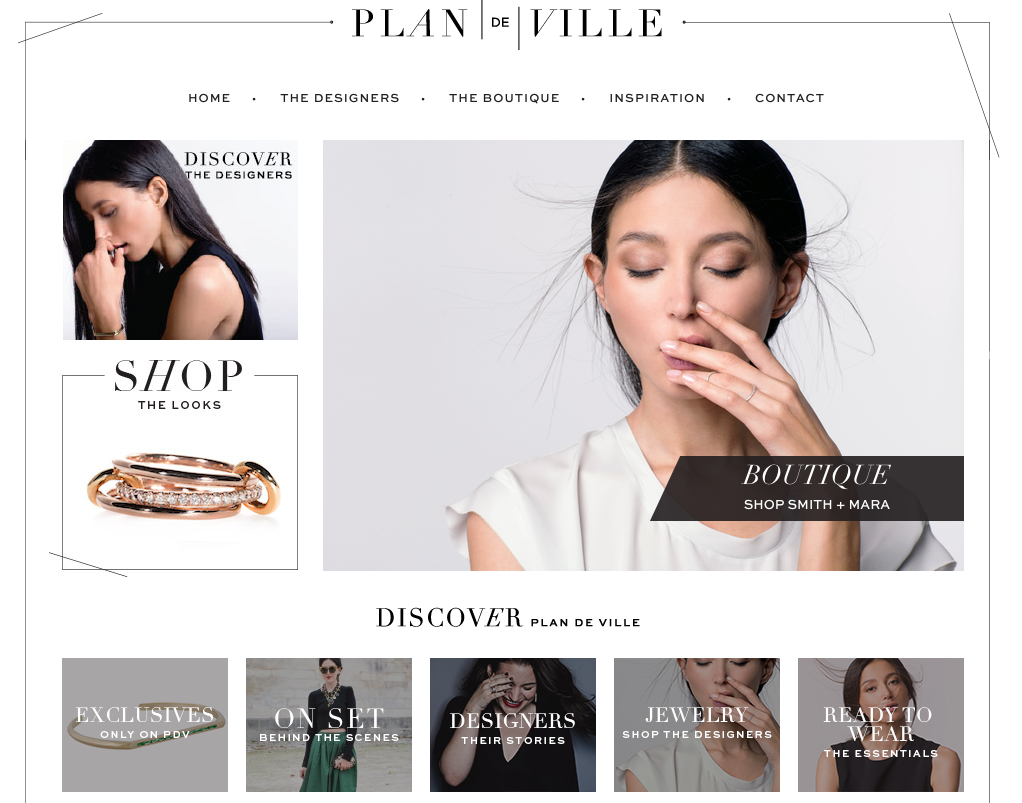 With a slew of e-commerce sites popping up nearly every day, it’s hard to pin point exactly why you should be shopping all of them. But Fashion stylist and writer Catherine Smith has come up with a saavy new idea called Plan de Ville, a new e-comm site devoted to selling and introducing emerging talent to a broader audience. It’s hard to find pieces that no one else has these days, but this site might have just what you are looking for. We caught up with Smith to find out what it’s all about and who she will be launching first when the site debuts on November 4th.

This sounds like a really cool idea. What were you doing before this and how did you come up with this idea?
I was actually in house on staff at Brides magazine for the last two years. In May, I began styling full time and writing, while still freelancing for Brides. I started working on this project, because I loved watching and working with emerging designers and it was always really rewarding if I was able to get them into a shoot or feature them in the magazine. I thought it would be great if I could feature them myself in a new platform where the focus is on emerging talent and put them on a platform to raise awareness and exposure. The idea was to start with storytelling and to feature long form interviews with designers and pair those with e-commerce.

How long were you planning this before you were able to get it going and launch it?
I had an idea of this around the beginning of the year. I was pulling things from emerging designers either way or wearing them around my friends and people just started to say, “Oh I really love that bag!” or “That’s a really cool earring. Where could I get that?” The problem for emerging designers is that often there’s no stock available or there’s nowhere to shop it online. After I heard this again and again, I thought maybe I could help these designers reach a different audience. So I began working diligently on this over the summer around late May, early June.

How do find the designers?
I’m always on the hunt. As a stylist, obviously I go to market appointments all the time and to trade shows. But to tell you the truth, I find a lot of great designers through social media, especially Instagram. I found a couple designers like a handbag designer from Dubai last week Her name is Lillian L’Ashfar but her brand is just L’Afshar. I was here in New York during the last market in Paris, so I wasn’t seeing the designers then, but I happened to see an amazing photo on Instagram and I emailed her sale showroom right away to have a conversation with her right away about having her on CDZ. A lot of the designers I had already been working with, either I had already shot them for a story or I had put them on someone I dressed. I was totally blown away by the response I got from the designers in the beginning and that’s what motivated me and gave me the confidence that if the designers are game for the idea of sharing their stories and picking my conservative ecommerce buy, then I thought people would be interested as well.

Will you keep a designer on if they are no longer emerging?
The goal is to let them age out in a sense, so if a designer is consistently carried on other major ecommerce sites or major stores, then they are no longer going to be a fit for us. That said, I’m really proud to be working with designers who are just about there. But the criteria is not so set in stone, we’ll see how it goes for people and in terms of deciding outright if a designer is a fit, I look at where they’re carried, how long they’ve been in business, how big their team is. If I think making a buy and having a stockage of them would be helpful, then we go forward.

Who is the designer that you say is already kind of big?
We work with Spinelli Kilcollin; so Yves Spinelli is fantastic and his jewelry has been getting a lot of attention over the last 6 months. It’s excellent.

How many designers will you be launching with?
We will be launching with about 8 designers including SMITH+MARA, giantLION, Lizzie Mandler, Elisa Solomon, Dillon des Prés Co., Mirlo, Spinelli Kilcollin and Marcelo Giacobbe. L’Afshar and Fete will deliver for Spring/Summer 15 (in late January/early February); however, their spotlight interviews will run before then.

Where do most of the designers hail from?
They’re from all over, but predominantly based in New York and Los Angeles. I have a designer that’s based in Virginia and someone who is based in Buenos Aires, as well.

What is the price range?
It’s kind of broad. The most affordable thing from the site are some of the jewelry, which begins around the $200-range. giantLION for instance is on a more the approachable level. I think her earrings begin at $100 and go up to around $350. On the other end we have people like fine jewelry designer Mandler with her 18-karat gold, white diamond, and emerald cuff that could be $3,500.

Is there a particular aesthetic that you’re looking for or is it more about the designer and their whole collection?
The aesthetic is really clean, minimal, sort of elevated basics you can wear everyday. I tried to look at the designers collection and tried to make a really targeted buy, which I think a wide range of customers could enjoy wearing and integrate into their own personal style in an easy way, while learning about the designer. It’s more than just the object. It’s about relationships and connecting, not just shopping. It’s really all about the designers, so even if it’s on social media, which we are launching obviously, with the site next week or with the packaging, we are putting these social media cards in the boxes telling the customers how to connect directly online and engage with the designer that they purchased the piece from. I’m really excited about that. The entire experience is meant to be very personal and this is just an arena to expose and support and celebrate new talent.