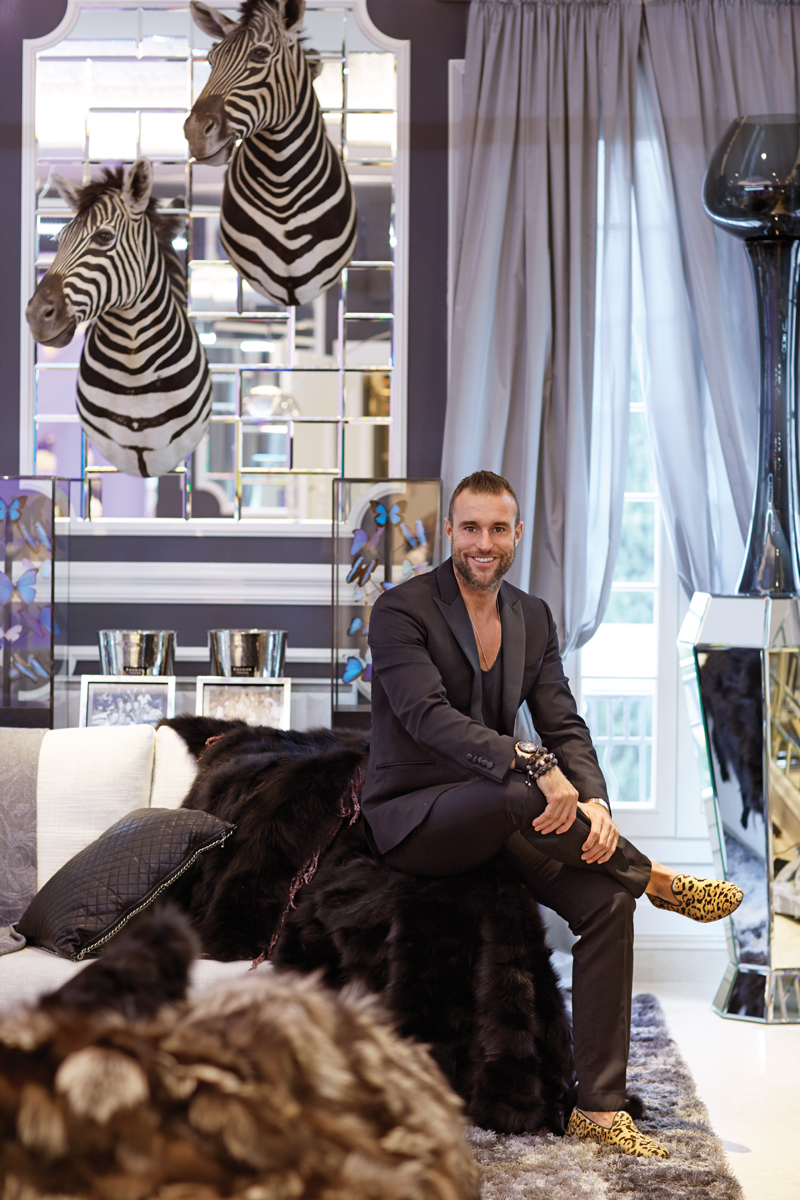 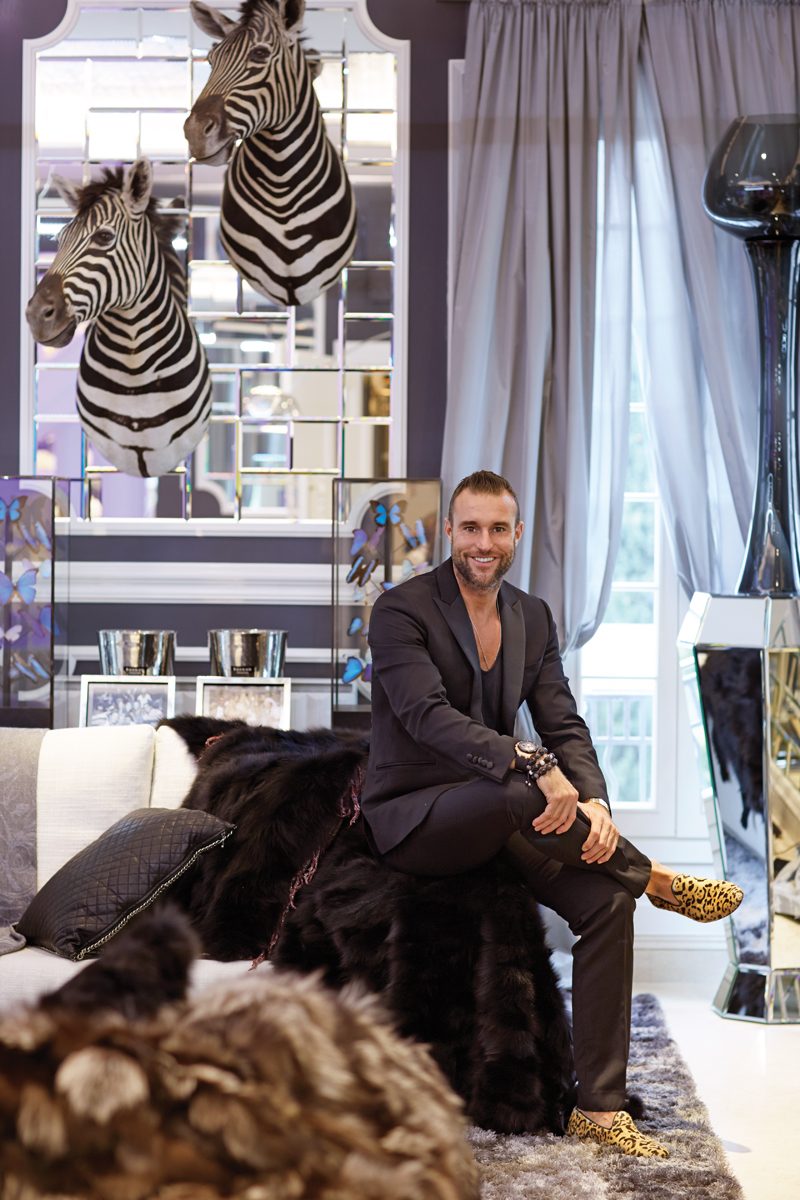 Philipp Plein at his home in Cannes, France

Designer Philipp Plein has homes and offices in more places than we can count on our fingers. And what does he do at them all year? #workworkwork. Thank goodness for August in the South of France…

How did you spend your childhood summers?
In Italy; I’m German born and raised. Germans used to go on summer vacations by car to Italy; within three to six hours, you’re at the seaside. We always went to the lakes, and there is a hotel called Villa D’Este that still exists. Different little villages on the Adriatic Coast. Nowadays, I have a house in the South of France, in Cannes, and we adore it. It’s a place where I can work and concentrate.

Ever go back to Italy for nostalgic purposes?
I have a house at Lago de Lugano in Switzerland, my main residence, basically 10 to 20 minutes from Lago de Como in Italy. Our office is based in Lugano as well. You have the Italian atmosphere, but with the Swiss infrastructure and security system, which is really nice; so you have the best of both.

How much time do you actually get to spend there?
That’s our headquarters, but we also have offices in Hong Kong, New York, Milan. So we are always moving.

And you’re building another home in California?
I’m building a house in Bel Air, which will take more than two years to finish. Bel Air is beautiful because you’re in the city, but you are in nature. When I’m in my house, you can see the sea, there’s only green around you, you barely see any neighbors, and in 10 minutes you are in Beverly Hills.

Where do you go in the summers when it’s purely a vacation for you?
Well, we work during the summers because we work in fashion, just like you do at a magazine. You are always up on the trends, so you have to be close to what is going on. We are always working. I am happy and blessed that I can work in beautiful places, which feels like vacation for other people. Every August I go to the South of France and stay the whole month with my team working there. I combine my work with my personal life.

Okay then: When was the last time you took a vacation outside your home?
I don’t remember! For me, my job is my passion and my everything, so I’m not complaining about it. When I’m in Cannes, I’m in a beautiful place, the sun is shining, the beach is there, we have beautiful dinners and nights out. I can relax like that, and I’ve adapted myself to that.

Are you more of a beach person or a pool person?
My house is on the hillside, so I can see the seaside, but we have a pool, a cinema theater, different dining rooms, a gym, a sauna, a spa with massages every day; you don’t have to necessarily go out. Sometimes we stay there a week, and we don’t go outside because everything is inside; then we are more at the pool. I like the beach a lot, but you have to find the right spot where to go.

Plein backstage at his Milan Fashion Week Menswear show in 2014

Where are some of your favorite spots?
In the South of France, when you go to Rustrel, which is like 20 minutes from Cannes, it has red rocks. It’s preserved nature, and they are not allowed to build any more houses, but it’s amazing over there. We used to go every week to Capri, which is close by.

Got any restaurant recommendations?
I spend most of the nights in Monte Carlo. I go to Jimmy’z Monte-Carlo—we have a Philipp Plein–sponsored lounge in the Boom Boom Room at Jimmy’z. In the summer, everywhere in the South of France is a party. On Fridays, we would stay in Cannes, and go have dinner on an island. There are these two little islands with no houses, just a cloister. You take a boat provided by the restaurant to get there, eat on the beach, and then the boat transports you back.

What’s next for your company?
We have a lot of retail stores, more than 80 worldwide. We are now at the point where we have to focus on the U.S. We are completely new here, and we are unknown, even though it’s one of the most important economies in the world. We have the store on Madison Ave., a store on Rodeo Dr. in L.A., one in Miami, two outlets, and the next will be in Atlanta and Philadelphia.

What has surprised you the most about the U.S. market?
When you go to New York, can you really say New York is American? New York is very European in my point of view, very international. Going to Philadelphia would be more American. I think that New York is a different animal. For example, guys have their way of dressing: When they go to work, they have on a suit, and when they are home, they put on sneakers, jeans, and a T-shirt. I don’t think that the average American man is really into fashion yet. It’s getting there, but it’s still developing. In Europe, men are buying brands like Prada, Dolce, Gucci, etc. I don’t see so many American men wearing these brands yet. You can tell where people are coming from by the way they dress.

Along with #workworkwork, you often use the hashtag #wearebuildingabrand….
We are building a brand! Creating a brand today is so difficult because I’m not part of the new economy, like Instagram and social media. I’m representing the old economy, where the product you sell is something you can touch and feel. We have to deliver, and we have to perform.