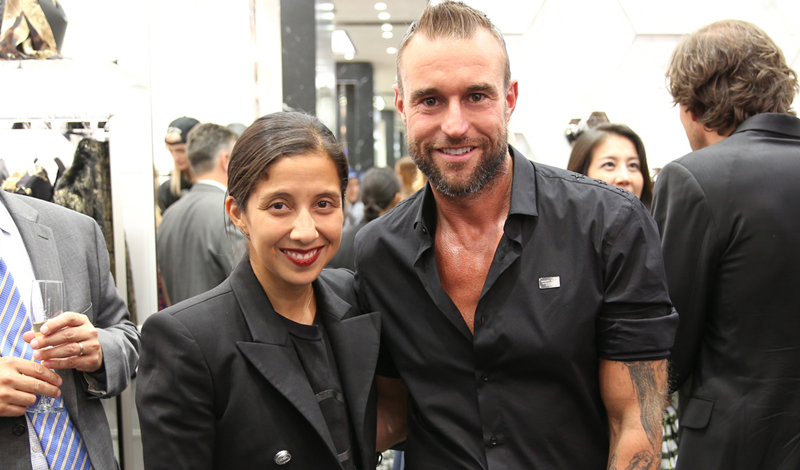 The new master of rock n’ roll chic, Philip Plein opened his first New York store this week at 625 Madison Avenue. To fête the new tony address Plein invited the fashion pack out to purvey his array of furs, rhinestone studded jeans, crystal encrusted leather jackets, and all manner of fringe and ripped just right attire. It’s Plein’s second store in America with one already (fittingly) in Miami, while a third one is slated to open this year on Rodeo Drive. We caught up with the Swiss-born designer beneath a skull-themed chandelier at the new boutique to find out how he’s making his mark stateside.
BY PAIGE REDDINGER

What does it mean to you to be opening a store on Madison Avenue?
It’s very exciting, of course! It was always a dream for me to have a store in New York. The first time I came to New York, I was 14, so it’s been 22 years now. Now I’m 36, so it’s been nearly a decade. I never imagined that I would work in fashion and have a store here. I know the city very well, because when I was 18 I had a girlfriend that I met in the Hamptons and she was living on the Upper East Side. So I’m quite familiar with the neighborhood.

Were you living here or dating this gal long-distance?
Well, I was here to look at universities. I thought I was going to go to law school.

How long did it take you to find the space on Madison?
We were searching for awhile. I wanted to be on the Upper East Side: it’s the place to be! We wanted to position ourselves in a good neighborhood. There wasn’t a lot on the market; there are high rents and little availability. We were looking for more than a year.  There were a lot of negotiations with a lot of landlords. But we found the right space; it’s 1,700-square-feet.

You’ve been open for four days. How’s business?
We’ve got a good sensation about the U.S. market. We just opened in Miami last year, so this is our second store. In two months, we’re going to open on Rodeo Drive, right across the street from Louboutin. But according to the sales, it’s right within our expectations so far. We track where all the clients are from and there are a lot of clients from Asia, Russia, the U.S. , South America shopping here so it’s a good mix. I like the footfall here, too!

Do you have a lot of rock ‘n’ roll clients?
Yeah, there’s a guy from Aersomith here!

You’re very tan. Where have you been?
I have a house in the South of France. I was there with my team and we were working from there, because my house has 13 bedrooms. It’s half vacation, half work. We have stores in Monte Carlo, St. Tropez, Cannes, and around those areas.

Wow. It sounds like you’re really expanding!
Every week we hire 10 people on average.