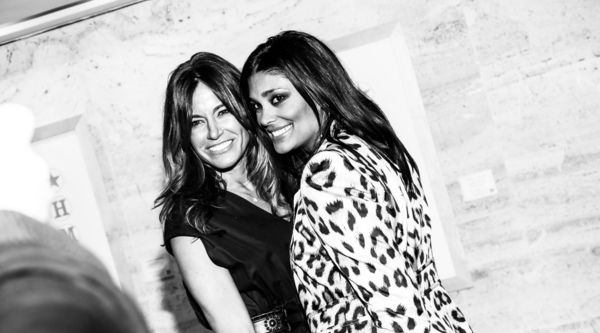 (NEW YORK) Last night, New Yorkers pulled out their best spring looks, apropos for a warm night at The Four Seasons Restaurant for Love Heals,  a benefit for the Alison Gertz Foundation for AIDS Education. As most galas go, this one started with a generous cocktail hour, amidst tasty apps and flutes of champagne. Bill Cunningham, dressed in his finest was snapping photos of the attendees, which included the likes of Mary Louise Parker, Kyle Maclachlan, Rachel Roy, Amy Astley, Julie Macklowe, Jill Martin, Stefani Greenfield, Kelly Rutherford, and Desiree Gruber. Once the drinks were drained, the dinner portion of the eve began. Over lobster dumplings, the event’s MC, Hal Rubenstein took to the stage. His emotional opening speech turned out to be fodder for the rest of the evening, as he shared personal details on his fight with HIV and the vital need for AIDs education, despite the various breakthroughs that have been made in treatment.

Then it came time to award the honorees of the evening with Danielle Snyder and Jodie Snyder Morel of Dannijo, up first and presented with the Young Philanthropist Award. Just how healing is jewelry? “In early 2008 a woman emailed us and asked us to cancel her Dannijo order for a necklace, because she said her chemotherapy was costing too much,” explained Danielle. “We told her not to worry about it and that we wouldn’t charge her, but we sent her the necklace with a note that said ‘We hope this heals you. Wear it in good health.’” Cue the tissues!

Then Architectural Digest EIC, Margaret Russell, presented esteemed event planner, Bronson van Wyck with his award. She was stepping in for Hillary Rodham Clinton who was unable to present the award last minute. And finally, Estée Lauder’s John Demsey, who is also the chairman of the M.A.C. AIDS Fund, was recognized for his philanthropic work. “To date the MAC AIDS fund has raised an astonishing $315 million dollars. That’s a lot of lipsticks!” exclaimed Alina Cho before handing Demsey his award. After brief pause for the main course, the evening was concluded with a live auction, where over $600,000 was raised for the cause. While some attendees were bidding on vacation (and staycation) packages, others just donated thousands to the cause without any prize. And what a generous, selfless bunch it was!