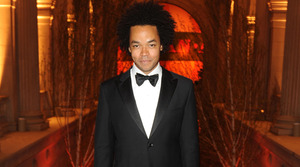 (NEW YORK) It’s been nearly two years since Patrick Robinson was pushed out of his career defining gig at The Gap amidst slightly declining sales and top level management changes. The designer is now taking on a new role as the creative director of A|X Armani Exchange. This won’t be Robinson’s first time working under the Armani umbrella: In 1990, he worked on Le Collezioni White Label by Giorgio Armani. Afterward, he added Anne Klein to his resume where he worked as the head designer and met his wife, Vogue‘s Virginia Smith, who was handling public relations chez Anne Klein at the time. Later he held design posts at Perry Ellis and Paco Rabanne before landing at The Gap in 2007 where he remained until 2011.

At A|X Exchange, Robinson will not only be responsible for product development, but will also have his hands in marketing. He will report directly to CEO Harlan Brachter. We’re looking forward to seeing what Robinson has up his sleeve for the 22-year-old Italian brand. Tis the season for change!
PAIGE REDDINGER