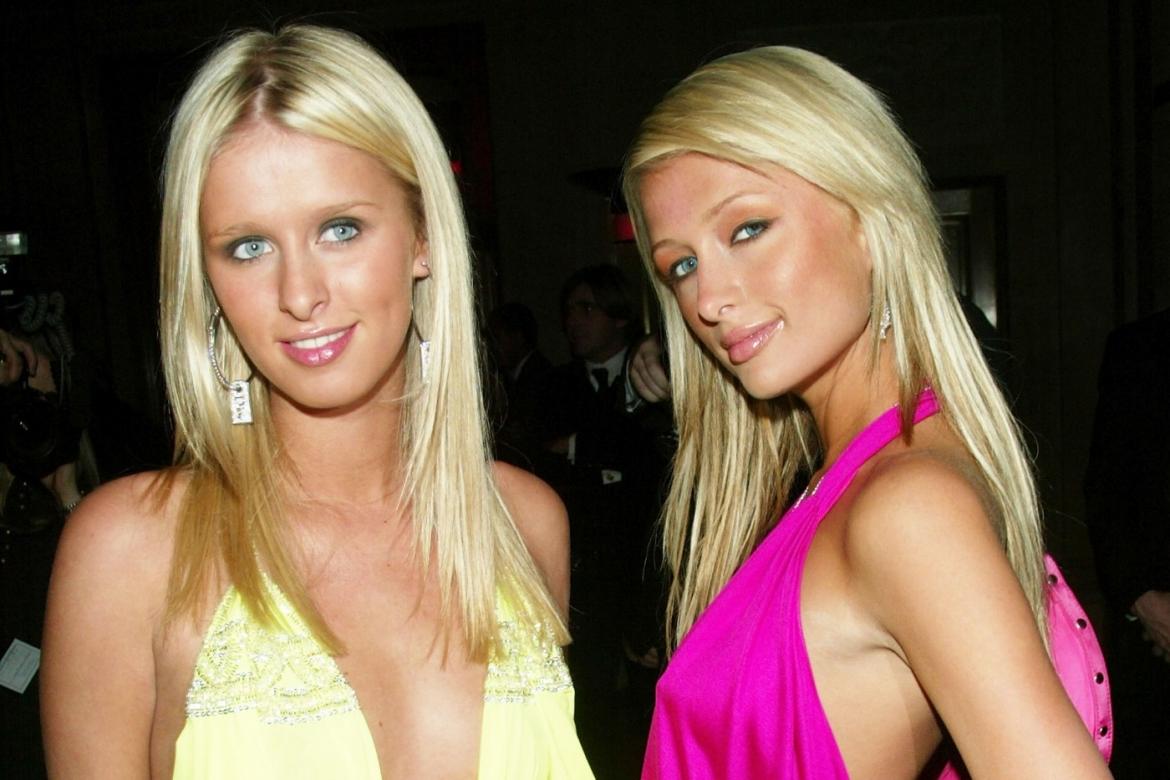 With The Simple Life, that pink Bentley, and Tinkerbell, the first world-famous Chihuahua, Paris Hilton dominated the year of The Daily’s birth (aka 2003). How have things changed for the heiress-turned-DJ? Well, let’s just say the flashbulbs won’t stop popping any time soon.

That was the year The Simple Life started, and it was the beginning of a whole new life and career for me. I had just turned 21, so I was having the time of my life! I hosted birthday parties all around the world: at Studio 54 in New York, at Light nightclub at the Bellagio Hotel in Vegas, in Tokyo and in Europe.

Sounds like it! How did reality TV in 2003 compare to what it is now?

The Simple Life was a pioneer and paved the way for everything we have today. I travel and work so much that I’ve actually never watched any reality show besides The Simple Life and a couple of episodes of Honey Boo Boo, so I can’t really compare it to what’s on today, but The Simple Life was genuine, iconic, and timeless. 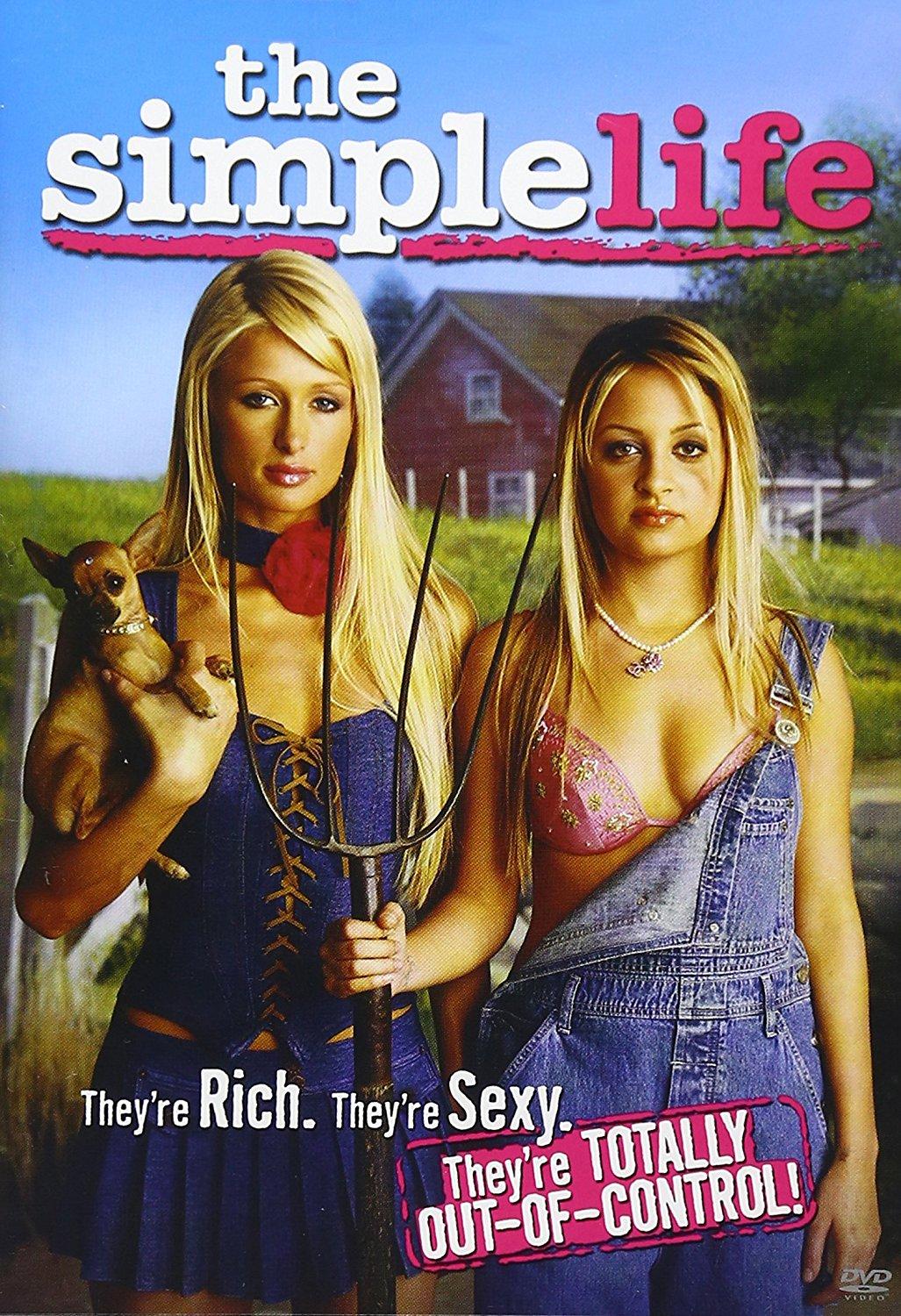 Where were you living?

[My sister] Nicky and I shared a house in the Hollywood Hills. It was so much fun—every night, something was happening. She’s my best friend and one of the only girls I trust, especially back then.

It was definitely before its time—nobody dressed like me. I was the only New York socialite who had a fun, eccentric, Barbie doll style. I was wearing a lot of Swarovski crystals, big chokers, and lots of pink. I loved Von Dutch—now I would never wear it, obviously. [Laughs] I see everyone rocking the same looks I wore back then! I also can’t forget Juicy Couture. I’m so happy they’re back. I probably have 1,000 different Juicy tracksuits in a closet that’s dedicated to my sweatsuits and tracksuits. 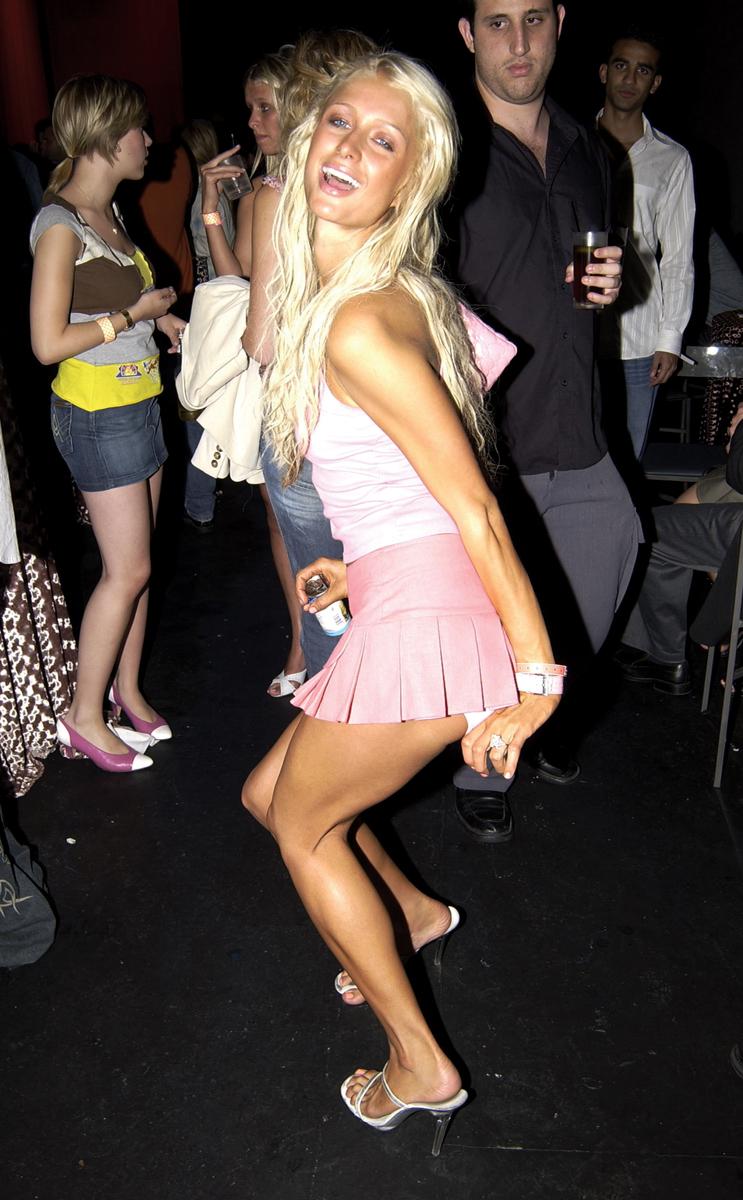 Paris Hilton dances at FHM’s “Sexiest Party of the Year” at Raleigh Studios on June 5, 2003 in Hollywood, California. (Getty Images)

Before everyone had iPhones, people would literally just go out to have a good time. In L.A., I’d go to Les Deux, Dublin’s, Pop, and Bar One. In New York, I liked Bungalow 8, Marquee, and Spy Bar. People weren’t trying to capture pictures and selfies every second. No one even had a phone out! It was a lot more free and enjoyable than it is now. So I built a nightclub in my house!

It’s called Club Paris. I always throw the most amazing themed parties—everyone says I have the best house parties in L.A. by far. I hardly go out anymore unless I’m DJing or there’s an important event or occasion. I like inviting my friends over and being able to be private without being harassed by cameras. I used to have parties a lot more, but since I’ve been in a serious relationship, I like relaxing and cooking.

Do your neighbors complain about the noise?

I soundproofed the entire club.

Do you still have your pink Bentley?

Yes, because it’s a piece of art, and so iconic, but I never drive it, because every time I do, people will literally jump in the middle of the freeway to stand next to me and the car and take selfies. So now, I just like to look at it.

What were your favorite times at New York Fashion Week in 2003?

It was so much fun. All the designers would send Nicky and me similar outfits. We’d love to go twinning to the shows, especially at DVF—we’d wear her wrap dresses. Fashion Week is still my favorite time to be with my sister. It’s a lot more work now, because people will push others over to get to me to take a selfie. Before it was just the paparazzi, but now, everyone’s a paparazzi.

How has NYFW changed for you?

More people used to just watch the show and pay attention, but now everyone’s on their phones trying to capture images for social media. It’s a lot more work now because people will push others over to get to me to take a selfie. Before it was just the paparazzi coming up to me, but now, everyone’s a paparazzi. It gets annoying, so I like to show up right when the show’s about to start. 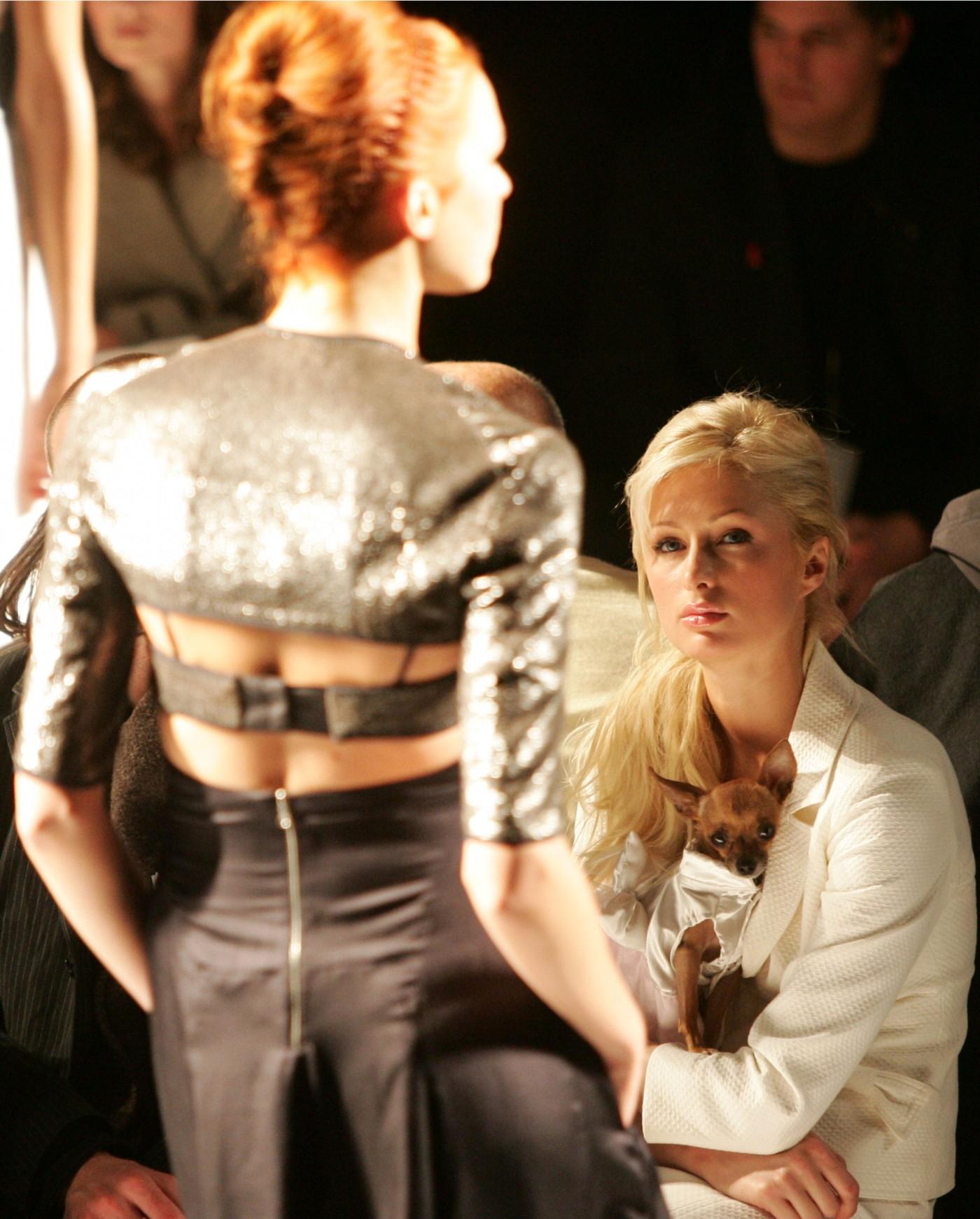 I’m so happy to be in the most incredible relationship. I can’t wait to start this next phase of my life and to have a family. I’m going to continue being a businesswoman and expanding my empire around the world. I have 19 product lines! I’m releasing my 24th perfume; I have a skincare line, a lingerie line, real estate properties, hotels, and more. I’m taking things to the next level, and I’m proud of what I’ve accomplished. But I’m not going to travel as much. I travel 250 days a year, so I want to be home more in Los Angeles. I love what I do, and am excited for my next album and my new TV show—it’s a docuseries airing on Vice.

Our condolences on the loss of Tinkerbell.

She was 14 years old—she lived a long, healthy, and happy life. She was an icon, and my BFF.

You recently got engaged—how did Chris [Zylka] propose?

We were having lunch in Aspen, and he got down on one knee. I had a feeling he was going to ask, because he asked my dad if he could marry me a few days before Christmas, so I knew it was coming. It was so romantic to be up in the snowy mountains with the love of my life. The ring was so gorgeous and sparkly—I almost had a heart attack! 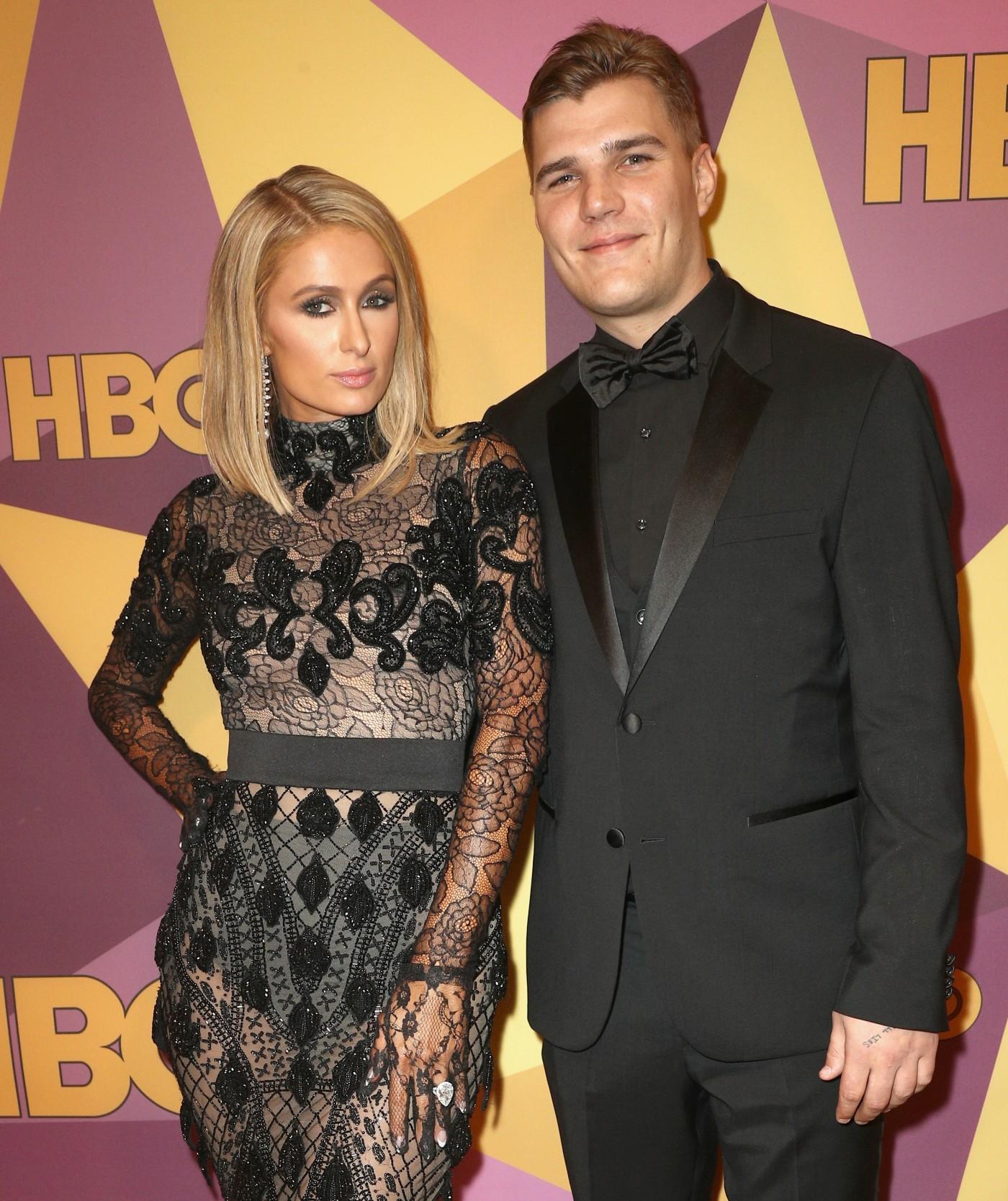 We just did a short film together that we produced. He’s writing a TV show, and he might get into directing, depending on his schedule. He’s also an incredible artist. Ever since he’s shown at Art Basel, people love his work all around the world. He’s such a brilliant, talented mind in every way. I’m so proud of him. It blows my mind when I see the art he paints for me.

What kind of wedding planner do you think you’ll be?

It’s going to take a lot of planning, so I’ll need to find an amazing wedding planner. We’re deciding if we want to do it in L.A., which is home, or some tropical destination. I might do two or more…
I don’t know! But we definitely want to do it soon.

Have you thought about wedding dress designers yet?

I’ve gotten so many calls and sketches from designers. I really want to get something special, unique, and different. I have to look through the whole list and see who’s the best. I loved my sister’s Valentino gown—she looked like a princess.

Looking back, what would you have told your 21-year-old self?

I wish I had known everything I know now back then. I’m obviously a lot wiser and more mature. [Laughs] I’d tell myself to not be too naïve and not let certain people in my life because you don’t always know what their intentions are.

Do you still say your trademark, “That’s hot?”

Yes! [Laughs] Every day, all the time, and I think I always will for the rest of my life.

I ran into Paris a few times in her wilder days in LA. She kidded me about being smaller, skinner than her. She beat me at arm wrestling a few times and loved picking me up on her shoulder and carrying me around!

Good God, Paris has more muscle in her one calf muscle than I have in my entire body! No wonder she can pick me up and laughingly carry me around!