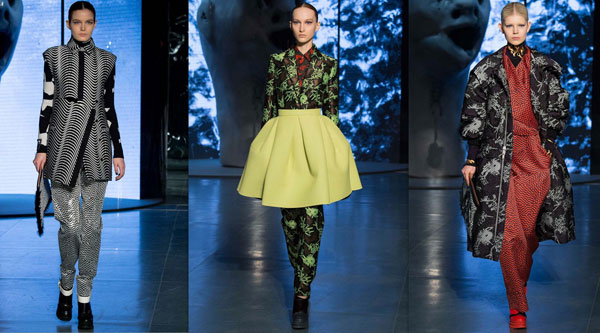 (NEW YORK) Kenzo
Carol Lim and Humberto Leon have been fixated on the work of David Lynch. So much so that the director created a large sculpture of a head howling above the photographer’s pit and took control of the soundtrack for this season’s show. The result? A positively fixating mishmash of trippy prints, weirdly wonderful styling combos like a lime green tulip cocktail skirt worn over a lime green, brown, and black jacquard print pantsuit with a red printed jacquard button-down or a zigzag printed red jumpsuit worn over a black turtleneck with golden tools printed on the collar. That’s right: the kind of tools one can procure at Home Depot. Tools happen to be a Lynchian archetype, which runs through all of his surrealistic works. Those came on nearly every print in the collection, and even snaked along in a cluster on a B&W zigzag print clutch with fur trim. Like Lynch’s films, it was a collection so cool and with just the right dose of weird that it worked wickedly well.

Comme des Garçons
How does the concept of a monster translate to the catwalk? In Rei Kawakubo’s hands, it equates to cartoonishly oversized suit jackets and oversized, gnarly knits. Massive, stuffed separates felt like textile-laden avant garde art installations tethered to the mods’ bodies. Knits in cream, black, and shades of grey were puffy, padded, and piled on the body in knotty, braided, or interwoven fashions. Tentacle-like extra sleeves smothered the torso on one navy and black number, and dangled like lost limbs of teddy bears in shades of cream and oatmeal on another getup. The 3-D add-ons obscured vision and shrouded faces on a couple of black-on-black looks. Besides the exaggeratedly large blazers in the first couple of looks, the closing look’s supershort, splayed-out charcoal tutu was the only other bit of strong structure in the collection’s otherwise nubby, murky numbers. Exploring Kawakubo’s interpretation of monsters is apparently about questioning beauty standards. While fascinating, there’s something distinctly not traditionally beautiful about this slew of 22 looks. In Kawakubo’s world, we’d have to assume this is a mission accomplished, non?

Yohji Yamamoto
A lot of designers have been thinking about the frigid temps by giving us plenty of layered, heavy knits should another polar vortex hit next winter, but leave it to Yohji Yamamoto to go a completely different direction. It was all about interpretations of the puffer jacket on this catwalk. That meant oversized puffy black capes, ponchos, and overcoats. Later in the show, variations on this style came in wild and colorful prints like a floral and chain print that will likely be a hit with Yamamoto’s clients. A pale pink poncho sported an Asian-inspired print of monsters fighting each other. Then there was the last look: a black pullover poncho with an image of a newborn baby, complete with umbilical cord, floating amidst imagery of hospital heart monitors, sperm, and butterflies. We’re not sure who will buy the latter. Or what kind of woman will want to don the few black looks that came with giant built-in bumps, sometimes on the hip and sometimes right in front in the nether regions, that looked like birth defects or overgrown tumors. Those may have been pushing it, even by artistic measures. But when some of these looks are (hopefully) toned down for the commercial rack, there will be plenty of Yamamoto-ites that will be first in line.

Maison Martin Margiela
For Fall, Maison Martin Margiela offered up a series of romantic looks that had a decidedly soft feel to them. Take look one— a lace shell layered over a striped silk tank, with one sleeve casually slipping off the shoulder, a leather bow at the waist, and a loose pair of plaid pants. Small, quirky details, like frothy messes of layers and iridescent clutches chained to pants, set the collection apart from more prepped-up looks. To wit: A blue and white fair isle sweater is total Ralph Lauren look, save for a leather dickey peeking out of the neckline, while a strapless navy dress with an intricate shirred detail had a classic feel, except for the fact that it was layered over a striped tank and floor-sweeping pants. There was an artful touch to the layering tactics, the accessories remained bright and vibrant, and the vibe was as nonchalantly chic as ever.