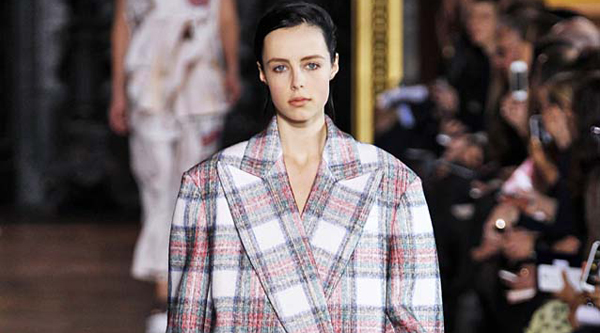 (PARIS) Stella McCartney
Stella McCartney‘s oeuvre received a jolt of the ’90s today at the 19th century Palais Garnier opera house, where Jessica Alba, Dhani Harrison, Marianne Faithfull, and Nicole Richie took their seats front row. The designer’s Savile Row-style suiting showed up most prominently this season in oversized navy pin-striped blazer-dresses worn with tailored, striped ankle trousers and chunky-soled chaussures. Later, the stripes took on relaxed, calf-skimming dresses, sweaters paired with kicky wool skirts, and cartoon-y printed silk separates. As for McCartney’s other calling card, her lace-edged slip dresses, those came pieced together—some with a turtleneck tops mashed with lacy bottoms, others with a casual polo top sewn together with a lacy, fishtail skirt. Per usual, a bevy of covetable, oversized coats (this season in neon plum and blown-out checks) rounded out her Fall assortment, underscoring that iconic masculine-feminine dance that McCartney has come to master.