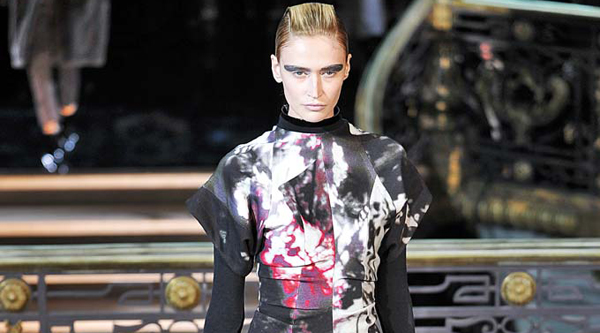 (PARIS) John Galliano
Alpha females, take note: Bill Gaytten seems to have whipped up your next uniform. The maison hosting Gaytten’s severe study of structured, ominously dark getups seems a bit discordant, sure, but out with the old and in with the new, non? Restrictive ruched swaths of noir in the form of sack-like calf-length frocks alternated with cigarette tapered skinnies, either in the same somber hues or, occasionally, quiet  pops of teal. The more dominant, memorable trou option, though, went for more rather than less: a particularly wide-legged calf-grazer, slightly theatrical in scale but reasonably wearable in both the dark staples and minimalistic washes of pattern. A brief story of pomegranate-spritzed cerulean lightened things up for a moment, evoking a bit of paint splattering in the process. As the latter quarter of Gaytten’s collections trotted out, the pants-heavy silhouetting segued to skirts constructed of vampy, gauzily sheer pleating, grazing the floor, followed by a finale series of gowns in horizontally draped columns of plum and (shocker!) more noir. The chapeaus and exceptionally severe charcoal brow treatments we could’ve done without, but for the unsentimental and harder-edged out there, Gaytten’s Galliano-branded latest had a smattering of pieces ready to be integrated into a sharp, no-B.S. femme’s arsenal of ensembles.

Vivienne Westwood
Medieval madness! Westwood’s latest spate of fantastical looks was a bit bipolar in feel, but one comes to expect hairpin sartorial twists and turns when it comes to the designer’s collective. Roughly half of the collection involved color and texture saturated hodgepodges, whether in forest nymph-esque mix of oat and russet-hued knits, choppy-hemmed capes, and fascinating mashups of flora and metallics, the latter rather liquid in appearance. Just a handful of looks in, however, the aesthetic drastically shifted to tightly-tailored all-white ensembles, wasp-waisted and collared, plus grey skirt suiting and LBDs that hugged the curves and added a few more in the shoulder region. Westwood kept the juxtaposition going through the final trio of looks. Case in point: a massive profusion of ostrich plumes cascaded over the shoulders to the ground in an all-black ensemble, followed by an ethereal, transparent wrapped-dress number in nude, closing with a perversion of the bridal dress, slit up the thighs, paired with knee-high black platformed boots, and an overly opaque veil all but obscuring the visage. Ever one to keep us on our toes, that Vivienne.