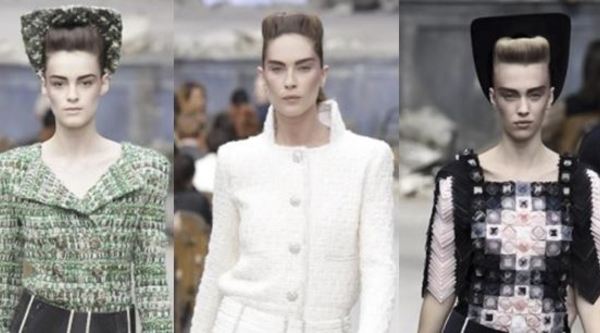 (PARIS) Chanel Couture
Karl Lagerfeld has never been one to shy away from drama, and staging his Fall 2013 couture show amidst some faux ruins in Paris’s Grand Palais was no ironic coincidence. In a mix of tweed and glitter, nearly each look in the collection was accessorized with extremely wide belts and modestly-heeled, buttery suede boots. Frocks done in heavy silks jetted to the space age via sharp shapes, precise seams, and glimmering panels. A plethora of extravagant dresses spilled onto the catwalk, one after another, featuring intricate hand-sewn detailing and unexpected constructions, creatively par for the course when it comes to the Kaiser. Skirts over dresses, poufs of tulle and touches of mosaics made cameos. The Kaiser paired David Bowie-esque bouffant hairdos with tweed caps that can only be described as the love child between a bonnet and a cowboy hat.

Half the fun of the Chanel show is seeing which darlings grace the front row, and which Chanel classics they’ve decked themselves out in. Rhianna showed up, with pearls covering more of her body than her long cardigan did, while Miroslava Duma matched a teeny pair of jean shorts with a tweedy blazer (in a chic manner that only she could get away with). Kristen Stewart donned a short sleeved blazer featuring shoulder padding, sans pants, looking a tad uncomfortable. Other front row darlings included Natalia Vodianova, Alexa Chung, Milla Jovovich, Rose Byrne, and Julia Restoin Roitfeld.

Chanel Sets A Date For Its Cruise...