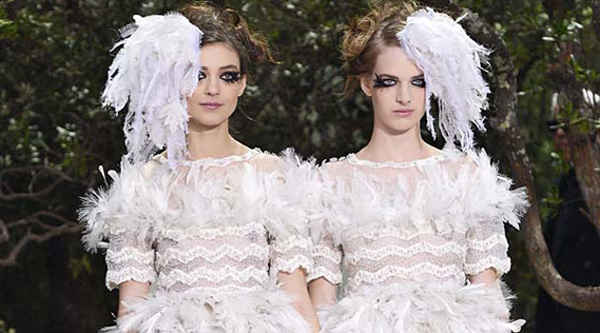 (PARIS) Chanel
More than just the latest forest-inflected Couture show, with plenty of florals flourishing down the runway at Chanel: Karl always has a trick up his sleeve, of course! While the collection underscored some themes other couturiers have been pushing this season, Karl’s idea of romance is a tad darker than his counterparts’. Also of note: the strong emphasis on the shoulders, with collars to contemplate. Birdsong followed the models, nymphlike as they wound through a set of oak and pine trees that had been imported into the venue in a sort of Shakespearean dream. The show kicked off with Stella Tennant in a white knit jacket bearing accents that lent the effect of an off-the-shoulder look. The framed shoulder gave off an Elizabethan air with a modern take (see: a lavender skirt suit, or a blush pink knee-length shift dress accompanied by feather plumes in the coif). Feathers also played into the dark black eye makeup, extended as wispy lines for a touch of dark romance, which played nicely with the shimmery white knits, but also played into the darker pieces. Gothic garden party, anyone? Karl’s florals took shape in black or navy, painstakingly embroidered onto white skirt suits or as white trimming contrasting with fluid black, sequin-dappled gowns (not a cinched waist to be seen here). The show closed with feathery white empire-waist dresses worn down the aisle, hand in hand—about which there has since been, as Karl might say, much ado about nothing.

Akris Arrives in the Big Apple