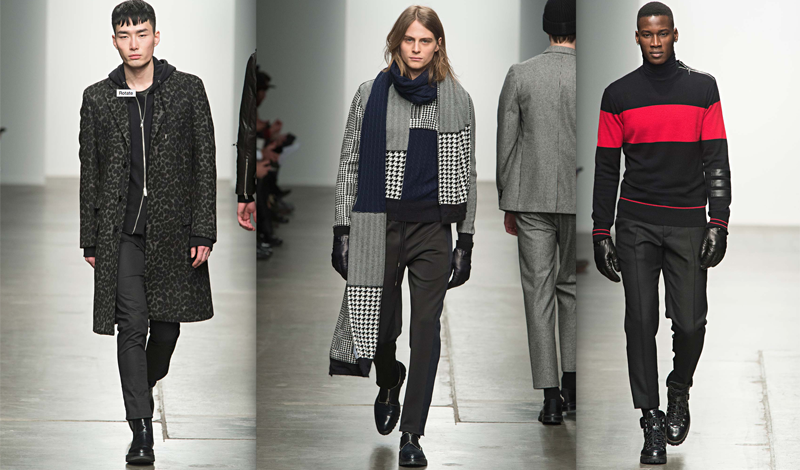 Brothers Shimon and Ariel Ovadia are the new heroes of menswear and their stellar show at Pier 59 proved why editors and customers alike have decided they are (still) the next big new thing. The show opened with a black, white and grey palate. Turtlenecks were worn under button-down shirts, houndstooth came in large and small checks, and the Ovaidas showed this menswear staple in black/white and red/black combinations. A grey shearling jacket was a winner, as was a camel shearling bomber jacket. There was a slouchy smartness to suits, where pants featured drawstrings but never felt sloppy, the way jogger-ish, actual sweatpants (the trend that won’t die!) looks in countless menswear spreads. Pajama-like shirts were worn under suits–perfect for the next young, hip Hugh Hefner. A sweatshirt announced “SKI” across the chest, and a red and black racing sweater was both sleek and sporty. The downhill daredevil theme reappeared on a B&W tweed slim suit as a black racing stripe ran from the neck, stopping halfway down the back.  The shoes were as strong as the clothes, especially croc brogues in that clunky-cool shape that Thom Browne made popular a few seasons ago. There was great denim (the Ovadia brothers are tailors at heart, and they can thus cut a mean suit and pant) and a black and grey leopard topcoat had Mark Ronson’s name written all over it (in leopard spots, of course).

The Scoop On Today’s Issue Of The Daily: SJP, Spring Studios, The Lucky Group, And More!