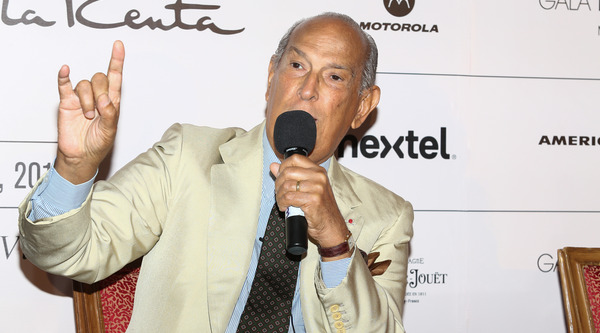 (MEXICO CITY)  Oscar de la Renta took to Mexico City late last week for a lavish gala thrown as part of Nextel’s ongoing series of catwalk and shindig extravaganzas. It wasn’t de la Renta’s first time on the south of the border party circuit: the designer was in Mexico City circa 2011 for another Nextel event in his honor. The city’s affinity for de la Renta certainly isn’t a one-way street—apparently, the dignified and dapper designer’s interest was piqued many years prior. “A long time ago, I lost my heart in Mexico and I am very happy to be here again,” de la Renta exclaimed during a press conference at the Four Seasons (the designer’s home away from home for his Mexico City jag).

Also on the topic docket for de la Renta’s press conference: a less than chummy rapport with Michelle Obama, and a more rewarding, if tricky, one with John Galliano.

As for the First Lady: “It is a relation[ship] that began poorly, and I think it will end the same way.” If not FLOTUS, who’s the lass du inspiration, then? Average Janes in lieu of famous folks, according to de la Renta. “An anonymous woman on the street is the woman who influences fashion today, not a movie star or a first lady.”

On Galliano’s stint in the storied designer’s atelier? “It’s always important to have someone to give you a friendly challenge—that’s something that I had with John,” de la Renta said.

Aficionados of all things de la Renta are apparently quite precise in their sartorial desires. “I’m dealing with a consumer who knows exactly what they want and knows where they are going,” the designer said. Also, he may have lived eight generations, but certainly don’t expect him to slow down anytime soon. “I am a very restless person, I am always doing something. The creative process never stops…this is the most exciting moment in fashion: women control their own destiny, clients are growing more demanding and all of this urges me to be better every passing day.” Go, Oscar, go!

At the decidedly supper-apropos hour of 9 p.m. (meaning, as do most things both in Mexico City and New York City, but even more enthusiastically in the former, the revelry didn’t end up transpiring for a solid hour or two after the supposed start time), the black tie donning fashionette crowd took to Colegio de las Vizcainas, a still-operational public elementary school dating back centuries, gussied up for the occasion with a massive tent over the fountain-festooned courtyard, dramatically lit and dripping in flora. On the bubbly front, Perrier Jouet was poured very freely; nibbles included a smoked salmon and arugula salad with caviar-studded dressing, roast beef, and a rich avocado-filled take on tortilla soup. As for the runway piece of the chic puzzle, at midnight a lengthy parade of de la Renta confections (mostly Spring ’13, with some pre-Fall in the mix as well) took to an undulating, shiny white runway that wove through the crop of tables.

After a solid 45 minutes of runway-ing, the show was still far from over: one of de la Renta’s favorite crooners, Italian tenor Vittorio Grigolo, took to the stage (backlit with a giant neon scrawl of the designer’s signature) to sing so passionately he had two almost-wardrobe-malfunctions of the trou variety, until nearly 2 a.m. The man of the evening sat positively enrapt for the whole set, and his evident pleasure (the swoon factor, perhaps) continued as the opulent eve devoted to de la Renta wound down with a mariachi set. Just trust, the man loves his mariachi…
ALEXANDRA ILYASHOV

Things To Discuss: Ke$ha Gets Her Gaga On

Get To Know Model Malaika Firth