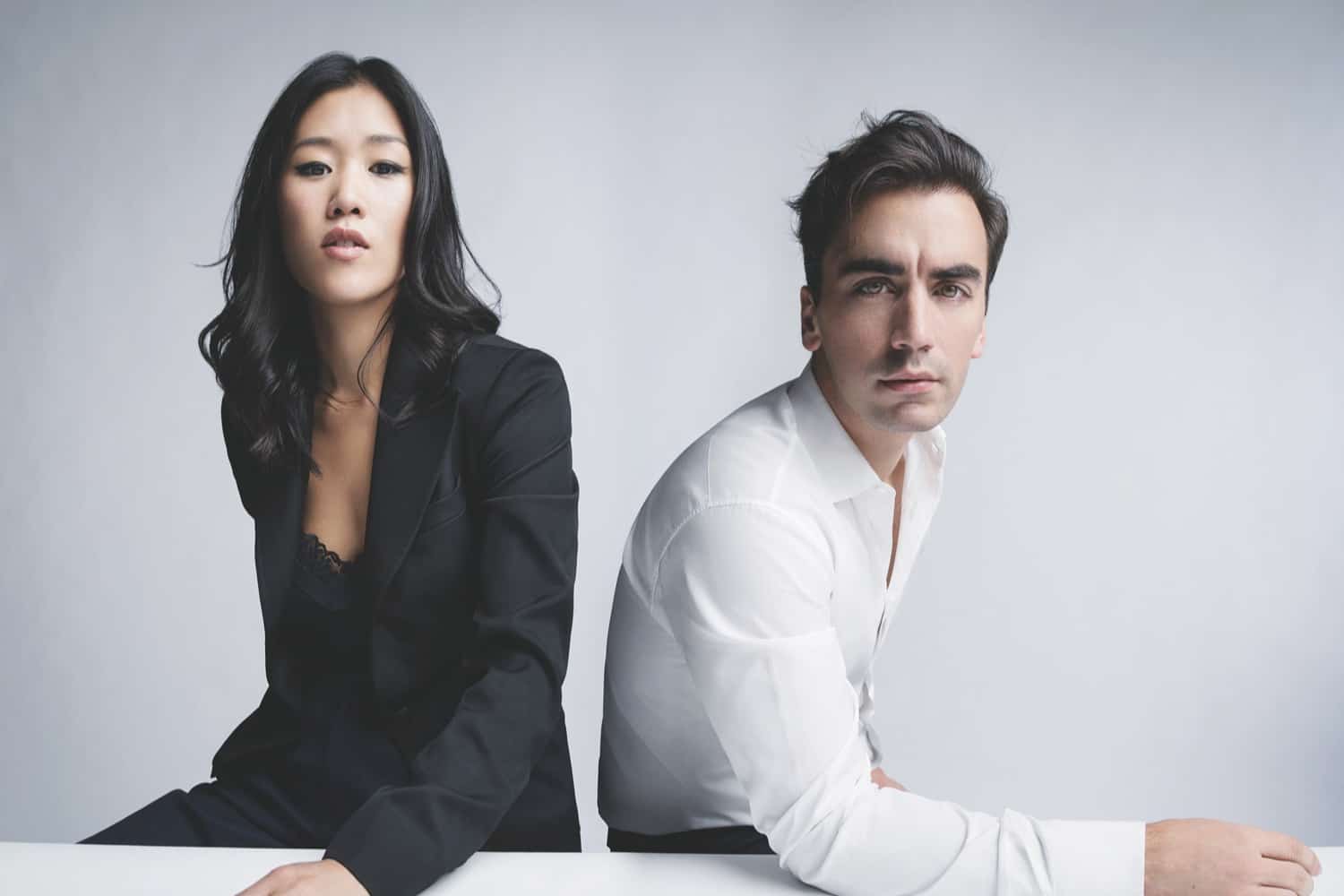 Most designers had to show their Fall 2021 collections digitally this past season, which made standing out harder than ever. On the other hand, Oscar de la Renta’s LAURA KIM and FERNANDO GARCIA created a sensation. First, they released an image of Candice Swanepoel in an embroidered flower dress that became the house’s most popular Instagram post ever; then, superstar Taylor Swift showed up wearing it to the Grammy Awards a few weeks later. The designers tell us how they managed to create the first major fashion moment of the year!

How did the dress come together?

Fernando Garcia: We tend to have a show piece, something that’s aesthetically stunning that we understand is probably going to be for marketing purposes or a red carpet moment. But they are buying this dress. The thing is when there’s something that clients fall in love with, there’s very little price resistance. It has to be incredibly beautiful. It’s not like we can do that all the time. We don’t sell $9,000 cocktail dresses every day.

Laura Kim: The day the collection images went up, we got a lot of private clients calling in to reserve the dress. Sometimes stores don’t pick up dresses that are that expensive.

How was it created?
Garcia: We collaborated with [artist] Tricia Paoluccio [of Modern Pressed Flower] on the pressed flowers. During lockdown, we wanted to see if we could work with Tricia on the pressed flowers because the ones we were working with weren’t working. Eventually, we figured out a way to figure out a whole concept, which is perfect for this collection. It’s end-ofsummer vibes timed with the summer arrival of the collection in stores.
Kim: Tricia went to her family farm in April [during lockdown] and she pressed all these flowers for three months while there. We tried to press it ourselves, but it was a disaster! We started doing pressed flowers because we wanted it to be memories from the spring. At Oscar, we always do a floral because that’s the DNA of the brand.

Taylor Swift also wore the dress to the Grammys!
Garcia: When [Swift’s stylist] Joseph Cassell Falconer spoke to us about this moment a while ago, it was clear that we needed to collaborate on something reflective of Taylor’s new mature voice. I told him “Exile” was the only song I’ve been listening to. Music is perennial to any design process, and that song was as much part of this dress as all the work our team did for it.

We love the image of Candice Swanepoel that was released with the rest of the collection.
Garcia: We’ve worked with her before. Our approach is to collaborate with people who understand the brand, like us, and have similar personalities to Laura and me. We just connected with her in a lot of different ways. It’s important for that relationship to show through in the images we’re making.

What was the concept for the shoot?
Garcia: I thought it was important to have something that would balance the joyfulness of the clothes with a sterile background. It allowed for all the focus of the color to permeate. 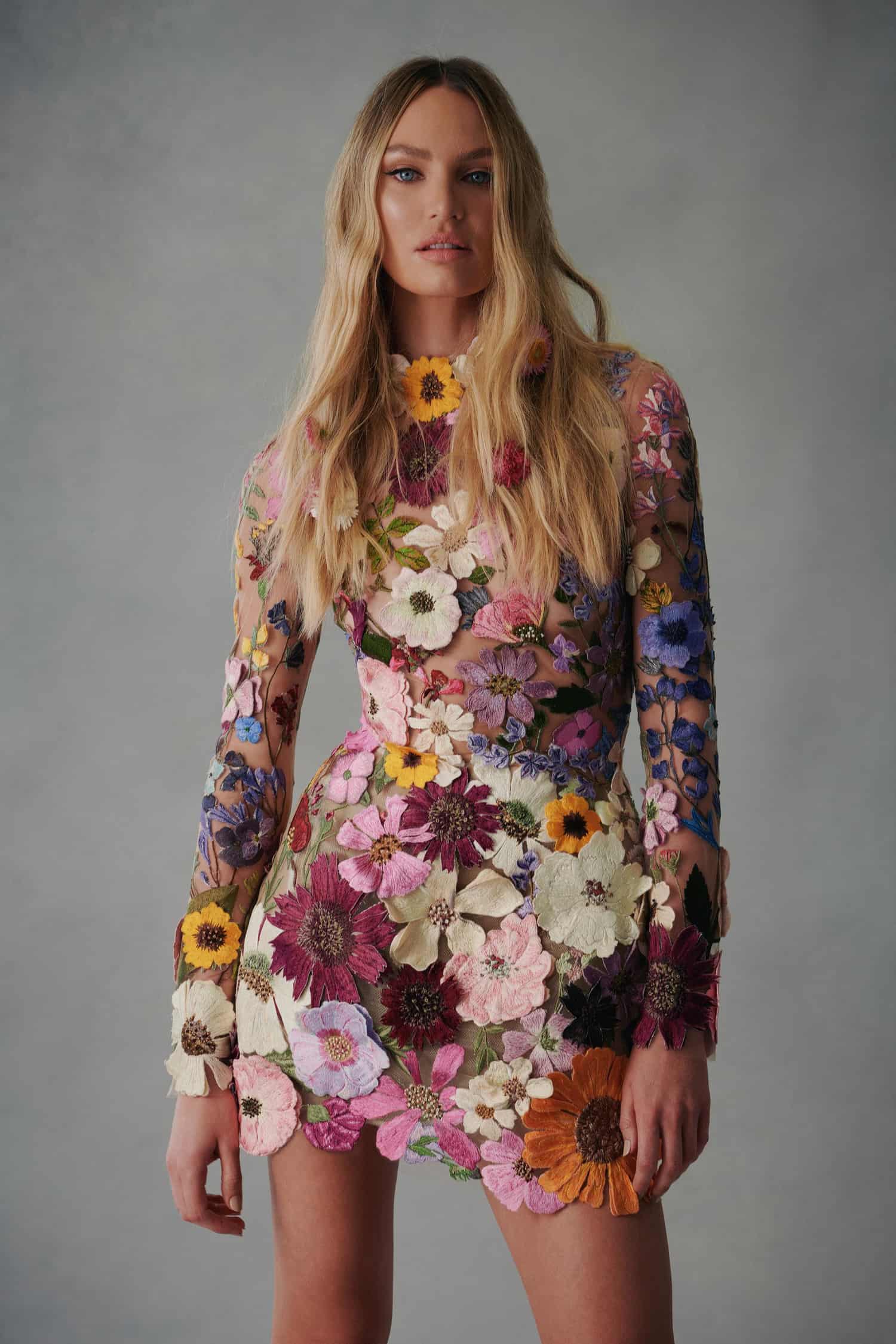 You released your Fall collection a tad later than normal.
Garcia: We weren’t totally on time, and because we didn’t have the show, it wasn’t a big deal to move the market appointments that were virtual a couple of weeks. We were happy to do that because we could have a perfectly realized collection and not just throw down the runway whatever arrived on time. There are so many delays given the situation the world is in right now.
Kim: The snowstorms froze all the international shipments. The shipments from Italy and China go through Memphis, and they lost power for almost 10 days, so all our packages were stuck there for 10 days.

That wouldn’t have been fun if you had a show.
Kim: Oh, my God! I would have had a panic attack!

You have a fragrance, Alibi, that just came out. What’s the process been like getting your hands into a very different world
Kim: So many meetings!
Garcia: We met quarterly to discuss what our vision was for our first fragrance. We wanted to make sure it had enough of us in it. It’s very similar to us and very sexy, which is a bit of a departure for the house in a good way. It’s time to embrace the new side of the Oscar woman.
Kim: The world evolves, and Oscar always told us to evolve with it. 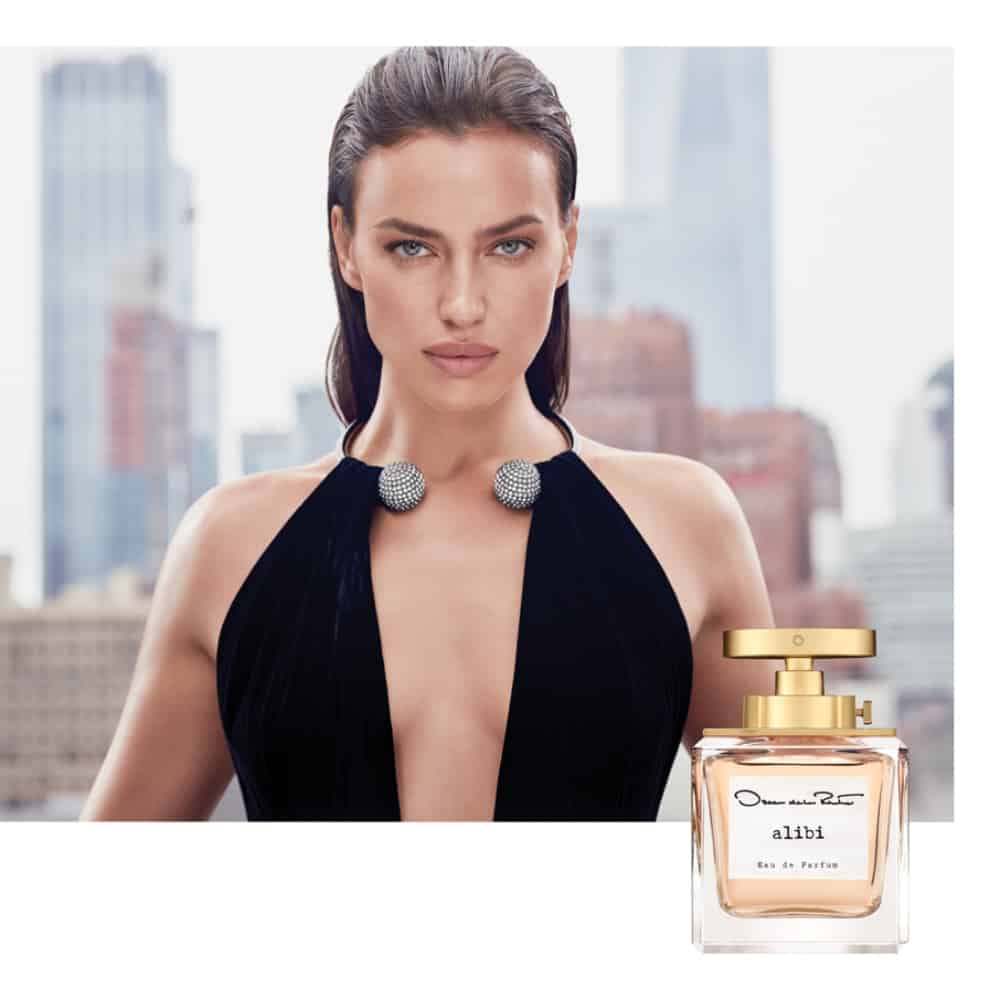 You dressed Amanda Seyfried for the Golden Globes. It’s been a minute since you were able to do red carpet looks. How did that come about?
Garcia: I missed that so much and had so much fun doing that. I love the film industry and follow it. The moment I heard that Amanda was in Mank, I immediately texted [her stylist] Elizabeth Stewart and said, “This is going to be a great ride for her. She’s going to get a lot of nominations. You know who to call when that happens.” I texted Elizabeth the morning she was nominated, and Laura and I sent sketches 10 minutes later. Amanda is lovely.

What’s new with Monse?
Garcia: A TV show that’s coming out in May with kids in high school that I won’t name has shown interest in having pieces on the show. That will be major! What else are you up to this spring? Garcia: We have bridal for Oscar coming up, and then maybe a Miami weekend!
Kim: I haven’t flown since last March.
Garcia: I went to L.A. once to see Meghan Markle for something that’s coming out. It’s been cooking for a bit. She’s a big supporter, so it was worth the trip. My goodness. All this attention that has been going on with her.

Did you watch the Oprah interview?
Garcia: We were texting. She feels great! I’m proud of her.

Once things get back to “normal,” what are you looking forward to?
Garcia: What I miss about the shows is there is a level of pressure on Laura and me to deliver a more stellar collection, because as soon as they are done, you get to have all these peers come to see you backstage, like Edward Enninful and Nina Garcia. You get to see their faces. They’ve seen so much that if you don’t wow them or shock them or impress them, it’s on you. That’s an energy I miss. It pushes us to be even more creative. Hopefully by September we get to do shows again and have that same feeling—the adrenaline rush that we thrive on.

You definitely gave us a great moment this season with the embroidered flower dress!
Kim: Thank you!
Garcia: It’s the power of a great model, a great photographer, and a very pretty dress.

How To Achieve Your Tight Business Schedule And Hollywood Body At The Same: Eric Janicki Shows How