One More Gatsby Screening For The Road 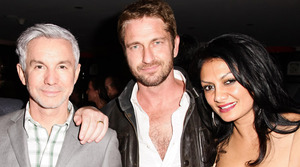 (New York) Another Gatsby screening? Consider us there. Baz Luhrmann‘s much-anticipated The Great Gatsby finally opens on Friday, but before the curtain comes up, The Cinema Society with Brooks Brothers and Town & Country held a private screening on Tuesday night. The epic film, already receiving raves, is an adaptation of F. Scott Fitzgerald’s great American novel. A plot refresher: A Midwestern war vet (Tobey Maguire) is drawn to the past and decadent lifestyle of charming neighbor, Jay Gatsby (Leonardo DiCaprio) who was deeply in love (understatement) with his cousin Daisy (Carey Mulligan). It’s hard to dispute one of the great literary tales, but Catherine Martin‘s costumes thicken the plot and are a feast for the eyes.

After the film, Luhrmann “fielded” questions from Town & Country EIC Jay Fielden giving major credit to Brooks Brothers for creating the men’s looks and reminding us that Fitzgerald was a fan of the label. The director also revealed that Fitzgerald’s granddaughter recently caught a screening and gave the family’s blessing, much to Luhrmann’s relief. After the Q&A, guests including late arrival Zachary Quinto (back to his normal hair color after going blue punk for the Met Ball) headed off to the nearby The Lambs Club for Caliche Rum “Gatsby” Daiquiris and cocktails named The Zelda. It was a night that even Gatsby would have envied.