Olympic Runner and Gold Medalist Sanya Richards-Ross on Working Out, Her New Book, and More! 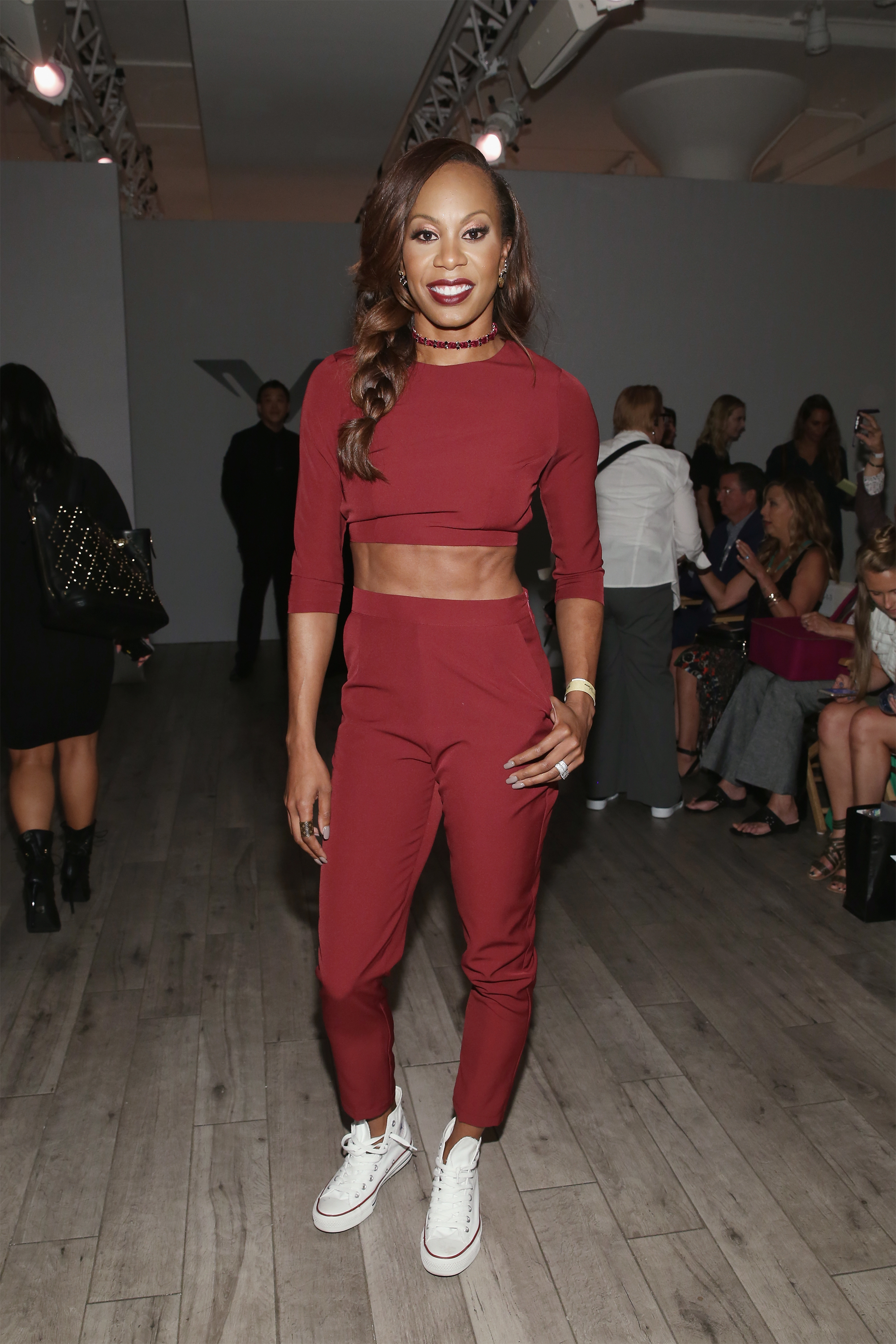 Olympic runner and gold medalist Sanya Richards-Ross retired from track and field last year and is expecting a baby, but that’s not to say she isn’t maintaining her sculpted bod. We caught up with the sports star about her new projects, like a book and potential TV spot, and her workout routine. Take notes…Memorial Day Weekend is fast-approaching, after all!

EUGENE, OR – JULY 01: Sanya Richards-Ross reacts after failing to finish in the first round of the Women’s 400 Meter Dash during the 2016 U.S. Olympic Track & Field Team Trials at Hayward Field on July 1, 2016 in Eugene, Oregon. (Photo by Patrick Smith/Getty Images)

EUGENE, OR – JULY 01: Sanya Richards-Ross reacts after failing to finish in the first round of the Women’s 400 Meter Dash during the 2016 U.S. Olympic Track & Field Team Trials at Hayward Field on July 1, 2016 in Eugene, Oregon. (Photo by Andy Lyons/Getty Images)

Congrats on your baby news! Is working out harder these days?
In the first trimester it was tough! I was so tired that I couldn’t get motivated to start moving. But the minute I was out of my first trimester I started to feel like my old self again. I now train with my mom and brother-in-law— you would think my mom was training for the Olympics. I’m like, “Mom, relax, slow it down!” I do about 30 minutes of cardio and then I do weight training. I’m not doing as many core exercises as I was before. I also used to do a lot of Pilates and yoga, which I want to start incorporating again. I think the yoga will help with delivery!

Your husband Aaron Ross is a football star. Would you both be disappointed if your son isn’t athletic?
The University of Texas already offered him a full scholarship, but I keep thinking, what if our son’s not athletic? Of course I won’t be disappointed, but I think it would be a little strange with the genes he’s getting if he doesn’t have a some athletic skills [Laughs]. My husband and I already talked about it; we’re not even going to force him into sports. He’ll find that on his own. Both of us had that luxury—my dad was a great soccer player, my mom was a great track athlete, and I had no idea I was interested in it until I got much older. Hopefully we can be the same for him, and if he chooses sports we’ll guide him and support him. 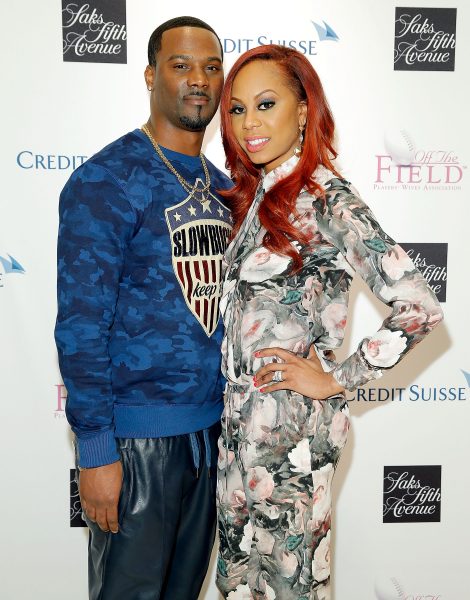 You’ve tapped into so many markets: a hair extension line, a reality show, and more. What do your fashion endeavors look like?
I love fashion, and I’ve had the tremendous opportunity to do some great stuff with Nike. They have their NikeLab line, which, to me, is the closest they’ve come to stepping outside of the sportswear arena and merging into fashion. I did a campaign with Riccardo Tisci, which was mind-blowing. He’s just a phenomenal guy. I also launched a faux fur line about a year ago. When I was competing, I always said, “Look good, feel good, run good,” so I think fashion definitely has a way of uplifting people. It’s a way of expressing yourself and just feeling beautiful and attacking the day.

A lot of models are fronting athletic brands. What’s your take on that?
I have mixed feelings about it. I think that sports and athletics are for everyone, so I don’t think it always has to be represented by athletes. It’s great to see beautiful people or models wearing these brands because it opens it up to people who aren’t hardcore athletes. With NikeLab and all the extensions that they’ve been doing, a lot of the pieces can be worn from the gym to wherever you’re going.

What’s your go-to shoe when you’re not in your running sneakers?
I love a simple sandal. I love Louboutins—the heels are a little bit high for me. Stuart Weitzman makes great ones too. I’m kind of a denim girl who will pair jeans with a wonderful blouse and and a high-heel sandal, if I’m not in sneakers, of course!

How do you describe your personal style?
I definitely love trends, and I take risks. Sometimes I like to be like bohemian and wear a head wrap with big earrings, but I also love and am not afraid to try new looks, like wearing bell bottoms.

Many Olympic athletes have competed on Dancing with the Stars the past few seasons. Have you considered going on the show?
I would definitely consider it. It’s a great opportunity for people to see our personalities outside of the few minutes that we’re on camera during competitions. I know Simone Biles. I feel like she’s probably going to win! She’s just too good. Gymnasts are used to dancing, so it gives them a little bit of an advantage.

You retired from running after the 2016 Olympics. Was there anything that you could eat when you were running that you can’t eat now?
I’ve always had a very boring diet. My parents don’t eat red meat and pork, so I never ate that when I was growing up. I eat a lot of grilled fish or chicken, and lots of salads. I choose my fruits and vegetables. The only thing I’ve cut out is protein shakes. When I was burning so many calories, I’d drink two of them a day. If I drank them now, it’d probably put a little bit of weight on me.

You’re also working with Technogym as a spokesperson for the company.
I’ve used their products for almost two years, and it is the best. I have the bike, skillmill, and treadmill at home. To be able to get a full body workout in and track everything that I’m doing allows me and husband to be competitive but have fun. We’re always trying to beat what we did before!

Tell us about your new book, Chasing Grace: What the Quarter Mile Has Taught Me about God and Life.
It comes out June 6, and it’s about the 400, which is one of the toughest races on the track. It takes a lot of heart and courage to run the race, and I learned a lot from the preparations for it—the mental development you need to run that race. The book is very raw and real. At the end of the day, I hope it’s an inspirational memoir that helps people at any age who want to achieve a goal.

What else is on your career bucket-list?
I started doing a little bit of commentary on NBC, so I would love to go into broadcast journalism. One of the people I’ve looked up to is Michael Strahan. He made that transition from an amazing sports hero to being on shows like Live with Kelly and Michael and Good Morning America, as well as ESPN. I would also love to do a little acting.