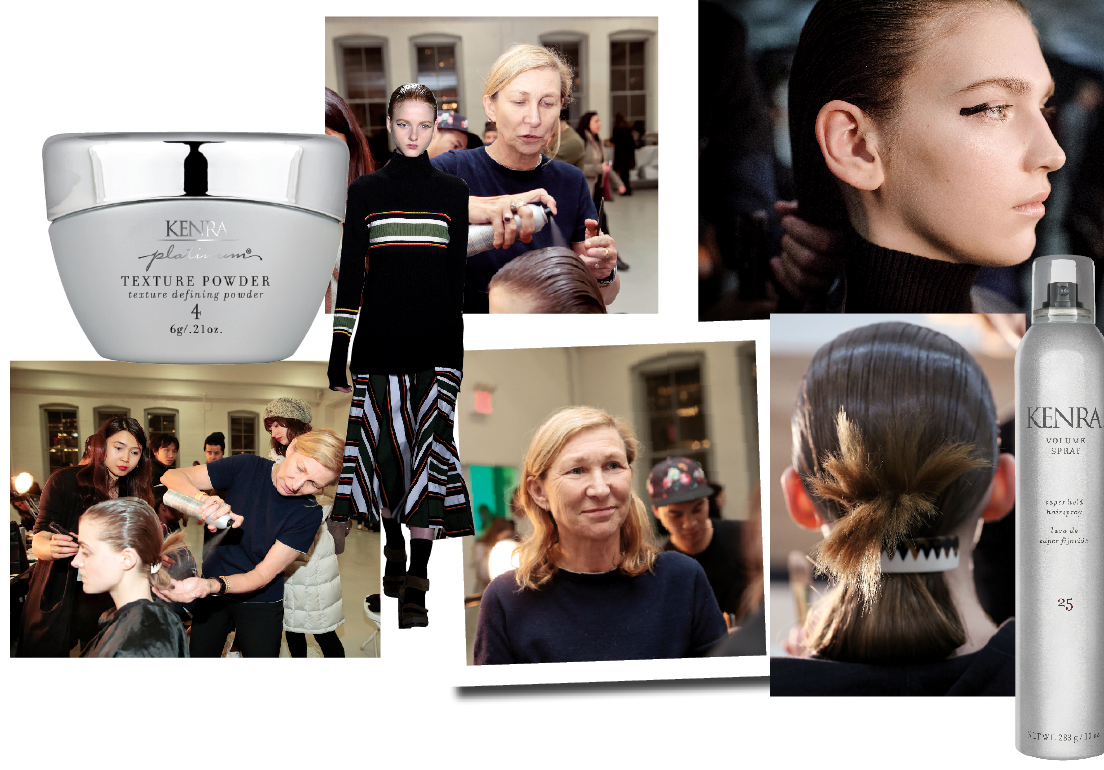 Legendary hairstylist Odile Gilbert has worked with every A-list photographer and fashion glossy  in the biz. We caught up with Gilbert backstage at Suno—where she dreamed up a slicked-back coif with the help of  Kenra Professional—to get the inside scoop on her storied career.

This is your first time working with Kenra Professional. What did you think of the product?
I love the products. They are quite luxurious. It’s a huge line.

How did you create the look?
First, we flat-ironed the hair and used the Kenra Hot Spray 20 to make it really, really flat. On models with curly hair, we used Kenra Platinum Blow Dry Spray to keep it protected. From there, we added the Kenra Volume Mousse 12 to slick back the hair. Then we combed it back with the Kenra Platinum Texturizing Taffy 13 for the shiny, almost wet look. We also have to keep it very straight in the back, so we used a little bit of the Kenra Platinum Working Spray 14. We blowed it dry to set the product, and then the hair was gathered back into a low ponytail. We took the pointed end of a brush to create the loop and then we fastened it with Suno barrettes. To really hold it all together, we used Kenra Volume Spray 25.

Could we re-create this look on our own?
Of course, but some people are more talented than others! I can always do the hair on someone else, but when I’m doing my own hair, it’s a different story.

Did you always know you wanted to be a hairstylist?
I wanted to travel! I wanted to be into the world of journalism, photography, and beauty. So I went to hair school, and from there, little by little, I began working on films and magazines.

What made you decide to move to New York from Paris in 1982?
Because everybody loves America, you know? I always wanted to be part of America. I wanted to speak English. It was always a dream!

What was your first job in New York?
A shoot with Polly Mellen and Arthur Elgort for Vogue.

Wow! How did that happen?
It happened right away, but I already had a book, because I had been working for magazines in France. I had an agent and everything in Paris as well as in New York.

Was it intimidating shooting with Vogue in New York for the first time?
Yes, of course!

What was Polly like?
A genius, you know. But it was not easy for me to understand her, because she spoke very fast, and my English wasn’t as good as it is now. But I was impressed and a bit scared, of course.

Are you surprised by how much New York has changed since you first arrived in the ’80s?
Yes, because I was living with François Nars in Soho. We moved to New York together, and in Soho, there was nothing there. There were no stores or fashion boutiques like there are now. It was really different. But there was a fabulous nightlife scene, because people like Andy Warhol were going out all the time. It was a more free-spirited time.

Which nightclubs were the hottest?
Area, Limelight…also, people at that time were a bit more eccentric. They were really dressing up to go out.

What would you wear?
We wore wigs, and we were always dressed in Stephen Sprouse. To get into a nightclub, you had to have a look.

Do you ever experiment with your own hair?
No, because I don’t have time. I’m always doing the shows, and working with models and actresses, but with me it’s very simple. When I work, I always put my hair back. When you are a hairstylist in fashion, you have to kind of forget about yourself!

How many shows are you doing in New York this season?
Seven: Suno, Jason Wu, Thakoon, Rodarte, The Row, Zac Posen, and Altuzarra.

Do you ever disagree with the designers on the direction?
No. The designer will always bring ideas about what they want, and share the story behind their collection. It’s very important to follow their idea, because it’s about their own work.

The first runway show you ever did was for John Galliano in 1994. What was that like?
The were about 50 models and 50 hairstylists, because he was the first one to do one look per model. But I had three weeks to prepare, so it helped.

Which designers give you the most creative freedom with the hair?
John Galliano, Jean Paul Gaultier, and Karl Lagerfeld.

How long have you known Karl?
About 25 years. I started working with him the season right after I did John Galliano, so it must have been 1995. He’s quite easy to work with, because he knows exactly what he wants. He does so many shows, and he’s very precise. It’s much easier to work with people who know exactly what they want.

What editorial piece are you the most proud of?
It’s more about the photographers I got to work with, like Peter Lindbergh, Steven Meisel, Paolo Roversi, and so on. The one I love to work with in America is Bruce Weber. He’s so nice. I’ve tried to work for all the best magazines, you know? Every shoot is different, but of course when you work with all the top models, it’s always a big memory.

Who has the best hair in the business?
Gisele and Linda Evangelista. But you know, if models don’t have good hair, we make it happen.

Which celebrities do you work with?
I take care of Marion Cotillard and Cate Blanchett, usually for the red carpet, and I’ve cut Tilda Swinton’s hair for six years. I also cut Sofia Coppola’s hair. I also worked on Sofia Coppola’s Marie Antoinette. I did Kirsten Dunst’s hair, specifically. She was heaven to work with.

Did you create wigs for the film?
No, those weren’t wigs! Those were just extensions.

What do you love to do when you are in New York?
I just love to get a pedicure and manicure. I’m not kidding! Because in Europe, we don’t have as many nail places as you have in America. I take care of myself.