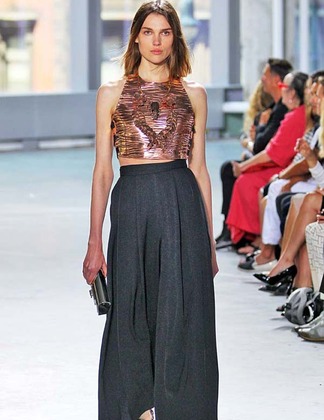 (NEW YORK) Proenza Schouler
Jack McCollough and Lazaro Hernandez are always doing interesting new things with fabrics, hence why they’re so often regarded as true craftsmen. Last season, the duo whipped up a tweed pattern from woven leather, and toyed around with heat-infused embroidery on laser-cut materials. So, what was up their sleeves this season? Pleats got lined with thin strips of silver and bronze foil, printed fabric looked like strips of paint, and a shaggy coat resembled fur—but was actually comprised of piles of silk strips. Other standouts from the collection included culotte pants, silver and bronze breastplates (that were, in fact, crop tops). As for that seemingly cracked B&W print on coats and dresses? It was, in fact, printed branches on silk crepe. Plus, those turn-key closure jackets are subtly unique enough that they’ll likely fly off the racks. What’s left to be desired? We can’t think of anything…

Reed Krakoff
Taking a slight step away from the completely sports-wear inspired sharp collection he showed last season, Reed Krakoff, softened his approach a bit this time around. Clear, creamy and fluid whites were the colors du jour, and came in the form of a perforated sweatshirt, an intriguing coat with a vest attached via a folded hem, and elongating skinny pants. A flash of metallic silver, in the form of a sleeveless trench. broke up the color palette. Sheer black with a touch of leather and acid green silk made cameos as well. As Krakoff is known as a bag man, he sent some stunners down the runway. An easy, boxy number in black crocodile, pale tan and snakeskin was grasped like a clutch, allowing its two straps to hang free. The collection of mostly unfussy pieces suggested a closet revamp, which would involve investing in a simple three quarter sleeved coat, a dressy silk bomber, a silk wrap skirt with a thigh-high slit and a heavy silk strapless evening dress with draping to die for.

J. Mendel
Getting away with fur in the spring can be a hard thing to do, but with the help of J. Mendel’s candy colored fur accents, we’ll give you full permission to rock the rather off-season trend. What else should you help yourself to, in unlimited quantities? A mash-up of prints on a tapered pair of white pants easily put together with a coordinating tee, a colorblock tank dress with a dropped and flared waist as well as a long sleeved tee-dress whose wide-knit top is twisted into a pleated pink skirt. While each look was carefully styled, this vast collection was quite like driving down a winding mountainous road: you never quite know what’s around the corner. Crop tops and skirts were followed by shockingly detailed evening gowns; a simple leather shift with lace detailing was tailed by a neon orange dress with a hint of a boost in the shoulder region. If there was any show that kept the audience guessing what would come next, J. Mendel takes the cake.

The Blonds
Leave it to David Blond and Phillipe Blond of The Blonds to put on the most fun and raucous fashion show all week. Everyone from Iggy Azalea to Amanda Lepore and Lady Bunny were there. The latter of which sashayed into the room and twirled for photographers. God bless whoever had to sit behind that gigantic wig! Meanwhile, the room was filled with other characters who had come dressed up in their most eye-catching get ups like a man in a black lace up rubber corset with a cape and a gigantic blond mohawk headdress and a woman in a black feather corset with black feather epaulets and a foot tall hat to match to a man whose entire face had been set with crystals. As for the show, Phillipe Blond made his usual big entrance, this time in a full on silver space costume, which he promptly threw off to reveal a gold jeweled long sleeve body suit (which took 3 months to make) and his trademark blonde hair and to die for legs. What followed were models in futuristic numbers like a Tweetie Bird corset (one of their fave blonds!) with a yellow feathered shrug to a turquoise sequined deep-v body suit with blue feather epaulets, which has already made its debut today (appropriately) on the cover of Britney Spears‘ new album, Work B**ch. It was all very Barbarella and indeed, Jan Arnold‘s Creative Nail Design took that them straight to the fingertips, recreating scenes from the famous flick onto actual nails and that was just one set of the awesome nails they sent down the runway. The Blonds know their customer well (the likes of Amanda Lepore, Britney, Katy Perry, Beyonce), entertainers in a word, but there were also plenty of wearable looks for those not hitting the stage like a B&W mini dress with geometric sequins that hung off the fabric, or an ultra cool white mini dress with what looked like white scales sewed on. Fab, fun statement pieces for celebs and fashion girls alike.