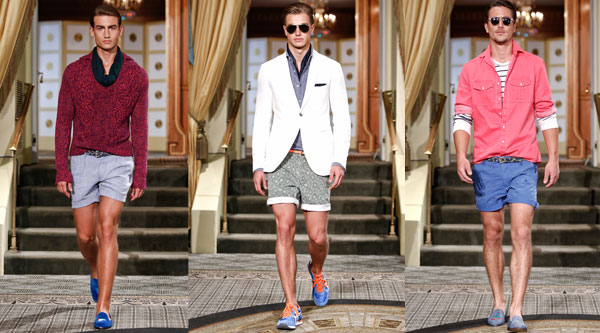 (NEW YORK) Michael Bastian
A study in contrasts of sorts, Michael Bastian’s spiffy take on laid-back dressing was shown amid the opulence of The Pierre. A circular runway, where models crisscrossed between rows of edtrices and well-dressed dudes, held crooner Alice Smith and a live pianist in its center. The inspiration was Bastian’s take on the French homme, “with a lot of humor and emotion,” which came through loud and clear in the collection’s plethora of patterns. While a double-breasted suit and straw boater were in the mix, so were pineapple, paperclip, and wine glass print. The marriage of fashion and whimsy were apparent in the multitude of leopard print, although Michael “considers it to be camouflage before I consider it to be leopard.”â€¨â€¨

Erin Fetherston
For a spate of frilly, feminine frocks, The Butterfly resto in TriBeCa was an apt setting for Erin Fetherston’s latest. The downstairs bar proved dark, mysterious, and perfect for downing a few cocktails, while the upstairs was bright and airy. A staircase lined with twinkling candles led to the presentation of looks, draped upon suspended mannequins and punctuated with vases of hydrangeas. Issue upon issue of Martha Stewart Weddings featuring Fetherston on the cover with her rockabilly hubby, Cobra Starship frontman Gabriel Saporta were scattered throughout the space. The collection included a wash of white gowns in varying lengths, with touches of florals, flouncy detailing and pleats. According to Fetherston, “I really felt like this needed to be a happy, upbeat collection, so color is really important, texture and embellishment.” So, was the designer’s summer filled with newlywed bliss? Fetherston, glowing with happiness, answered with a resounding “absolutely!”â€¨â€¨

WHIT
There’s nothing like a trip to a foreign country for a designer to gather mounds of inspiration, as was the case for Whitney Pozgay this season. The CFDA Incubator member brought along her husband, Parker Argote, and her pal, photog Greg Vore, and the trip’s sartorial outcome was filled with fresh prints and patterns. As a fitting, and rather intimate location, flower shop Benchet (known for their Indonesian and Asian blooms) provided a lovely backdrop for the colorful collection. Present were Whitney’s signature silk-collared dresses, an endearing black and white checked romper, and a coordinating striped crop top and skirt outfit. The colorblocked roosters proved to be a project unto itself. Pozgay  took Vore’s snapshots, had an illustrator “translate them,” and then Vore hand-painted the pictures. No small feat! Whimsical turbans, chic sunnies, and a sandals collab with Jacques Levine were the final touches, sweetly accompanied by an assortment of mini donuts, smothered in sugar.

Tia Cibani
A floor lined with bits and pieces of confetti can sound so Times Square during New Year’s Eve, but combined with the luxurious, grown-up namesake collection by the former Ports 1961 designer, the ambiance was everything but. The collection was comprised of dusty pink, snow white, deep black and seafoam green. On the coif front, Cibani borrowed a braided updo from Frida Kahlo. A structured peplum suit contrasted with a geometric dress, while a strappy tank and flowy skirt was followed by a cocoon jacket. The final look, a voluminous pale dress with pink details and a cinched waist had riveting details that begged to be explained. “I turned out the seams and did piping with the neon pink that is the subtle detail that marries one piece to the others in the collection,” Cibani said of the finale frock. Fascinating indeed!

WHIT And Cointreau Team Up For A...