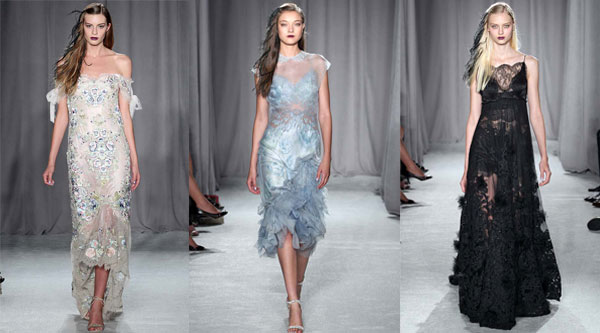 (NEW YORK) Marchesa
Seeing as Marchesa is synonymous with romance, Keren Craig and Georgina Chapman stayed true to what they do best this season. There was a touch of dark glamour via black feathers dotting the coifs and plum matte lips, a majority of the collection featured floaty tulle frocks embellished with flower appliques and wound with ribbon. With an eye on the Twenties, Thirties, and Fifties, the clothes spanned the decades featuring styles that were popular during those exact time periods. For the Twenties, silk fringe was draped into a pencil skirt and strings of pearls swung with a musical quality on a full-length dress. Bias cut slip dresses, repping the Thirties, were hand painted with florals and toughened up with black tulle or made light as a cloud with white tulle. When the collection was brought into the Fifties, tea length gowns were all the rage, especially when topped with sheer T shirts, revealing floral bustiers underneath. While Christian Louboutin offered up a breathtaking selection of red-soled pumps with winding ankle straps to accompany the frocks. But the chicest accessory at the white carpeted event, held at the New York Public Library, just might’ve been the floral tattoos whipped up by Scott Campbell.

Philosophy by Natalie Ratabesi
What is Philosophy by Natalie Ratabesi’s philosophy? The more white-washed a collection, the better! Set on a white runway in a white room, nearly all white looks were shown, quite perfect for the sweltering temps outside. There were a few pops of color, first introduced via a lime green clutch accompanying a white overcoat and tank dress. Later, a white silk tee got punchy thanks to cotton candy pink pants. The bubblegum hue made even more of a splash when the hue appeared on a short sleeve button down and pants, just slightly less flowy than the ones before. The collection’s more minimalist moments got jazzed up by pieces like a wide column skirt with a rhinestone-festooned waistband, or, say, a fisherman sweater covered in dark grey pompoms.

Nanette Lepore
A happy designer tends to shine through in the season’s chosen color palette. Nanette Lepore chose to use daffodil, white, poppy and aqua to express joie. As a playful riff on sports wear, the runway featured a plethora of drawstrings and racerbacks! The strings cinched a skirt, gathered a racerback tank, and broke up a long silk jumpsuit. A nude leather top was cut into a racerback shape, offering an upgrade to the usual cotton tank. The mods looked comfortable in their struts down the catwalk. Not just because the clothes were beautiful, but because their shoes achieved the covetable blend of comfortable and stylish. Finished off with a white chunky sole, the blue and white patchwork pieds weren’t too high but were showy enough to be the perfect finishing touch for each outfit. Topped off with bright red-orange lips and hair that looked like it just didn’t care, the Nanette girl this season was cool, composed and full of life.

Jeremy Scott
Two key factors about a Jeremy Scott show: his color palate always spans the rainbow, and nothing is off limits. Well, aside from being conservative! With the help of Kenny Scharf, Scott clothed his male and female models for a spectacle that could easily rival a live concert. Which the show basically was, minus the music. The front row crew included A$AP Rocky, Chanel Iman, Nicki Minaj ,and a trio of Jonas Brothers. When the models weren’t decked out in images of Mars monsters or colorful scribbles, they were encased in shiny black PVC and covered in aimless zippers. On the animal front, a lime green croc skirt was paired with a sheer orange cropped tank announcing that “Earth Sucks.” For the guys, there was an “I’m A Mess” tee with stiff croc pants. Hot red python and fuzzy purple zebra print mingled on one look, evoking an over-the-top fashionette.