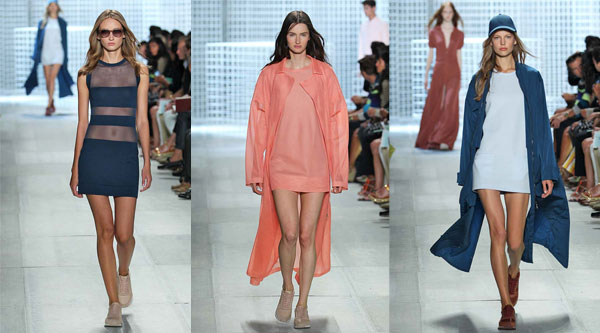 (NEW YORK) Lacoste
It was 80 years ago this year that René Lacoste invented the polo shirt for the tennis courts with its now-iconic crocodile logo. So it’s no wonder that creative director Philippe Oliviera Baptista took to the courts for his inspiration. More specifically, he was thinking of the clean, straight lines that set the boundaries on green asphalt. While all-white looks certainly made their way into this collection, like a sheer white button down shirt dress resembling a tuxedo shirt, much of the collection was rife with muted colors such as a clay-like beige or cerulean blues that gave way to mint greens, which were meant to suggest the process of the sun fading colors on the court. Monochrome was key here, as well as slouchy, cool comfort. Looks like a pale blue short colored crop top worn with a high-waisted trapeze skirt were lined with cerulean blue stripes to work out the idea of the court lines. But overall, the collection had that sense of understated chic that is so classically French that made us want to jaunt off immediatement to the South of France for a bit of afternoon tennis. Baptista aced it.

Jill Stuart
Borrowing from the girlfriends of rock stars past, Jill Stuart’s spring collection read as a complete packing list for a glamorous vacation. Present were sky-high wedges, a bit retro with their wooden heel, but modernized by the strappy black patent leather detailing. Bedhead coifs got complimented by dark eyeliner, as if slept in. Perfect for a long plane ride? A cream-colored long sleeve top and coordinating shorts in a romantic leaf print appliqué, a teensy black bikini with just enough ruffles (so apropos for a seaside day) while the cozy black and white sweater would make for a perfect cover-up. For a night on the town, there were sheer LBDs and microscopic leather miniskirts. The only thing missing? That rock star boyfriend…

Katya Leonovich
With a little bit for everyone, Katya Leonovich kicked off her collection with a few printed dresses, the patterns of which were cultivated from her very own paintings. But the stand outs of the show were the roster of leather dresses, and the techniques put into creating them to move the way they did. One of the frocks contained many pieces of red leather held together with a diagonal stripe of the same hide, while a lavender shift, with a high collar and a laced-up front, featured wave-like panels. The most shocking piece in the collection? A pair of shorts, covered, at least on the front panels, in stingray. A collection filled with surprises, large ribbons were pieced together to form shirts and even skirts. Tied to trot off the shelves!

Louise Goldin
While Kanye West may have made quite a ruckus sitting front row at Louise Goldin, his presence did nothing to take attention away from the clothes that sauntered down the runway at Milk Studios. The designer decided to skip all things spring and focus purely on warm climes and two of the greatest activities entailed: tennis and Coachella. With a play of cotton, in the form of tops, elastic poufy socks, and as layering pieces, the knitwear, in pale hues with pops of dark green and a bit of yellow, became a touch dressier. Space-age cutouts created a keyhole on one grey dress, while they took a classic one-shouldered dress to a place that silhouette doesn’t often saunter: modern, fluid, and absolutely perfect for any it-girl around town.

Porsche Design
Quite like the car of the same name, the Porsche Design runway was sleek, sexy, and oh-so-fast. The palette was strictly black, white, and navy, with accessories adding a touch of silver here and a glimmer of grey there. Creative director Thomas Steinbruck explained that his pieces were made with a feeling of “new digital ambiguity” which were seen in seams that were glued together at a high heat, rather than sewed and advanced laser cutting techniques. An oversized tunic in white neoprene opened the show, and set the tone for the minimalist silhouettes featuring slim leather skirts and chic leather tack pants. On the other hand, the boys, clean cut with slicked back hair, worked the jackets, whether they were short or long, and were allowed to wear leather shorts as well.

Gaga Brings The House Down For V