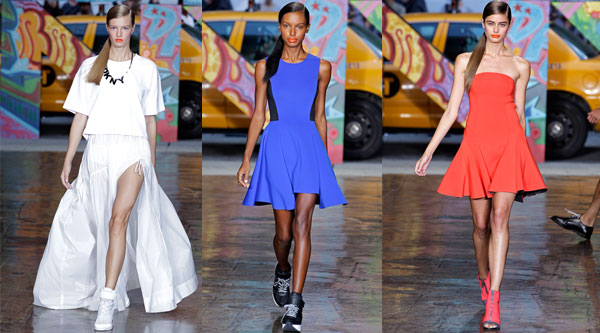 (NEW YORK) DKNY
For the 25th anniversary of DKNY, Donna Karan was back in a New York mood in a big way. Upon entering the space there was a giant DKNY sign done in graffiti. The show opened with the Beastie Boys’ “No Sleep Till Brooklyn” with Joan Smalls in a white button down worn underneath a pair of jean overalls with a navy blazer and white trench thrown over and topped off with a baseball cap. Other looks included nylon anoraks, bathing suits, backpacks, and dresses done in black and white bandana print. Plus! Plenty of vibrant neoprene on bomber jackets and swing dresses in hues like cobalt, cherry red, and aqua. And while there were denim jeans and jackets covered in sewn on patches and swimsuits worn with low slung track pants, the most overtly Brooklyn-esque and streetwise statements were pieces like a B&W matching sweatsuit worn with a white sheer anorak all completely branded with DKNY. If we weren’t already convinced by Alex Wang’s showing the day prior, branding is definitely back this season. Or, rather, it’s so passe that it’s cool again. What’s more Brooklyn than that? Also of note: Karlie Kloss closed the show, followed by Rita Ora, who skipped down the runway in a number that would have definitely been worn by Madonna, circa the 80s.

Ralph Rucci
Uptown girls and those in favor of sharply-cut sophistication, get thee to the Ralph Rucci wait list: Spring 2014 played with resplendent fabrics in shades of B&W, a flash of bronze segueing to olive green, plenty of pinks, and subdued creams. Rucci experimented with the cuts, proportions, and construction to exceeding elegant effects. The subdued color palette contrasted with complex beading. Rucci’s flirtation with laser-cutting made a cameo in the crop of daywear, which included laser-cut leather frocks and silk chiffon blouses mingled with tuxedo pants. Other fanciful detailing included hand-stitched pailettes and beaded tunic dresses. By nightfall, it was all about elegant feathered dresses and tulle gowns, comprising a continuum of hand-stitched and intricate details on each ensemble within the couture collection. And Rucci always nets quite the front row set of loyalists. Just ask Martha Stewart: This is actually my first fashion week show this season! I look forward to Ralph Rucci every year.” You’re clearly not the only one, darling.

Vivienne Tam
As the lights dimmed on Vivienne Tam’s latest show, an audible ‘ooh’ washed over the crowd, a reaction to the silhouette of the city of Shanghai that flashed before the first model took to the runway. While the image of the city was a modern view, Tam took a peek into the past culture, most notably towards Shanghai calendar girls of the twenties. This interpretation was quite far from literal, instead using modern silhouettes and the prints that Tam has become quit accustomed to adorning her collections with, but embracing their individuality. Motifs including lotus were printed on pants, cut out of tweed jackets and adorned head to toe outfits, without overtly referencing back to the inspiration. Many pairs of teeny tiny shorts marched down the runway and aimed to be modestly covered up with an oversized jacket, but it’s not like they’d be worn to work anyways! As the crop top trend carries on, Tam offered a slightly less teeny-bopper option: an oversize crop, flowing bigger in the back and featured quite a bit of fabric, for the more faint of heart of course.

Jeremy Laing
Club kids of the Nineties, rejoice: Jeremy Laing is bringing back the rave, in a form that is worthy of the aughts, of course. But this club we speak of was not a hot New York dance spot or a ravey London underground secret, instead it was a “sunset beach rave in Malibu.” But of course! This was echoed quite clearly in the men’s see-through plastic ensembles, complete with coordinating rain jackets, as well as the ladies pink suiting number with elastic-waist shorts that hit below the knee, paired with a shirt reminiscent of the most epic Los Angeles sunset. Some not-so-obvious hits of this raging dance party were found in pinstripes, which were heavily sprinkled about the collection. No longer reserved for uptight businessmen, these stripes adorned onesies for men, accented with pull zippers and decorated a crop top that gave way to a slim pencil skirt. The femmes and hommes didn’t just share the runway at this show; they shared prints as well. Whether it was a pastel yellow and black paint swish print or a sheer silk with square appliqués, the pattern-happy collection was rather equal opportunity.

AllSaints
Praise be the brilliant soul who found the old leather factory that the AlllSaints presentation was held in, because the gem of a spot on Mercer Street is slated to be torn down shortly. While its still standing, the authentically aged floors, exposed brick walls, huge skylights and circular radiators were the ideal backdrop for a collection that seriously upgrades the brand’s usual fare. The stand out pieces were easily the crop of bonded leather beauties: a leather trench sans sleeves and fussy detailsm for example, or that cocoon-shaped jacket. But don’t forget a classic motorcycle style, the beloved silhouette executed with precision.  By adding onto the moto look, chief creative director Wil Beedle took a focused, controlled approach to the silhouette. The brand is going through an evolution of sorts, paying a lot more focus to their designs, and it’s showing. A long silk blazer paired with a dress was grown up, And the shoes? In a league of their own. Expect to see these pieces for the pieds launching in four weeks, just in time to stock up on black booties and sultry heels for the fall chill.

Tales From An Ex-Mod! With Debi Mazar