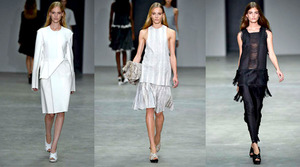 (NEW YORK) Calvin Klein Collection
She’s come undone. It’s Francisco Costa‘s 10th anniversary chez Calvin, and while Fall was all about neat militarism, this season was about leaving things unfinished. While the collection had the classic, clean minimalist aesthetic DNA of the brand, hemlines remained unfinished on every piece, lapels hung off coats like flaps to reveal hints of color, a pair of white wide leg pants had giant cuffs as though meant to be hemmed, but intentionally left as is, and a woven black bouclé jacket had multicolored thread woven in that hung like loops around the seam as though the fabric had been pulled. A standout black and white dress was made entirely of loose thread for a cool take on the fringe trend. When Costa came out for his bow, his crisp white button down still had the dry cleaner’s tag on it (something he said he’s been doing on purpose when The Daily caught up with him at Calvin Klein muse Rooney Mara‘s screening of Ain’t Them Bodies Saints last month). Perhaps a symbol that this fresh new outlook is just the beginning for what Costa has in store for his second decade at Calvin Klein Collection.