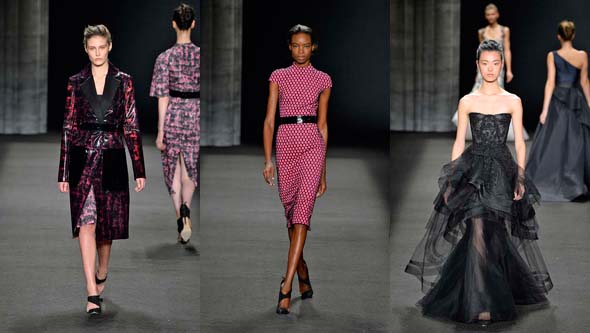 (NEW YORK) Monique Lhuillier
It was a slow start to Monique Lhuillier’s showing. A solitary column stood at the entrance to the runway alluding to the architectural cues Lhuillier cited as an influence on the collection’s designs. The music lulled, the energy left something to be desired. Or was it how Lhuillier intended? “I wanted to cross over to the dark side; I wanted it to feel a little twisted,” Lhuillier told The Daily backstage prior to the show. And twisted it was: sensual with a twist, embellishment with a twist. “It’s about opulence. But I wanted people to think they were seeing one thing, then discover something new when they’re wearing it,” said Lhuillier. To wit: the skull detailing she incorporated into the evening looks so gorgeously and subtly. Upon closer inspection, the skulls were cut from her signature lace. For the daytime, there are oversized cashmere coats with patent leather, vinyl coats, and neoprene. Midi-length skirts dominated daywear, and culottes made an appearance on more casual looks. Asymmetrical mules were a highlight of the collection: it’s the hardworking show silhouette that just won’t quit. Houndstooth and tweed made de regulier autumn appearences. Traditional lace was traded for graphic netting, amounting to a collection more modern and sculptural than the designer’s usual frocks.

Sally LaPointe
Drama can be good. Drama can be bad. But when it comes to proportion, drama’s the only thing that really matters. At Sally LaPointe, ruffles were maximized, knits erred on the larger side, and furs dominated ladylike jackets. Leather skirts, sleek jumpsuits, and powerful pants were done in B&W, while gray, ocean blue, and camel made appearances on outerwear, fur, and circle skirts.  The collection was clean and sharp, featuring only two prints: a silver zebra and bluebird. The latter was culled from Charles Bukowski’s poem Bluebird, from which LaPointe grabbed inspiration this time around. Pirarucu fish skin, which looks like a very zoomed-in snakeskin, covered structured jackets and created LaPointe’s first foray into clutches. For this collection, we’ll endure any sort of drama, please and thank you.

Lacoste
This may not come as a surprise, but sportif chic is a general favorite at Lacoste. However, this season, the sport is not tennis, it’s golf. For Fall, Lacoste rolled out a bundled up and tailored version of the game, sans pleats, polos, and clubs. In their place? Swingy skirts, athletic dresses, and utilitarian jumpsuits. Creative director Felipe Oliveira Baptista’s riffs on the game were well thought out; the prevalence of angles popped up on a crop top and skirt combo, and variations on plaid and argyle were subtle and unobtrusive. As for that signature alligator? You had to look hard to spot one; was even cheekily replaced by a tee and a ball in some instances. The colors were easy on the eyes: a calm mix of burgundy, navy, forest green, grey, and a pop or two of light green. The boys were also up to play, but they showed up in brilliant red suits and a few hommes were prepared for a round in the rain, complete with nylon hoods. We’re just hoping this game of golf is held on an equally stylish course.

Ostwald Helgason
Bold graphics combined with classic lace: Ostwald Helgason’s collection came off as a piece of mixed media art. A connection is easily made thanks to the inspiration—German artists Anselm Keifer and Joseph Beuys along with the bold pop art of Andy Warhol, and the finished project. Design duo Susanne Ostwald and Ingvar Helgason likened their ‘tribute’ to the artists as a sartorial take on vandalism. “In Tim Burton’s Batman there is a scene where they break into the gallery and make things new. It is a little bit of art vandalism, basically,” said Ostwald. Honorable vandalism, if you will. Because despite their need to rebel, Ostwald Helgason aims to be taken seriously, which is why they made their runway debut this season. More serious pieces included structured felt suiting, embroidered lace, and demure hemlines. In a better example of their wit, there were metallic denim trousers and sweaters emblazoned with peeling bananas and apples, paying homage to the mid-centruy pop art invasion. Boxy T shirt dresses cinched with bustiers resembled kimonos even added a cartoon-ish element. The imminent evolution of this young brand is sure to be one to watch.