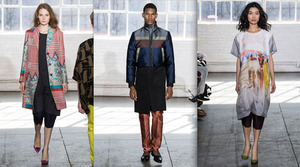 (NEW YORK) Duckie Brown
The iconic men’s label Duckie Brown may have delved into womenswear for Fall 2014, but that doesn’t mean they simply threw girls into clothes made for boys. Rather, there were ladylike looks with a twist of masculine power: a flimsy silk skirt was topped with a dark bomber jacket and a pair of midnight blue evening trousers brought to a casual level with a grey layered silk tee. The toppers were top notch as well, particularly a multi-patterned jacket with zigzags, and plaid. Each look got paired with pink and electric green Ruthie Davis HEART Duckie Brown stilettos. As for the boys? Their looks were a bigger play on proportion, and a welcome introduction to the cropped jacket for the male set. A red blazer version was particularly striking, layered over a navy polo and a cerulean basketball skirt. Layering also cropped up, in amalgams of bright pants, loose tees, and manly skirts. The Duckie Brown girl has a bright future, and her boy should definitely stick along for the ride.

Jay Godfrey
It was a trifecta of firsts for Jay Godfrey, who kicked off the first day of fashion week with his first show in New York City at The Hub at The Hudson Hotel, the first offsite affiliate location hosted by Mercedes Benz. Inspired by the “offspring of rock n’ roll legends” like Theodora Richards, Alexandra Richards and Zoe Kravitz, Godfrey is eager explore “how they came of age and developed their own personal style,” the designer told The Daily backstage. Which is no small feat when your father is known for his unique style almost as well as he is his rocker chops. His modern twist on ’70s rock n’ roll staple pieces like shifts, miniskirts, leather bomber jackets and jumpsuits has already caught the attention of celebrities including Eva Longoria, Emma Stone, Jennifer Lopez and Eva Mendez. Throughout his Fall 2014 collection, Godfrey stuck to a dark, brooding color palette of black leather—classic rocker garb—interspersed with velvety burgundy, indigo, and cream-over-black lace, which played well to the rebellious nature to his collection. Between vibrant fringe, stud and zipper detailing, and flashy of metallic sequins, Godfrey’s collection is nostalgic wink to fashion’s rockstar-inspired past.

Raoul
Inspired by John Chamberlain’s crushed metal sculptures, Raoul’s Fall 2014 collection features one of a kind structured separates and accessories that combine luxury with an edgy twist. The collection was shown at the Rose Building at Lincoln Center in a minimalistic white room. The models stood by black lined sculptures, which spoke to the architectural theme of the collection. This season welcomed a new addition to their team. Raoul’s ready-to-wear designers, Douglas and Odile Benjamin, tapped designer Raphael Young, to create an exclusive accessories collection. Raoul has moved the production of their accessories to Italy, and is diving head first into the accoutrement market with Young acting as the creative director. Young maintains the quality of luxury expected by the Raoul customer by only using authentic Italian leathers. Odile explained that Young’s vision was in tune with her ready-to-wear collection and told The Daily, “We focused on the whole architectural aspect with crushed gold and metallic elements, which stemmed from the same inspiration and color palate, which was absolutely critical.” Through this inspiration, the Benjamin’s guided the ready-to-wear collection toward structure, graphic designs, clean lines, and metallic colors. A great example of this was a tailored coat that transformed from black into a blurry white plaid paired with a graphic cheetah blouse and a B&W spotted skirt. Young explored the same vision through his accessories collection using metallics, cheetah prints and classic black colors to create shoes and handbags that was perfectly cohesive with the Raoul ready-to-wear collection. He explained that his accessories could be worn with a “cool, relaxed look or something more sophisticated.” The unique collaboration combines high quality luxury items with a sexy edge, making this a go-to collection for fall and winter options. Expect a second accessorizing collab soon!

Marissa Webb
With a little bit of plaid, a touch of leather, a heavy dose of black and white, and restrained bits of color, Marissa Webb debuted Fall 2014 on her own terms. This former J. Crew designer continues to prove the power of staples for “the girl who’s on the go, but who wants to be chic and polished at the same time.” What does that translate into? Shearling-lined pea coats, plenty of leather leggings, and suit separates that can be dressed down or up. There was also a plaid shirt layered under an evening gown for an artfully mussed take on eveningwear. Once Webb’s collection veered from the grey tweed path and found its way into the colors, things starting picking up. A blush pink vest had everyone on the edges of their seats (that is until rouge entered the picture). The chosen hue, saffron red, was both shocking and pleasing at the same time, especially when cut in a glistening silk.

Jay Godfrey on His Design Collaboration with...