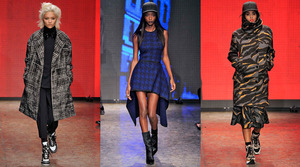 (NEW YORK) DKNY
Though the big elephant in the room is the anniversary of Donna Karan’s namesake label turing 30 this year, let’s not forget her cool sister DKNY who turned a mere 25 in September. This year, DKNY showed that New Yorkers (in their words) have “a zillion sides, and so does their style.” The collection mixed things up with street style showing a whopping 55 looks that went by in a breeze thanks to a mix of real models including Sasha Luss and New Yorkers such as Chelsea Leyland and Hannah Bronfman. Real people on the runway? We’re on board with that, and so was the rowdy crowd who cheered on a different take on the runway. “I wanted to represent New York,” Karan told us after the show. “It’s about the streets, people and energy. The people are what make New York.” What will the people think? Let’s put it this way. Front row sensation Rita Ora wore a leather coat with the words on the back of it: “When I wear DKNY, I feel like a bad bitch!” Bad bitches have nothing to worry about come Fall.

Thakoon
In a room striped with hot pink flowers on a cobalt blue background, a positively cheery fall collection was unveiled by Thakoon. Little did the audience know that print would be featured in the clothes, among many other bright florals. Look une included a mini poncho lined with a yellow, pink and blue floral that spiced up a rather conservative white button down and navy flared skirt. In outerwear there were a variety of chic options to stay very warm, as Thakoon put his spin on the puffer jacket, extending it below the knee and covering it in plaid or embroidering it with a set of clashing blooms. There were also a handful of blanket-esque toppers, providing a built in bundling accoutrement. Editors and buyers alike must have been agreeing with Thakoon’s choice to play “Hallelujah,” as they now have a chic reason to stay warm next February. The booties in black and caramel crocodile were ones to covet, especially considering they made the mods feet look tiny.

Lela Rose
You can find Lela Rose’s collection at the intersection of entertaining, food, and fashion. Inspired by the talented chef and artist Ferran Adria, the collection is full of nods to his creative genius. Rose told The Daily of her inspiration, “I think that a lot of the inspiration comes from what you are doing and this relates to my lifestyle because I am always entertaining and cooking, but the collection is really about him.” The color palette seen throughout the collection served as the framework for textural twists by combining smoky neutrals of ivory and gray offset by bright shades of chartreuse, fuchsia, and azure. Gold dusted gazar and pearl details were uber feminine and, strangely enough, directly influenced by the results of Adria’s molecular gastronomy. The combination of textures was reminiscent of the experimental process of creating a signature dish. Woven hems, embroidered grids, silk layers with feathers, and cashmere knit adorned with crystals created refined architectural silhouettes that were both unique and sophisticated. Reinterating her inspiration of combining food with fashion, Rose’s swag bags included an oven mitt, recipes, and beauty cosmetics. Bon appétit!

Porsche Design
If the jet set that hits St. Moritz for a ski trip each year didn’t have enough to choose from regarding their wardrobe, they now have more options. Porsche Design’s creative director Thomas Steinbrueck looked back on his childhood in the chilly destination to add a touch of Seventies glam to the collection. A glossy camel bomber jacket alluded to the theme, but it wasn’t overtly retro. After all, this is Porsche we’re talking about. The lines were sleek, glossy, and quite polished, and devoid of fussy prints or buzzy details. A transparent top and skirt combination made in an iridescent plastic fabric erred on the side of high fashion, but became retro with burgundy leather boots. After all was said and done, it was a surprisingly rich collection, and was right on the point.

Fit To Be Tied