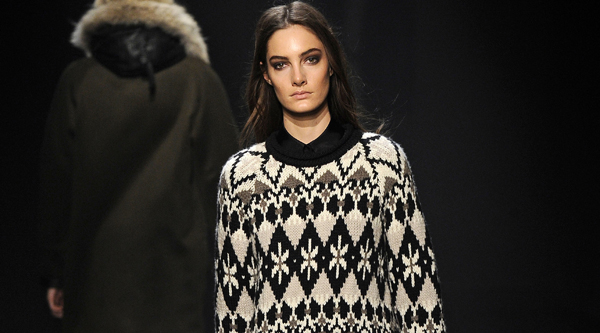 (NEW YORK) Yigal Azrouël
Sexy, tailored options abounded for Fall, like trim dresses with daring slits alongside boxy jackets and skinny pants. Fur added a touch of luxe, and the collection included several cute, fur-collared anoraks—a style staple that seemed extra appropriate given that Azrouël showed just as a massive blizzard threatened to paralyze the Northeast. Ponyhair and leather also lent texture, in the form of panels on dresses and sleeves. The collection was mostly black, and it looked sleek and dangerous—like a beautiful woman who may do us harm, according to the designer. “If we touch her, we could get killed,” Azrouël explained to The Daily backstage.

Tocca
Tocca designer Emma Fletcher first had the idea for her fall collection when a friend mentioned coveting a suit so sexy and so perfect you could “wear it to court if you murdered your husband.” Take that femme fatale character, add a few re-watchings of The Eyes of Laura Mars, and the result? A tightly-edited collection of sexy, tailored separates that toe that line between forties and eighties references. Transparency abounded, with chiffon and lace insertions interrupting sexy dresses and blouses. A houndstooth jacket and skinny pants, shown with a chiffon camisole, was perfect. And a blush pink skirt suit might just be the perfect thing to wear to your trial.

Rag & Bone
Rag & Bone’s fall collection started out all black and grey, in layers of leathers, knits, and wovens. The first moment of color was a leather coat in what the show notes called “mineral green”—a sort of winter-bleached mint, and very striking. Then, in a gradual, orderly procession, came pops of hunter orange, glen plaid, purple, royal blue, and more of that mineral green. All of the brand’s codes were expressed beautifully in this collection: the men’s wear influences, the sense of independence, and the slouchy sexiness of it all.

Tommy Hilfiger Men’s
The threat of Nemo couldn’t bring down Tommy Hilfiger’s massive men’s show at the Park Avenue Armory. Once again, the king of prep stuck to what he does best for the boys. The theme? Savile Row meets Ivy League, amounting to an amalgam of heritage and modernity. Per the show’s notes, Hilfiger strove for “tailoring without the stuffy formality.” Tommy reworked the classics with showings of navy blue, rich claret,  and ivory. The collection was rooted in British sartorial tradition, while keeping that all-American sensibility intact. Plus, who can argue with a show that had Marky Ramone of The Ramones sitting front row? Now that’s cool.

Sally LaPointe
If the number of fashion bloggers sitting front row is any indication of success these days (we know, we know, it is), LaPointe isn’t going anywhere with Man Repeller and pals taking front row duties for a collection inspired by the Depeche Mode song “In Your Room”. (Whatever it takes, right?) The 30 looks shown (paired with “we want them now” shoes by Alejandro Ingelmo) reminded us why LaPointe remains one to watch. It was all about leather with a color palette of camel, black and red. (Expect a lot of that very classically-hewed set of shades come Fall!). Edgy without going over the edge.

Things To Discuss: From Marc to Macaroons!