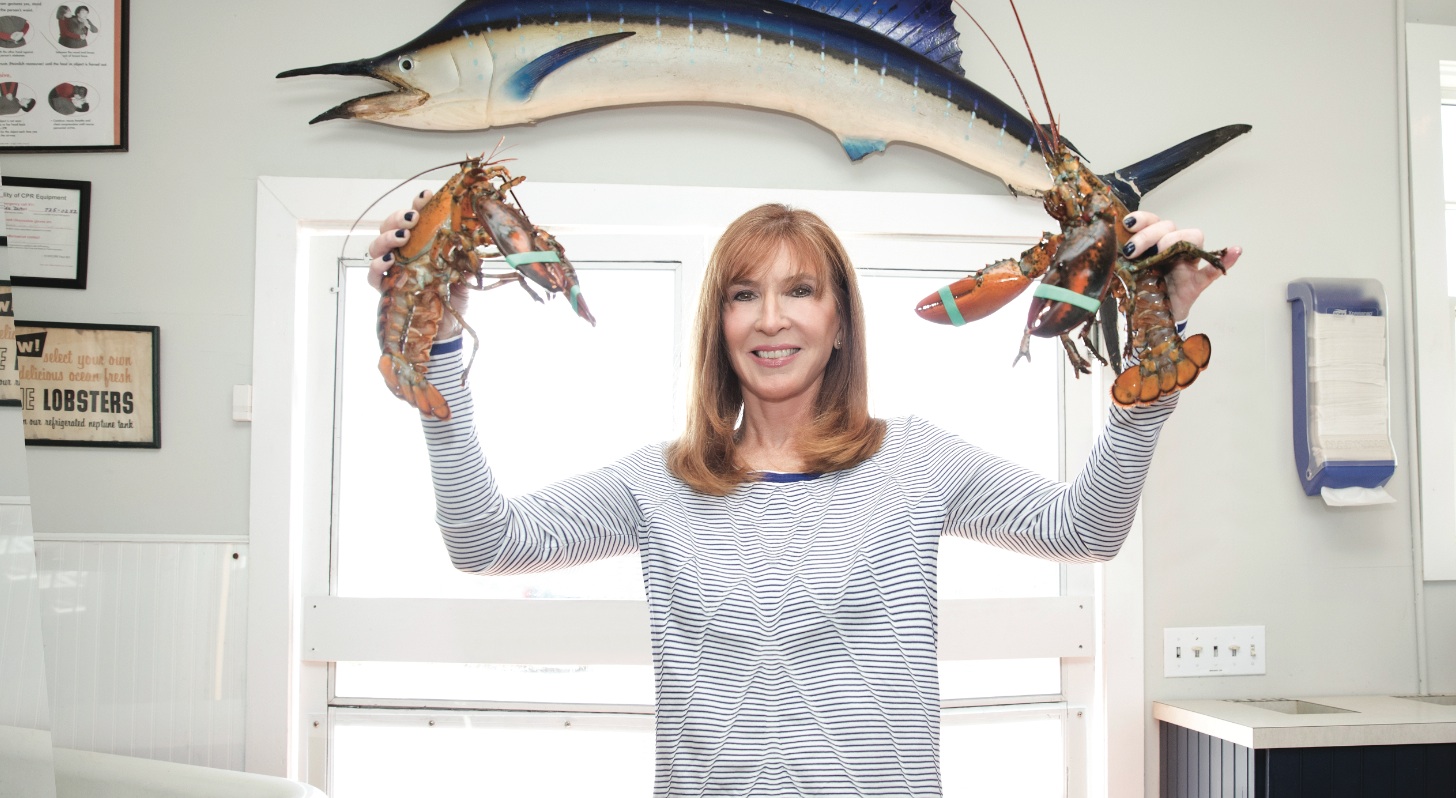 Designer Nicole Miller’s dinner parties are a seafood lover’s dream. Lobster risotto, fried oysters, bouillabaisse—you name it, it’s on the menu, made with the freshest ingredients from her favorite shellfish shack, The Dock House.
BY ALEXANDRA ILYASHOV

Where are we?
This is where I always get my lobsters! I love the place; I’ve been coming here for years. Their clam chowder and fried clams are amazing. Sometimes I just order 20 lobsters, take them out of the tins, lay them on a tray, put a towel over to keep them warm, and pretend I cooked them. I toss the bed of lettuce they come on, and keep the butter. I add more butter at home.

So you doctor up the butter?
No, no! I hate doctored-up butter. I find it extremely offensive when people put garlic in butter. And I don’t like drawn butter, either—I like the fat to stay.

Got it. What’s your earliest seafood memory?
I grew up going to Cape May, New Jersey, and I was always obsessed with lobster and clams. We’d go to this place called The Lobster House. My mom always made steamers, and she never knew how to get the sand out, so a little sand doesn’t bother me. One day, my dad brought home three dozen oysters and he really didn’t know how to open them, so he brought out all his tools from the garage. We got half of them open with a screwdriver and hammer. I’ve since learned how to open oysters.

Any tips for first-time shuckers?
You have to get one of those oyster knives and break the hinge. I’m still really impressed by people that can do it really fast. I can get a clam open a lot faster than an oyster. An oyster will always be a challenge.

What’s your seafood pet peeve?
Salmon. So much of it is farm-grown. If you don’t know where it came from, you shouldn’t go near salmon.

What are your greatest seafood hits?
I have this jalapeño clam-and-corn chowder. I took three or four people’s recipes and doctored them up. I also always do a tortilla shrimp soup, and I make great shrimp summer rolls, which I serve with a dab of hoisin.

Do you ever serve raw fish?
It’s all overrated! I mean, how much tuna tartare can you eat? Sushi all tastes the same because everyone drowns it in soy sauce and wasabi. It’s just not that interesting to me, though I do like the white tail with jalapeño at Nobu. Their sauces are amazing. But I hate mayo on sushi. It drives me crazy.

Are you into lobster rolls?
I’m not so interested. I’ll eat a mini one—for me, they’re worth about a bite.

And mussels?
I was never big on mussels, but I started making them after I had them with pasta, lemon, and mint on a trip to Rome.

What about uni?
I’m obsessed. It’s so great on pasta with sliced avocado. Another obsession is bottarga. Usually cheese and fish don’t go together, but bottarga and crab work really well with cheese.

Fried food: yes or non?
Love it! I went to New Zealand, where they have incredible fried food. I ate the best fried oysters on the planet at this great restaurant, Euro. I bought the cookbook by its chef, Simon Gault. The fried oysters recipe had this weird ingredient, trisol. I was like, ‘What the hell is this?!’ I found it for $200 online. I thought the stuff must be like gold, it’s so expensive. I expected a small, sacred amount, and a huge tub of this super-pulverized powder arrived. On the label it said, ‘For more recipes, go to FerranAdria.com.’ I think he uses trisol a lot.

Have you gotten much use out of your trisol stash?
I used it at a fried-food dinner party I threw once, where I served all kinds of seafood. It was the first dinner party that I didn’t have any leftovers from. There wasn’t a single shrimp left.

You obviously love eating fish. Do you like catching it, too?
I love fishing! I do it a lot in Boca Grande, Florida. In the Hamptons, there are lots of restrictions. If they’re not a certain size, you have to throw them back.

Do you do the gutting yourself?
I can, but it’s better if someone else does it. I own the equipment to take scales off, though! I like to put a whole fish on the grill in tinfoil with sesame oil, cilantro, lemongrass, and ginger.

When you need a night off from cooking, where do you get your fish fix?
My biggies are Tutto Il Giorno, where I always order pasta, Sunset Beach for their calamari, and The Clam Bar, where I get clam chowder.

How do you take your chowder?
My mother was really against thick chowders, but I hate Manhattan-style chowder. You can’t taste the clams; it should not exist. I feel the same about linguini and clams—I never get it with a red sauce. I’m so opinionated, aren’t I?

Nicole’s Seafood Staples…
LOBSTER SAFFRON RISOTTO
Ingredients:
1/2 small onion, finely chopped
2 tbsp. olive oil
1 tbsp. butter
1 1/2 cups arborio rice
1/2 tsp. saffron threads
Approximately 5 cups seafood or clam broth
1 cup white wine
Lobster meat from a 1 1/2–pound lobster chopped into small chunks
Directions: Heat broth in a saucepan to almost boiling; reduce heat to medium and add saffron. Melt butter in a large skillet and add olive oil. Sauté onions until soft but not brown. Add rice and stir with a wooden spoon over medium heat until translucent. Add the wine all at once and stir until absorbed. Add the broth 1/2 cup at a time until absorbed. Risotto is ready when the rice is firm but not crunchy. Add lobster. Season with salt and pepper as desired.

SUMMER ROLLS
Ingredients:
Rice papers (about 20)
Rice stick noodles (1 package, cooked according to directions)
Boston lettuce (1 head)
Shrimp (1 lb., cooked and cleaned, cut in half lengthwise)
Cilantro
Mint
Chives
Hoisin sauce
Large bowl of lukewarm water
Cloth towels and paper towels
Directions: Prepare all ingredients, and lay out cloth towel on counter. Dip rice paper in water until partially soft, but not soggy. Remove rice paper from bowl and lay out cloth towel. Pat dry with paper towel. Place half a leaf of lettuce, core removed, in center of rice paper. Put a handful of rice noodles, spread out lengthwise. Spread a small amount of hoisin sauce on top. Arrange three half shrimp lengthwise on top of noodles. Place two mint leaves and some cilantro on top. Fold rice paper tightly; form the roll. Fold in sides and finish roll. You may add two chives before rolling for decoration. If you are not serving right away, cover with wet towels.
Just before serving, cut into halves or quarters with scissors. Serve with Nuoc Cham or your favorite peanut sauce. 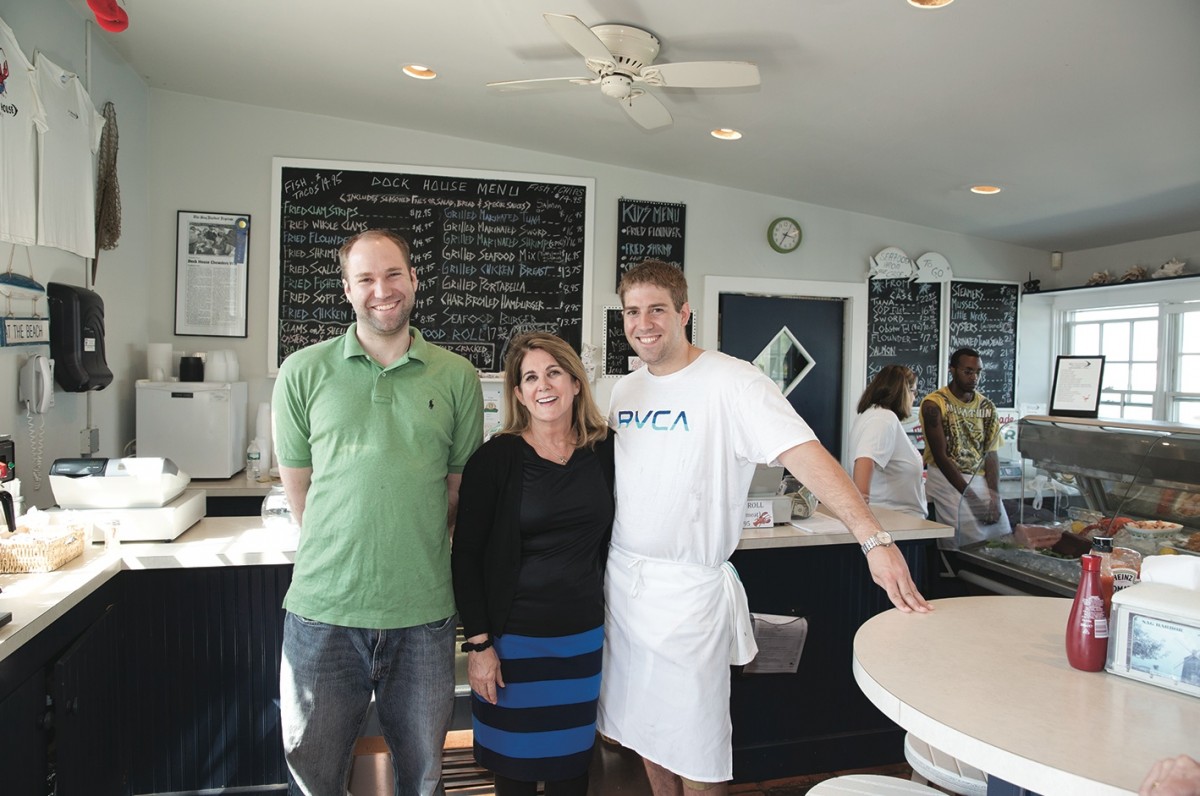 PLUS! Meet The Dock House’s owner, Andrea Shastid…
Why did you decide to take over The Dock House nine years ago?
My sons, Andrew and Alec, worked here when they were in college. I’d just finished my career as a pilot for UPS. I wanted another career, but I’d never been in the restaurant business. It was a greasy spoon, but I saw potential.

Is it tricky being mom and boss simultaneously?
It can be very trying. It’s like when they were growing up, all over again: “Noooo. Why is he leaving earlier than me?” But they’re both really helpful.

What’s your lobster situation like?
We keep them in a vintage bathtub. We go through 50 or 60 per weekend.

Who are the most extravagant orders from?
Definitely the yacht people. It’s not uncommon to have an order for, say, 70 cooked lobsters and 50 shucked oysters. That’s a $1,000 order!

What’s your hidden gem?
Our seafood burger. Where else can you get shrimp, crab, and salmon all in one burger?
1 Long Wharf Rd., Sag Harbor

The Next Generation: Kit Keenan

The Next Generation: Tripoli Patterson