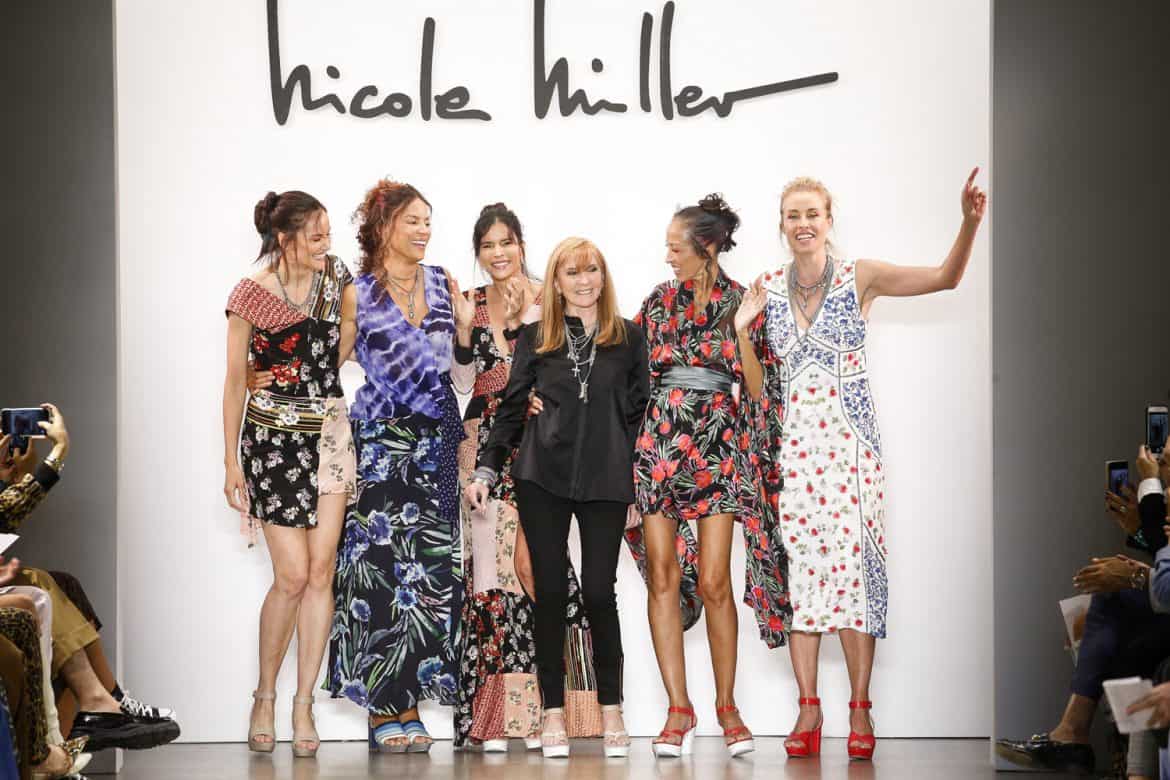 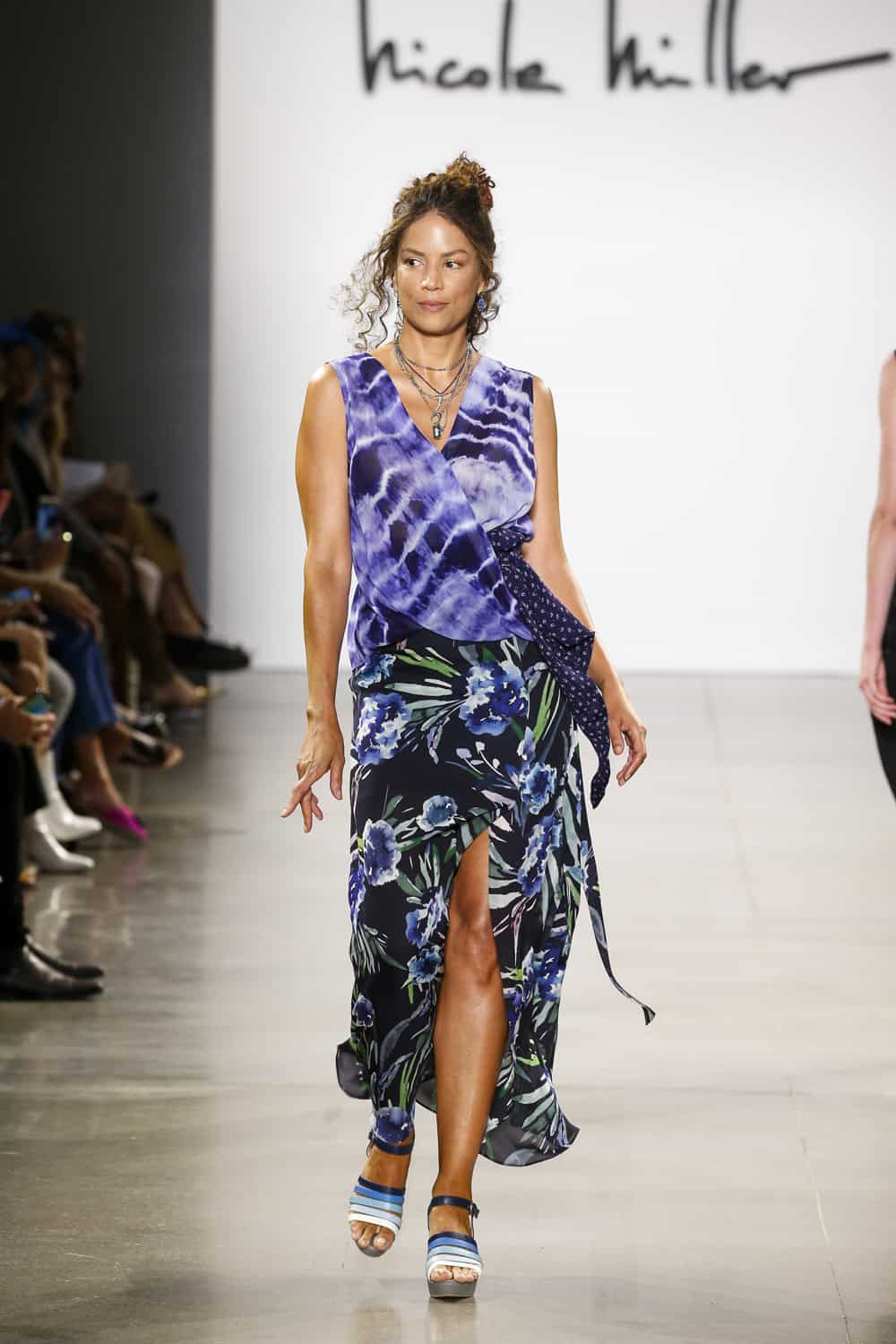 Cleveland’s participation in particular was a big deal. The model, who was diagnosed with colon cancer earlier this year, recently had an extreme operation, and is still going through chemo therapy. “If you keep your mind in your spirit, you can get through it,” she told The Daily backstage. “All my friends in fashion have helped me. I was so surprised that I got so much love. Our community is full of love, that’s how I feel. I love Nicole Miller, which is why I’m here today.”

“We’ve known each other since the very beginning and she said I should come do the show,” she added. “She’s done very well for herself and she’s still sweet and modest and nice and cute to look at. I just love her so I came to do the show!” 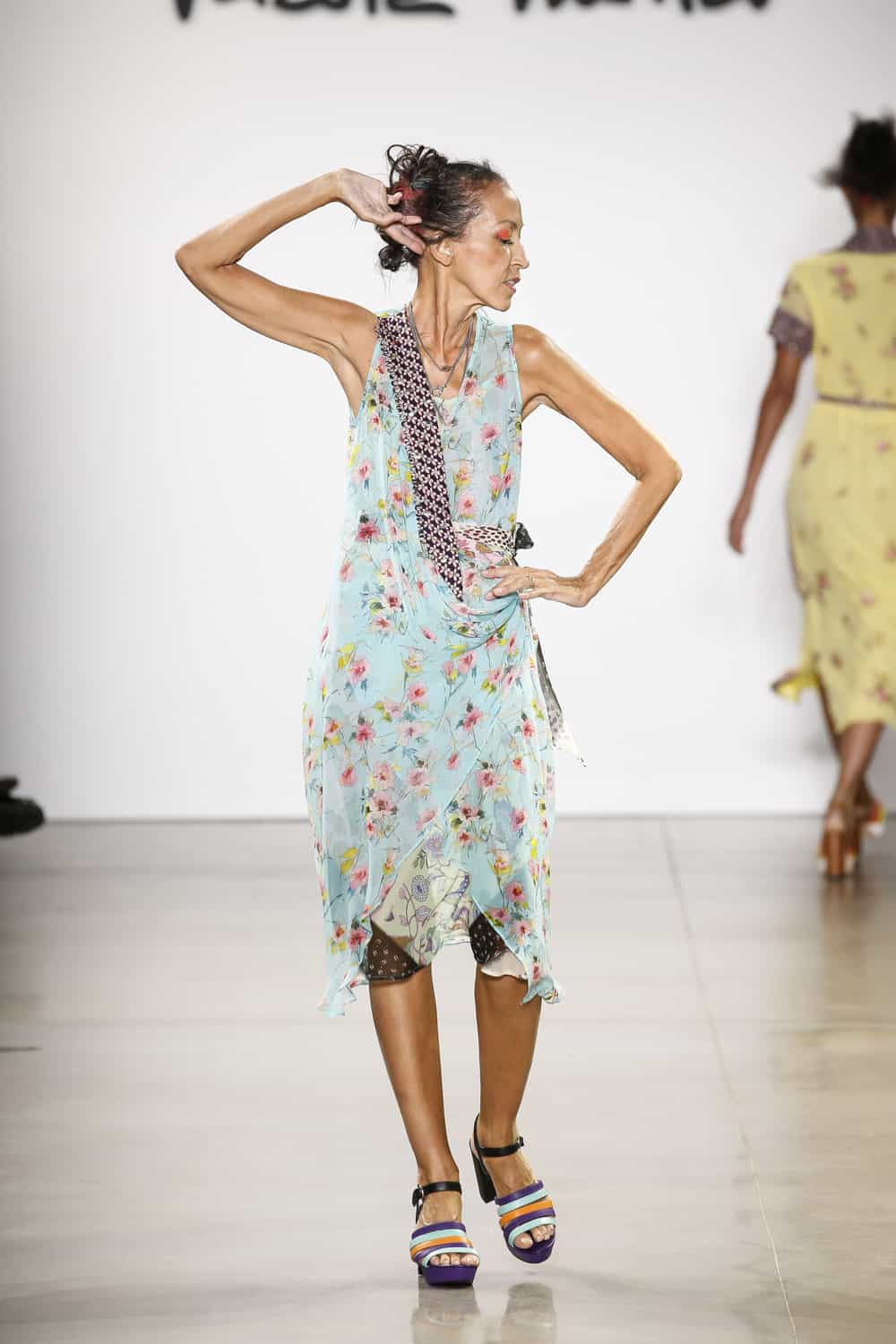 Cleveland’s sentiments were echoed by the other models who walked. Many of them remember Miller casting them in their first shows. “She was one of my favorite designers when I was doing this at my height,” said Mason. “She’s not only a fantastic creator, she’s a great person. She’s just so much fun. She wanted to bring back joy and fun at the show.”

“Nicole was one of the first designers who ever gave me a job when I came to New York,” added Vásquez. “I have such memories in my heart for her, because she made me feel empowered. When she called two weeks ago and asked me if I wanted to do the show, and its been 16 years since I’ve done a show, I said, “Absolutely I want to be there!” 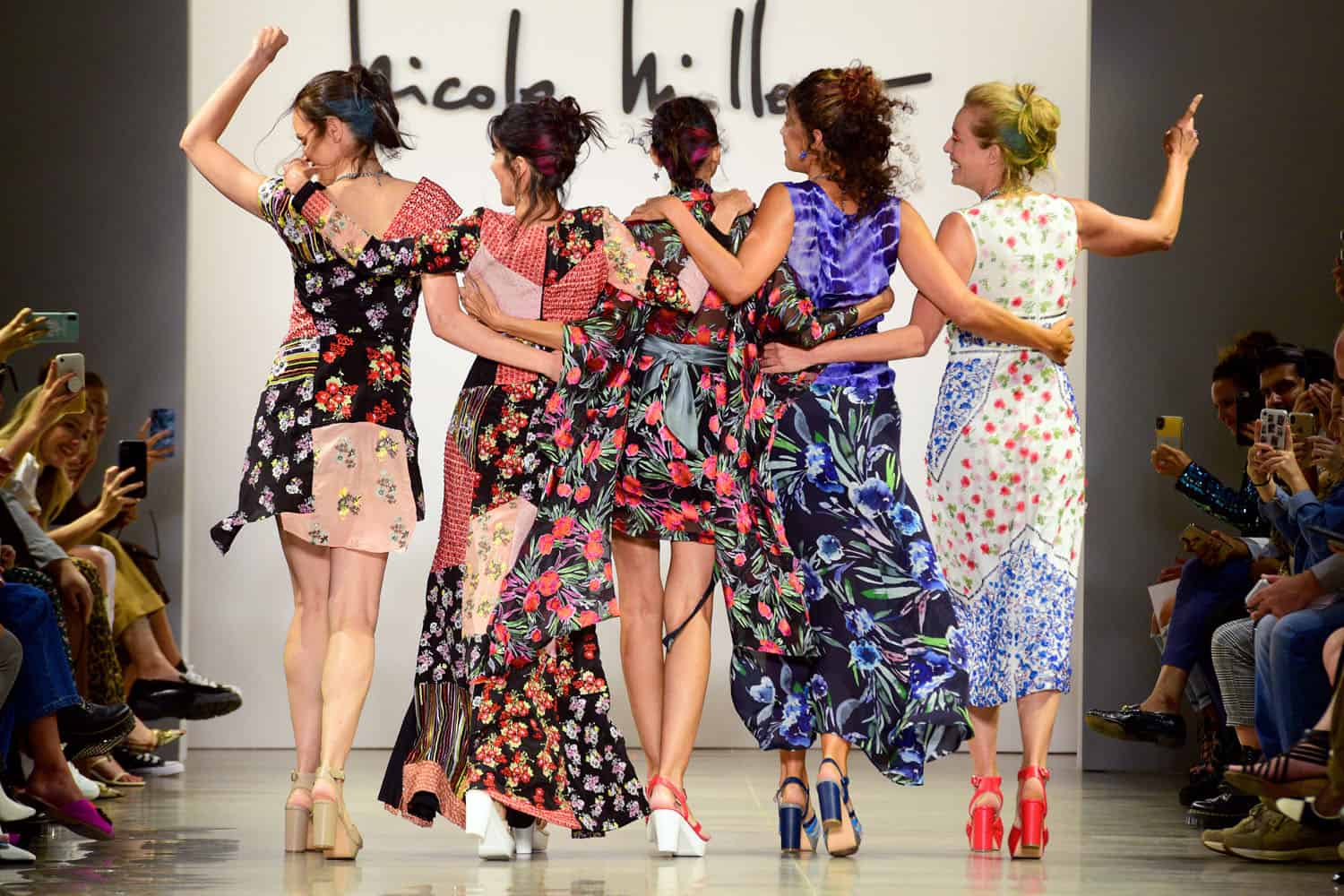 The Daily caught up with Miller backstage to learn about her casting process, and get the scoop on the collection.

Why did you want to bring these icons back to the runway?
I kind of don’t understand why they retire people so early. There used to be this thing where when I model turned 25, they’d have to retire. I looked back at the girls and they were all in meaningful shows for me, and Pat was the first model I ever met in New York. Veronica Webb was in my first runway show, and Claudia Mason was in my second or third runway show. Patricia was in a lot of my shows. These were all girls who I was closer to than others. I didn’t want to just have one [girl] in. The other girls walking loved walking [with them.] 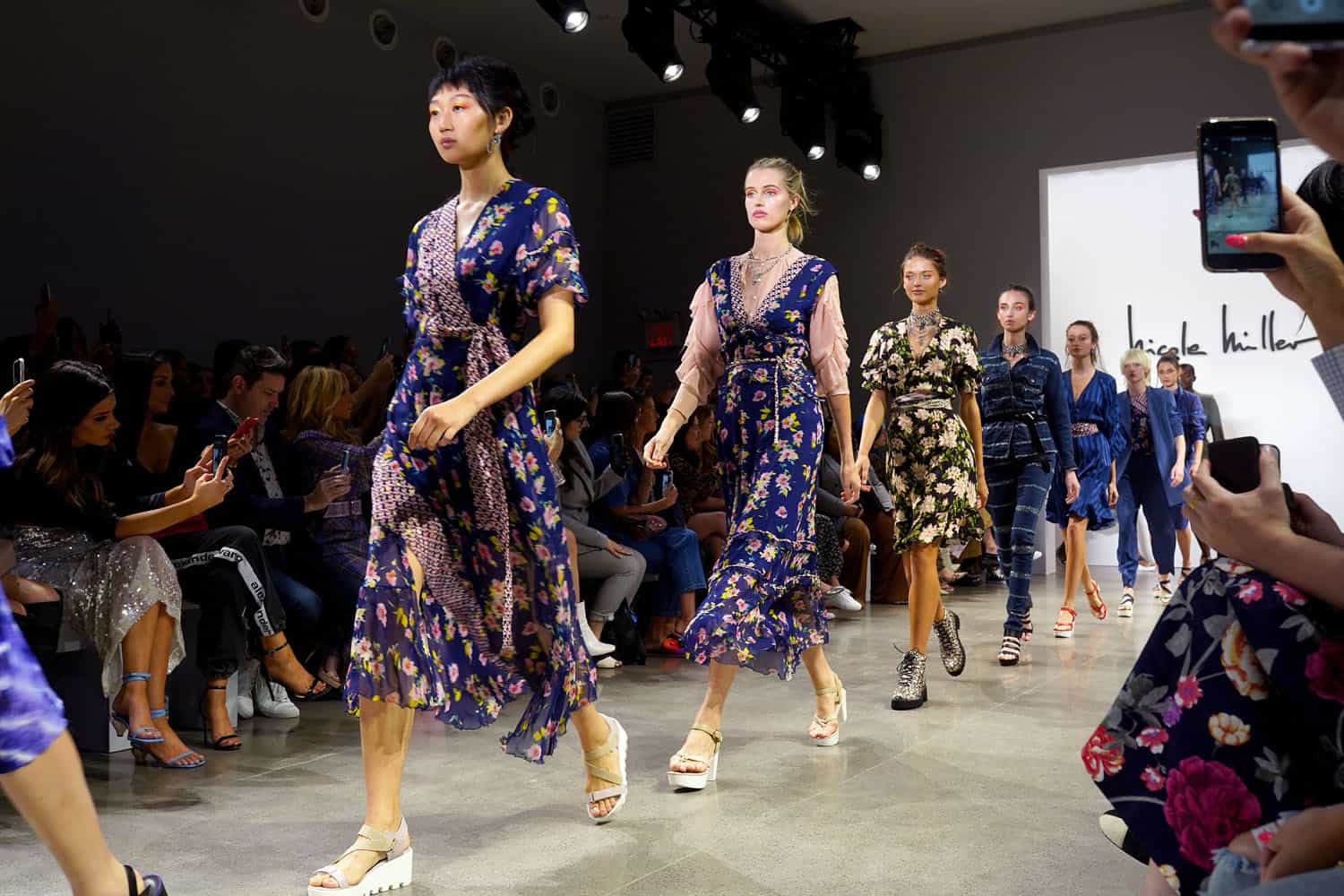 It was so fun!
We did a dress rehearsal and you can’t get Pat off the runway.

Tell us about the collection.
I call it Lost and Found. I went to Japan where I hadn’t been in 20 years. It was familiar and unfamiliar at the same time. It segued to me going through my closets from the past 30 years because I was reorganizing the office and I found droves of all this stuff I didn’t know that was there such as buttons and fabrics. I went with my sustainability thing. I brought back Japan, archival stuff, and models.

Everything Old Is New Again!
I thought about doing that Peter Allen song in the song, but I thought it was going be to be too cliche. 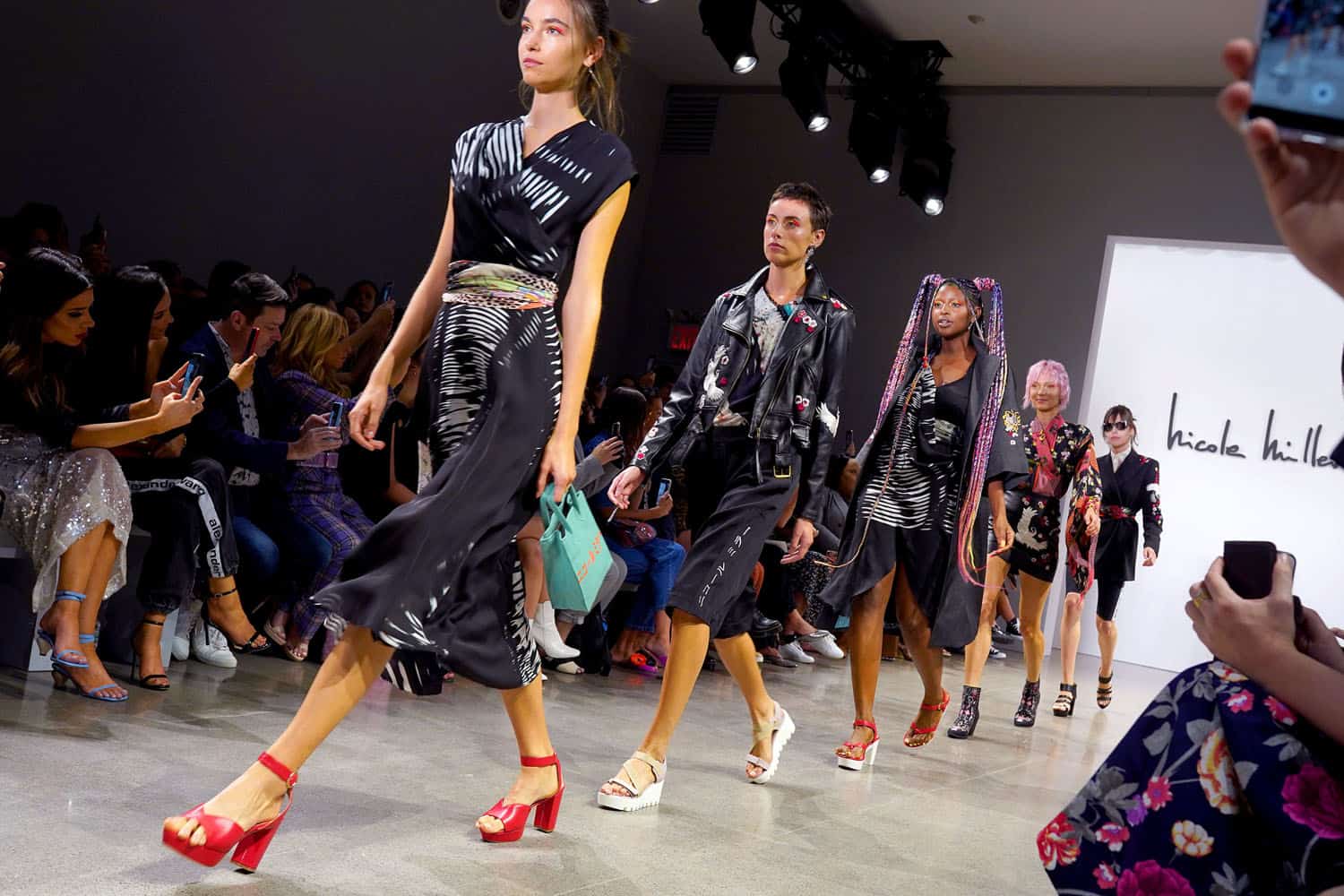