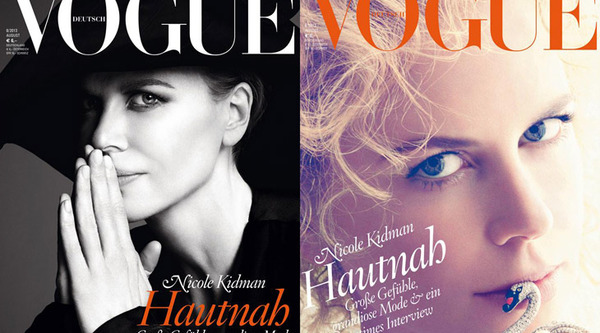 German Vogue announces that it has dedicated almost every page of its August issue to Hollywood hot shot, Nicole Kidman. Kidman is well known for her persuasive on-screen roles, in addition to her generously charitable acts as a the chicest citizen of the world. The 46-year-old star will be honored today in Berlin by the Cinema for Peace Foundation for her commitment to social change and activism for women’s rights. Kidman will be the double cover star of August’s German Vogue and will also play a leading role in the issue’s content. Some of her A-List friends, such as Naomi Watts, Hugh Jackman, and Colin Firth, even divulge how they really feel about this tres memorable actresses in the publication. Another feature of the Kidman-packed magazine? An interview between Ingrid Sischy and the red-haired raven. Editor-in-Chief, Christiane Arp added, “Success has not satisfied Nicole Kidman. On the contrary- her hunger for new experiences is undiminished. We are fascinated by that aspect of her character.” Sounds like the perfect choice for the heroine of the upcoming issue!

Look Of The Daily: Maria Sharapova In Valentino