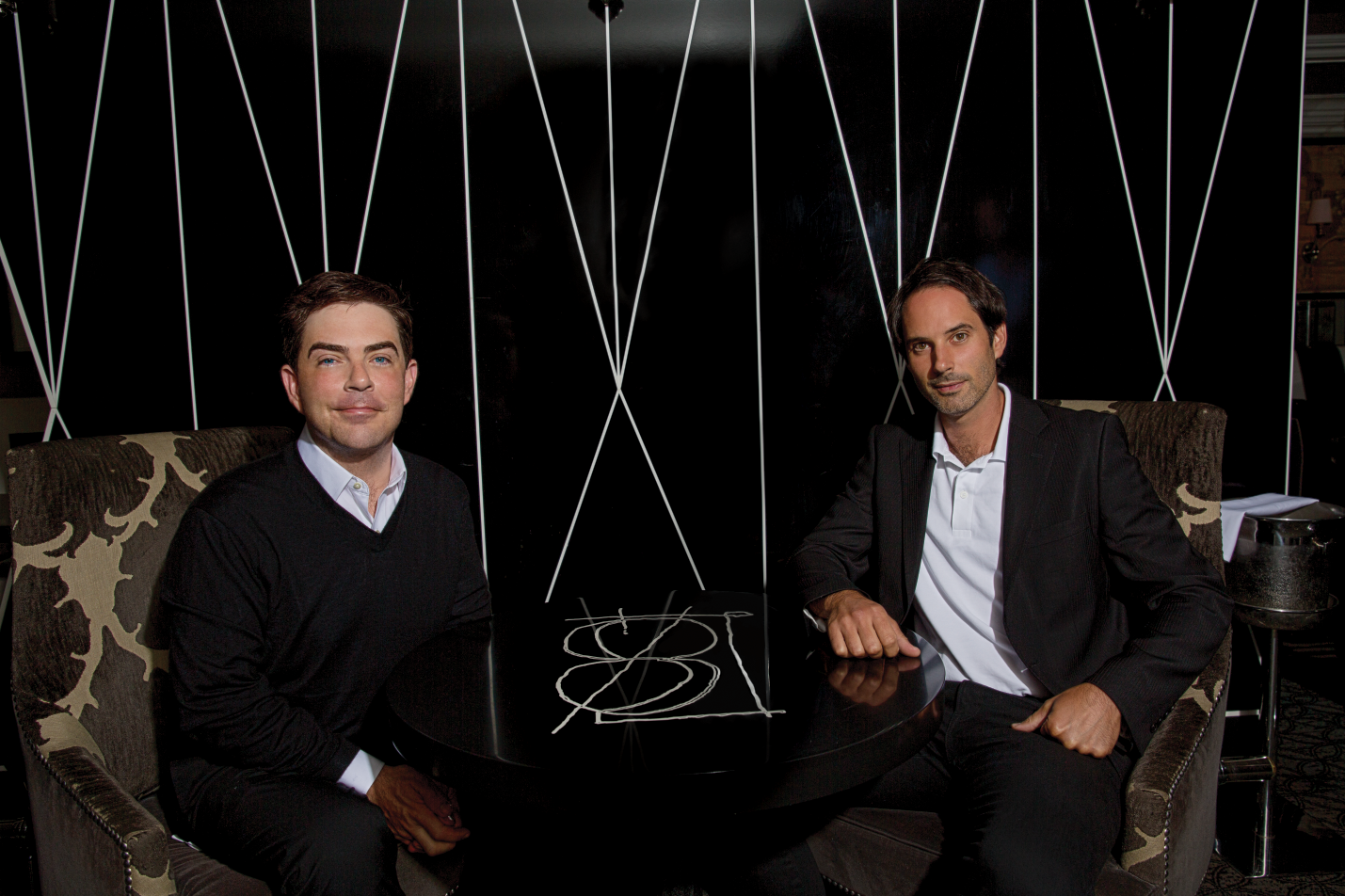 Fusing fashion, travel, and CBS star power, Watch! has been quietly redefining what an entertainment mag can be. EIC Jeremy Murphy and his aide-de-camp, director of photography Christopher Ross, took us out to Bar Pleiades at the Surrey hotel to give us the lowdown.
BY EDDIE ROCHE

How did you two meet?
Jeremy Murphy: Chris was working with Annie Leibowitz, and through a mutual acquaintance, we were introduced. He came in, interviewed, and we gave him the challenge of a lifetime. We were taking one of our actresses, Eva LaRue, to Paris Fashion Week in 2008. His hazing was that he had to produce the shoot.
Christopher Ross: I had to get them into all the shows. They gave me the wish list. If anything went poorly on this, it was all on me, and it went really well.

What’s your background?
Christopher: I went to Rhode Island School of Design with a major in painting. Unless you’re a trust fund kid, you can’t really be a painter in New York when you graduate. So, I worked at Lucky magazine in their photo department. It was a newbie type of thing for me because I felt like more of an artist, but I started getting really into it. After Lucky I went freelance for Annie and Details before eventually meeting Jeremy.

You’ve booked some incredible photographers for Watch!
Christopher: We’ve had shoots with Patrick Demarchelier—I think he likes working with us. We don’t get in his way and let him have a two-hour lunch. He’s just such a nice guy. We’ve also have worked with Ellen von Unwerth, who was so fast, creative, and so dialed into her assistants. I was blown away. Eventually Jeremy asked me if I wanted to do my own shoot for Watch!

Was that scary?
Christopher: Absolutely. I was a little hesitant at first—my job had always been producer.

Why does a TV-centric magazine want to dabble in fashion?
Jeremy: It gives us something completely different that no other entertainment magazine is doing. It gives us something exclusive and rarefied and glamorous. It’s easier to get top talent when you’ve got a great photographer. We shot at Cipriani in Venice and the Four Seasons in Florence. We’ve been really lucky. If we shoot with the right photographer, a lot of doors open.
Christopher: Jeremy has so many contacts at some of the best hotels around the world, and they love him. Word gets around that we’re a well-oiled machine.
Jeremy: I started as a travel writer and I know all the publicists at every hotel in the world. When we started at the magazine, nobody knew who we were, but I used those relationships to help get us in the door. We have our pick of the litter right now.

Where have you been off to lately?
Christopher: One of the big shoots we recently did was in Tuscany at Castiglion del Bosco with Christine Baranski.
Jeremy: Massimo Ferragamo owns it, and they extended an invitation to us. It’s like a village. I would say it’s almost a six-star hotel.
Christopher: It’s insane. Even the faucets were perfect. If you were going to renovate a house, you’d be really upset if you hadn’t seen this place. There were acres and acres of vineyards.

What’s it like shooting actors?
Christopher: They love being themselves. Christine was fabulous. She was such a pro. She’s old-school glamorous. She was up for anything. The only shot she was a little nervous about was when we put her at the end of an infinity pool.
Jeremy: Anybody would be! Chris is also very easygoing and open to feedback, so actors love him. Of all the actors he’s shot, Christine is so comfortable in front of the camera, and she’s got a body that you wouldn’t believe. She’s like a teenager!
Christopher: She’s such a happy woman, and that shines through.

Is it easy to get the actors do these shoots around the world?
Jeremy: It’s not as easy as you’d think. The actors are normally shooting the shows from mid-July through mid-April. We have a very small window with them. There are a lot of elements that come together from airlines to stylists. The stars have to align.

What’s your circulation?
Jeremy: 200,000. We’re very lucky. It’s also a major promotional tool. We license our photos through Corbis, and our video gets on Entertainment Tonight. We’re like a content incubator for other divisions. There are many purposes for the magazine.

You also have some really impressive writers working with you!
Jeremy: Hud Morgan, Kate Betts, Loren Chidoni, and Michael Musto, to name a few.

What photographers would you like to bring into the fold?
Jeremy: David Sims, Mario Testino, I’d love to work with Ellen again.

How receptive is the fashion world when it comes to providing clothes?
Jeremy: It depends on your stylist. It’s all relationship-based. If your stylist can get into the showroom, you can get anything you want. There’s no reason our magazine would be in the realm of Vogue or Harper’s Bazaar—we’re not a fashion magazine—but we’re incredibly fortunate that we have people like Chris Campbell who work on our shoots and play on that level.

What’s next for you guys?
Jeremy: We have our 10-year anniversary coming up. We did something in Monte Carlo that’s coming up. We took LL Cool J to Paris! We have a lot of fun stuff coming.

Who has the most frequent-flier miles now?
Jeremy: I’m going to say me!
Christopher: I’m a close second.

Who deals with jet lag better?
Christopher: Me! I’m younger!