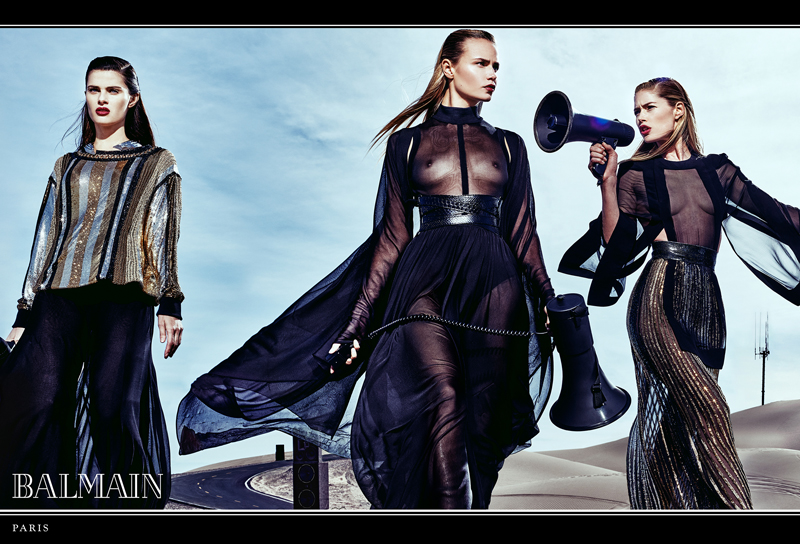 Balmain’s Spring/Summer 2017 campaign release hit our inbox today and, per tradition, along with it came Olivier Rousteing’s refreshing personal touch, where he gives a first-person account of his shoot experience. Shot by Steven Klein with creative direction by Pascal Dangin, the campaign stars Isabeli Fontana, Natasha Poly, Doutzen Kroes, Tony Ward, Gabriel Aubry, and Jon Kortajarena walking down an abandoned California highway sparsely lined with speakers. The Balmain army is decked out in the label’s latest designs, like a sheen orange jumpsuit, #freethenipple sheer tops, a few metallic numbers, and caped pieces that take off in a gust of wind.

“We may have shot this campaign on an early winter morning on an out-of-the-way highway in California—but for Steven, Pascal and me, it was important that these powerful images not be easily defined by a place, an hour or a season,” Rousteing wrote. “We capture moments of a mysterious journey of a diverse cast of models, a nomadic Balmain army forcefully moving through an oneiric landscape—an environment which, like the collection itself, has been stripped back to the essential.”

That essential, according to Rousteing, is music. “For me and my generation, music is simply inseparable from fashion. Those who know Balmain will recall that it has played a key part in the house’s previous campaigns—whether the focus was placed on today‘s artists themselves or on a shared creative collaboration with them. Here, the impressive towering speakers that line the mysterious pathway make very clear that ours is a journey that is accompanied with a powerfully invigorating soundtrack, blasting out at top volume, at every step of the way.”