Naeem Khan Says 'I Do' 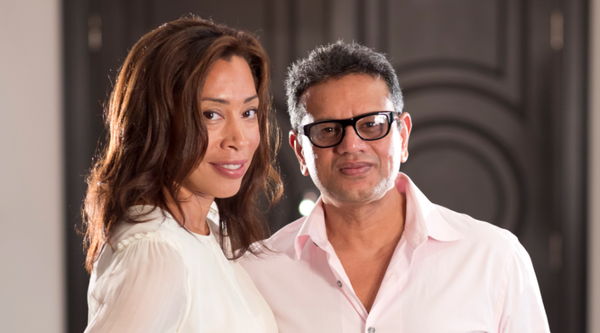 (NEW YORK) Naeem Khan’s otherworldly evening dresses have been celebrity favorites since 2003, but his entry into the wedding-gown game changes everything. Brides editor in chief Keija Minor sat down with the onetime Halston protégé as he prepared to take the big plunge.

KEIJA MINOR: So, tell us, who is the Naeem Khan bride?
NAEEM KHAN: She’s a woman of the world. She’s a power player. She knows how to make a statement. I’m known for embellishment, and my wedding dresses are going to have very intricate embroideries. That can overpower certain women, but my bride is not afraid of it. She’s going to flourish in it.

How did you approach designing your first bridal collection?
I wanted it to be sleek, to be just enough A-line. I also wanted to get away from the big, froufrou kind of wedding dress. I looked back at a lot of our biggest red-carpet hits for inspiration. After all, this is a bride’s red-carpet moment!

What made you decide to launch a full collection now?
I’ve wanted to do bridal for a long time, but I was not ready. My company was expanding like crazy, and you have your ups and downs in business. But now we’re in a really good place and I feel ready. I also got a big push from my very dear friend Akxeeta Patel, who just left Neiman Marcus. She was actually my first girlfriend!

Can you tell me about your debut collection?
The collection is designed for three different women: the city bride, the bride who’s getting married by the beach, and the bride who is going to be in a garden. For the city bride, the designs are angular, modern, sharp. The aesthetics are simple. For the garden bride, it’s floral, incorporating leaves and petals. For the beach bride, we kept things airy and used elements from the sea, like kelp and shells, as inspiration.

How did dressing the first lady for the first state dinner affect your business?
It made a big, big, big impression. The number of people who were all of a sudden aware of the Naeem Khan name just exploded. We’d only just set up a Facebook page, and our number of fans doubled overnight. We were the third-most-Googled search term that day. Even in the little village in India where I was born, it was headline news. There’s no other woman who can have an effect globally like she did.

You’ve dressed many celebrities—Beyoncé, Eva Longoria, and Emily Blunt, to name a few. Of all the dresses you’ve done for the red carpet, are there any that you think of as iconic?
The silver dress we did in 2011 for Rosie Huntington-Whiteley for her Transformers premiere was a huge one for us. Every one of the sequins is a different shape, so it looks textured. More recently, the fringe dress we did for Sarah Jessica Parker to wear to the Serpentine Gallery party in London this summer was a big one.

And you designed the dress for Matt Damon’s wife, Luciana, when they renewed their vows in St. Lucia.
Yes, it was important that the dress be aesthetically and environmentally correct for what the wedding was. We wanted it to be chiffon—light and airy. After the wedding, Lucy had her shoes off—we were partying until, like, three o’clock in the morning—and the dress still worked. They are dear friends of mine. I can’t believe I cried; they’ve been married for, like, eight years! I mean, really? Why did I have a tear in my eye?

I think there’s something about weddings that makes you super emotional.
They really do. So, it’s the same thing with creating these dresses. In my head, I get a little choked up and emotional about these clothes.

How many dresses will you have in this first collection?
I’ve designed about 35, and we’ll narrow it down to 20 to 25 for the retailers. For the presentation, we’re showing between 12 and 14.

When did you start designing the collection?
About four months ago, while I was working on my ready-to-wear collection. I live in a bubble when I’m designing. I live, breathe, and sleep the collection. You’ve been married for 33 years.

Did you design your wife’s dress?
Of course! Well, we had two weddings.

Why two?
The first one was against my parents’ will. They didn’t want me to have anything to do with Ranjana. At that time, an actress or model was not looked upon as the woman you should marry. I was 19 when I met her, and she’s three years older than me and was the number-one model in India. I asked her for a date—and she said no. But later, when I was living in New York, she came to the city for a holiday. That was during the crazy Studio 54 days when Liza Minnelli, Warhol, Halston, and I would all hang out together. Ranjana came out with us, and she never went back to India. She started living with me, and I didn’t tell my parents. It was a big secret.

And then you moved to L.A. together?
Yes, I quit my job with Halston, and we moved. Then one Thursday we said, “Let’s get married this weekend. How do we get married?” We didn’t know, so we pulled out the Yellow Pages and found a chapel on Wilshire Boulevard that would marry us that Sunday. It was just the two of us and our friends. They all dressed up. Most of our friends were gay, and some came in drag, like 12 of them.

And then you had a second wedding?
When I told my mother that I got married, she didn’t speak to me for six months. Eventually, my uncle called and said my mother was ready to talk and she wanted me to have a wedding in India. So my parents had a big wedding for us with 2,000 people, and I designed Ranjana’s dress.

If you were not designing, what would you be doing?
I’d be an architect or a chef.

Do you cook?
Yes, the other day I was having Queen Noor over for lunch, and I thought, “What do I make for the queen of Jordan? I bet she never has pizza.” So, I made pizza from scratch.

You’ve dressed her, right?
Yes, many times. She’s super elegant, a woman of the world.

What would you like the retailers to know about your collection?
For me, it’s about technique. I’ve been making clothes for various shapes and sizes and people from different walks of life for 30 years, so the fit and shapes of my dresses are very studied. All the embroideries are handmade. We’re not buying fabric and then cutting and sewing it; we are creating our own fabric. It’s a total obsession. Wherever I am, I’m always thinking of what stitch to use, which gauge of thread to use when sewing the beads, because if you use a certain millimeter of thread to sew the beads, the garment becomes stiff. Also, we have our own factories in Mumbai, so delivery time will be between eight and 12 weeks.

The first factory was started by your father, right?
Yes, it’s a family business. I’m the third generation to work with beading and embroidery; my father and grandfather did as well. We employ 2,000 people to do the handwork. Almost 900 work on my collection alone, but we also do work for several couture designers. That’s how I started working for Halston. My father had come to America to build his business, and I accompanied him to a meeting with Halston. He offered me a job on the sp
ot.

In how many stores do you plan to sell your collection?
In 20 to 30. We want to make sure it’s in strategic places, and we want to keep it exclusive. Then we will make our moves accordingly.