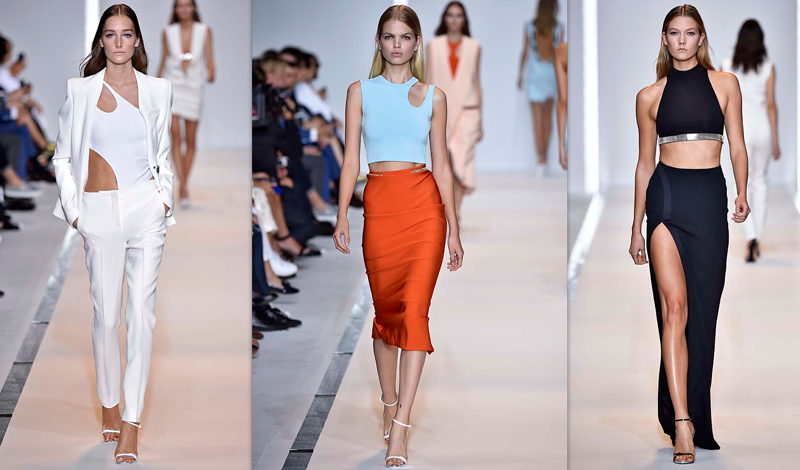 David Koma debuted his first collection for Mugler in Paris this season: an array of sexy, clingy numbers perfect for the women perched front row at the show, like Carine Roitfeld or any of the four Clarins sisters. Koma, a Central Saint Martins grad, has been designing clothes since the tender age of 13, when he entered a design contest with just three pieces. Fast forward to 2014, and the 28-year-old is not only designing his own eponymous line, but also that of the storied French house first created by Thierry Mugler in 1971. So, how does he feel about his new role in the limelight? “It’s incredible,” Koma told The Daily backstage. “I’m extremely happy about everything; to be able to work at this incredible house as the artistic director is a privilege. I do my job with pleasure.”

Koma follows in the footsteps of Mugler’s former artistic director, Nicola Formichetti, but this season he decided to begin with a “tabula rasa”. That meant a collection of simple, minimalist pieces infused with plenty of sex appeal. There were chrome-embellished tear drop cut-outs on the shoulders, generously-scaled cut-outs on the hips, sky-high slits, plunging deep-v’s at the necklines, and partially sheer tops that revealed plenty. Ooh la la! The pieces sizzled on top mods like Karlie Kloss, Jessica Stam, Daphne Groeneveld, and Joan Smalls, whose famous frames were accentuated by sleek lines and flesh revealing cut-outs. If Koma was nervous about his debut, he wasn’t showing it as he tirelessly fielded questions from a slew of reporters and film crews backstage. “With the team at Mugler, I knew that we could do it,” said Koma. “When you have a beautiful team, you feel comfortable.”

Designer Garb Goes Mobile With A New App From Shop Hers