Movie Night at the MoMA 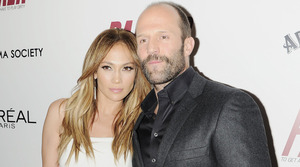 (NEW YORK) The bad boys turned out on a wickedly chilly evening for The Cinema Society and L’Oréal Paris’ screening of Parker, director Taylor Hackford‘s new action film starring Jason Statham and Jennifer Lopez. The diabolical crew included Micah Hauptman, Michael Chiklis, Wendell Pierce, Clifton Collins Jr., Emma Booth and Patti Lupone (plus a noticeably absent Nick Nolte). What’s the most gangster thing about perennial badass Statham? “My suits!” he told your Daily. Before we could find out who he was wearing, Statham was squired away by his publicist after another reporter asked his position on gun violence. Meanwhile, Lopez dominated the red carpet in a white strapless, peplum-trimmed Lanvin cocktail dress with Tom Ford heels. How is the reported diva to work with? “She’s really lovely. She’s wonderful to work with and loves acting and doesn’t keep to herself at all on set,” said co-star Hauptman. Quelle surprise!

The premise for this tough guy film? A thief with morals. Based on the late Donald E. Westlake’s best-selling books, Parker is a villain who never steals from the poor and only harms those that deserve it. Then, he gets involved in robbery gone bad when his fellow crooks double cross him. Thinking they’ve killed him, the thieves, played by Chiklis, Pierce, Collins, and Hauptman, make off to Palm Beach for a heist to swipe millions of dollars worth of estate jewelry at an auction. Parker, played by Statham, shows up to take them down with a little help from local real estate agent, Leslie Rodgers (Lopez). Like all good action heros before him (i.e. Stallone, Schwarzenegger), Statham takes them down and rescues Lopez, the damsel in distress. But in this flick, the good guys keep the stolen spoils.

Post-screening, a swath of the crowd (which also included Nicole Miller, Rosie Huntington-Whiteley, Hannah Bronfman, Nicky Hilton and 50 Cent) braved the blistery weather to head to Marquee (less than a week into its revamped reopen) where cocktails from Appleton Estate bore names like “Parker” and “Palm Beach.” The result? Some libation-addled warming up that probably made everyone wish that they were, in fact, in Palm Beach.
PAIGE REDDINGER

These Are So Much Cooler Than Cabbage Patch Kids…