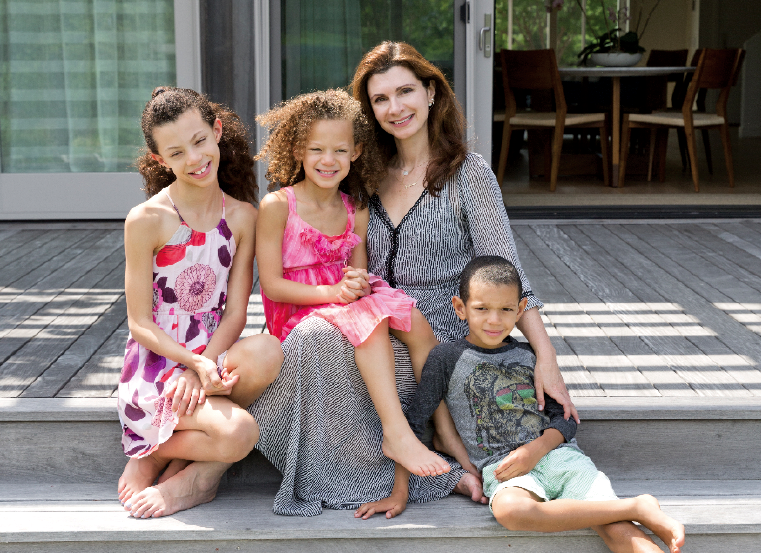 Another morsel from The Daily Summer! For accessories designer Monica Botkier, weekends at her family’s three-pronged home in Bridgehampton are an opportunity to live the good life.

How long have you been coming to the Hamptons?
Since I was 11. My best friend’s family had a home on Shelter Island’s Shell Beach, and I spent the entire summers after 7th and 8th grades there. Shortly after that, my parents rented a house, and then bought one. We were always very artsy, spending time outside, listening to moody music, and watching moody skies.
What’s the story behind your home in Bridgehampton?
It’s the same house my parents bought when I was 15, and now it’s been expanded and redesigned to accommodate my family and my sister’s family. It’s like a three-winged house that we all share. It’s cool because that’s what summers are about—the family all getting together.
Are you surprised by how much Bridgehampton has changed over the years?
Yeah. In my early twenties, I threw some serious ragers, and my parents were pretty cool with it. At the time, there were potato and corn fields everywhere—there weren’t really any homes near us. Every year, more and more are built. It’s different now, but the sun, air, and sky still have a beautiful, calming feeling.
How much time do you spend here?
We come out every weekend starting in June, and we take two weeks in August. I send my kids to camp here. They get bored after two weeks, so we switch them up.
Any other rituals?
We do pool time right after breakfast—they just strip off their pajamas and jump in. We generally go to the beach after lunch. My sister and her husband have a boat in Sag Harbor, so we do water sports like tubing. When the kids go to camp, I try to do something physical, like a FlyWheel or yoga class. I also try to catch up on books and see friends in Amagansett and Montauk.
What’s on your summer reading list?
I’m in the middle of about 12 books. I want to finish How to Hug a Porcupine, an instructional book on raising teens—my oldest child is 10 and a half. I also want to read the novel by Lucy Sykes and Jo Piazza, The Knockoff, but first, I need to finish Diana Vreeland’s biography.
Any favorite summer recipes?
We grill a lot, so I do BBQ chicken with a lot of healthy oils, cumin, and honey. My sister does a really great soft-shell crab and corn and avocado salad. We try to bake pies, too, but we often drift over to Harry’s Farm, because theirs are insane.
Do you have any favorite beaches?
I would say Mecox Beach right by us in Bridgehampton, especially with the beach and the bay, because they connect so it creates a little lake for the kids. Atlantic Beach in Amagansett is a great beach. Montauk’s fun too, but I’m not a surfer. It’s fun to go out there and watch people surf every once in a while.
Do you have Hamptons-centric pet peeves?
People take themselves very seriously, and it’s not as chill as it used to be. I don’t really go out to eat very often because I really like to cook with the family, but it’s also insane with the traffic, lines, and reservations. I just want to go with the flow, but those things are impossible with the density of the people. When I was way underage, I used to go to Bay Street and see all these great reggae bands, but those kinds of things aren’t around anymore.
What’s your go-to summer bag?
Our Soho tote, which has been a huge hit. It’s very lightweight and raw, so it shows off the beauty of the leather. I throw everything in it—it’s great for shopping. For the city, our Warren backpack is really great. You can also rearrange it so it works as a shoulder bag.
Your company has gone through some major changes in the past year.
Yes! I created and owned Botkier independently for 10 years. Two years ago, Botkier was acquired by Showroom35, which has provided so much support and given Botkier so many opportunities. We operate as a brand with a strong heritage, and we are going through a rebirth. It’s been a very exciting time for us, and we can’t wait for what’s to come!
When you launched in 2003, your Trigger bag was a runaway hit.
We like to say it launched an industry, because we feel like it was a cornerstone for contemporary handbags. It was really a phenomenon—all these women were finding me, from the Condé Nast building to the middle of Ohio. It had a five-year run, and then we put it away for a few years. We just brought it back, and the timing couldn’t be better. We reimagined it a little bit, introducing it in five different silhouettes—think Hobo style, cross-body, zip-around, and others.
How often do people mispronounce your last name?
All the time! They want to give it a French inflection, but it’s really Russian!