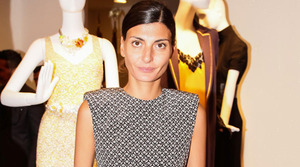 (NEW YORK) Another NYFW encore-worthy feature! With a coterie that includes Anna Dello Russo, Franca Sozzani, and former flame Vladimir Restoin Roitfeld, well-connected stylist Giovanna Battaglia knows what really goes on set and backstage. So what’s it like working for icons like Carolina Herrera and being mobbed by photogs for your unique sense of style? BY EDDIE ROCHE

Where did you start?
I started as a model for brands such as Dolce and Gabbana. I became a stylist in 2003. I ended up freelancing with my friend Anna Dello Russo, who got me a job as an editor at L’Uomo Vogue, so that was my first big thing with Condé Nast. At one point I was working for Chinese Vogue, German Vogue, and Vanity Fair. Franca (Sozzani) eventually gave me the fashion director position, which I did for two years until I decided to move to New York. I thought if I wanted to freelance, this was the city to do it in. I had been going back and forth for 10 years.

Did styling just come naturally to you?
My family is very artistic and fashion was kind of… not a good look to be in. It’s not seen as intellectual. But I told them I could make it work. When I was a model, I questioned should I be a designer?, should I be this?, and then while working I met Charlotte Stockdale. She was the one where I said, “I want your job!” And she told me, “I think you should have my job.” She gave me the push, and I started. Anna was the one that believed in me and got me the job, but the real first person to say I should be a stylist was Charlotte. It was not the same profession back then. To explain to my mom what I was doing took five years. Then when she got a copy of Vogue, she understood. Before she was like, ‘What are you doing?’

How did you explain it to her?
I compared it to art. I was putting together a gallery with clothes instead of art. When people outside don’t understand, you say you’re a director, you pull together the photographer, the models, the clothes, the concept, and you put it all together. It’s a very hard thing. This job is not easy at all. It’s very intense.

What are the hardest parts of the job?
The hardest part is when it’s Fashion Week and you’re really, really tired and you need to attend events. Some of them are nice but… I’m kidding. The hardest part is when you’re on a shoot on location. We had a shoot in Russia once, and everyone flew in from all over the world for it and there were location problems, weather issues, the makeup person got sick. You have to keep everyone together. The shoot is all on your shoulders. It’s not just putting on a nice dress and taking a picture. It’s way, way more than that. It’s still very satisfying.

You’ve styled Carolina Herrera’s show…
I adore her! She is amazing and my style icon. I wish I could be her one day. She matches her bracelets with her cashmere sweaters, and to be so kind…

You also work in Milan, but what about Paris?
No, no, no. I cannot do overloading. In Milan and Paris, you don’t show up as much before the show as they want you to show up here. In Paris, it’s more behind the scenes. It’s about the designer. In New York, the stylist is the superstar. I think the stylist should be in support of the designer and step back into the shadows. Otherwise it’s a power game.

What are your doing backstage, exactly?
Every designer is different. They all have different needs. Maybe one wants you to take off the belt on a look, while the other wants you to style the entire collection. New York and Milan are very different.

Does that stress you out at all?
Of course it’s stressful. Every time you think you’ve handled every stressful situation, you run into new problems. I’m trying not to stress so much but I do so much, that it is a part of it. Stress is part of the job, but it is fun. With Carolina there is no stress at all. She likes to work in a peaceful environment. Other designers work in stressful and terrifying environments. I try to work with people I like. When you are so close to the clothes, it translates who you are and your mood and it affects what you put together. There are so many ways to style a shirt, and it will look completely different based on your mood. This is what I do.

The stylists are becoming celebrities in the industry.
I could be a model if I wanted to. It’s been requested. I’m a fashion editor, not a model. I did something for Eddie Borgo because he was close to me. It has to make sense. I’m not a blogger. I make a difference with my work. The job of a blogger is to take pictures of themselves wearing fashion. But it’s about them. I like to share my looks sometimes on Instagram and Twitter because it’s fun, but it’s not the core of my work.

Shot Of The Daily: Swimming With Stella McCartney