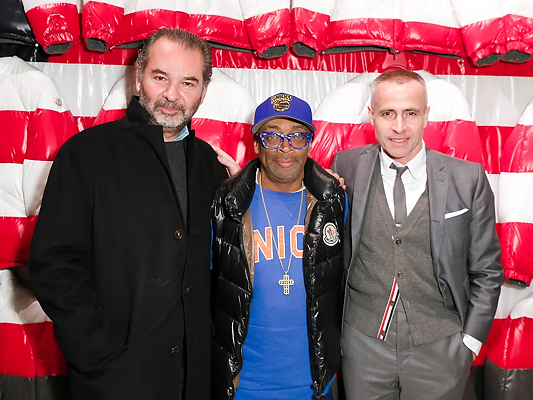 Moncler opened the doors to its brand new boutique at 650 Madison Avenue, its largest flagship in the world, to a very packed house last night. The boutique, like all other Moncler brick and mortars, was designed by architects Gilles & Boissier. It was all stars and stripes, apropos for a time when patriotism is top of mind. Moncler made its salute to NYC with an installation of the brand’s iconic puffer jackets in an American flag motif. Designed by Thom Browne, 28 one-of-a-kind jackets hung on the wall to create the flag. Each jacket sold will benefit Robin Hood, New York’s largest poverty-fighting organization. An entire collection, beyond the limited-edition jackets, will feature the stars and stripes pattern in jackets, cashmere sweaters, and other special items.

To celebrate, acclaimed director Spike Lee was tapped to create an homage to America and New York in a short musical film titled Brave, which stars dancers Lil Buck, Jon Boogz, and Damaris Lewis. “I met some of them through an Off-Broadway musical called The Total Bent at the Joseph Papp theater,” Lee told The Daily. “And I met Damaris the last time I saw Prince, because she danced with Prince, and I knew everybody else so it was just an opportunity to get friends together and just have some fun.” The film begins with Lee reciting the sonnet “The New Colossus” by American poet Emma Lazarus, which is inscribed on a bronze plaque on the pedestal of the Statue of Liberty. The film proceeds with the characters dancing through the streets of New York to the tune of the song “Brave Suffering Beautiful.” Ato Blankson-Wood (also from The Total Bent) performs the song with his powerful star-in-the-making vocals.

Meanwhile, around the corner, 5th Avenue was lined with barricades surrounding Trump Tower, giving this project a whole new meaning for Lee. “Many people have different attitudes towards what patriotic means, and my patriotism is very different from the President Elect’s,” Lee told The Daily. “I think this film is what demonstrates what makes America great, which is diversity. It’s about people coming together. It’s about not trying to ostracize people, vilify people, or kick people out. Now [Trump] says he’s going to build fences in some places…get the f**k outta here! Oh, and here’s the thing…he says he has a mitigated goal that he’s going to force Mexico to pay for it. I mean, how do you do that?”

His advice for those disheartened by the recent election: “I think everybody has to be really vigilant,” said Lee. “If people were asleep, their ass definitely woke up the next morning. They got woke. Shit is serious…serious. The man has the nuclear code. He could start a nuclear war by pressing some digits on the football, as they call it. And if you look at his recent appointees, they’d be like ‘Do it! Do it! Do it!’ People would say, ‘But what about the children?’ and they would be like, ‘F**k that, let’s blow the whole thing up!’ God help us.”

Some other advice for the disheartened? While some might be awaiting the apocalypse, give back to a good cause in the meantime by shopping Moncler before the Snowpocalypse. 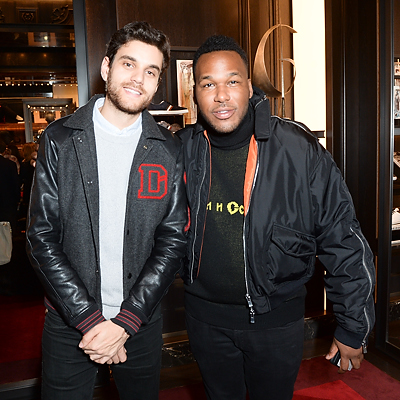