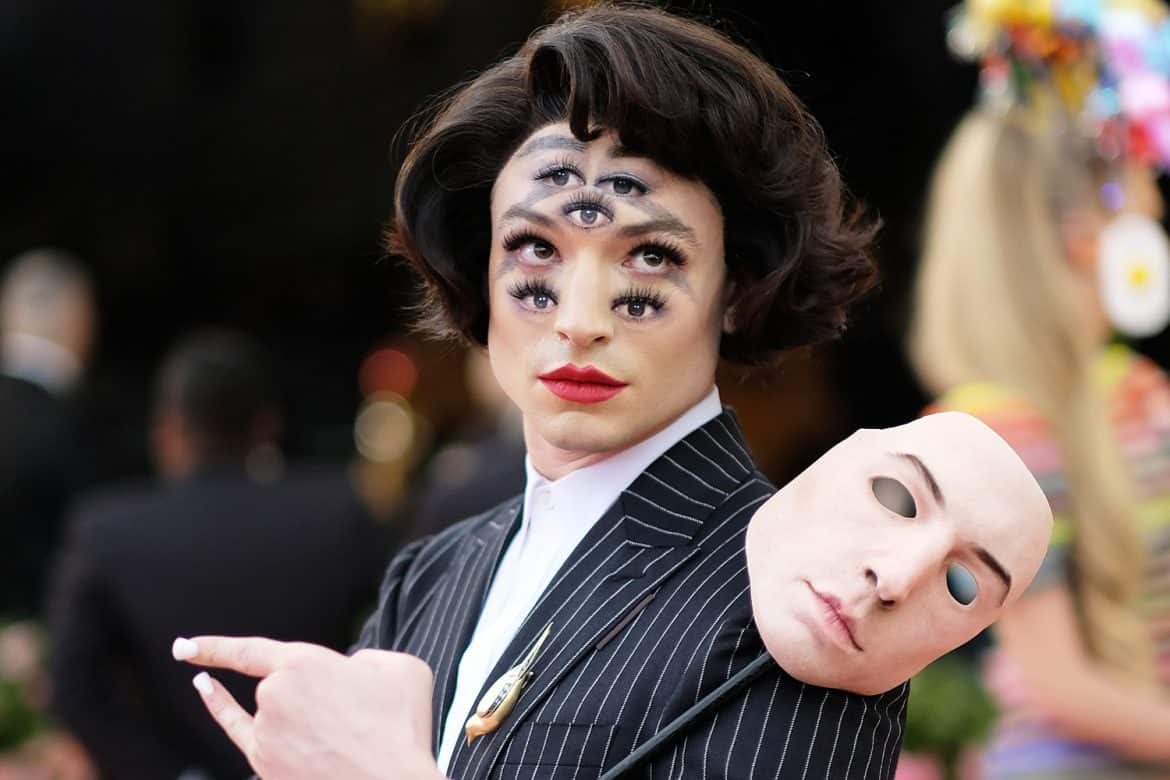 Last week, Ezra Miller was the toast of the red carpet at the Met Gala with a dizzying beauty look that featured five extra eyes (and corresponding brows). It was all thanks to Mimi Choi, a makeup artist who specializes in mind-bending optical illusions. Her skills are so jaw dropping, it’s almost hard to believe she’s only been doing makeup professionally for the past five years. The Daily caught up with Choi to find out how she accomplished Miller’s look, and why baking and contouring might not be for everyone.

Did you get to enjoy any Met Gala festivities last week?
No, it was just work. I was touching up and stuff like that. Mostly just making sure that Ezra was ready for whatever event that they were going to. That makeup had to last over 24 hours. Pretty much all day I was just trying to keep it fresh and looking good.

What kind of touchups does a look like that need?
The eyes are pretty stable. I have quite a bit of experience doing illusion makeup, and I know how to use products to make it last for a long time — for over a day. Every [red carpet] photo is HD. And they might sweat because of their outfit and everything, so I had to be extra careful and set it really well with a sealer. I was pretty much just touching up the lips, because they were talking and eating a lot. I took a video of the makeup at 2 am and it was still looking pretty fresh. We did it at 4:00 in the morning the day before.

How did you come up with the look? Did you know what Ezra was going to wear?
They called me about this concept before we met. They did send over photos of the outfit and the mask and everything. Apparently Ezra has been looking at my Instagram for a while, so they had a couple of ideas about what they wanted. And one of their ideas was the kaleidoscope eyes that I’ve done in the past, which actually I had in mind as well. I thought it would be fitting for the theme because if they’re going to wear a mask that’s exactly like themselves on the front, wearing those eyes behind it could represent that every human being has many different sides, and we’re revealing to the world different sides of us and we’re not ashamed of it. Ezra agreed with that. Eyes have also been my signature and also they’re easy to photograph at all angles and it looks really impactful, because it’s not angle-dependent.

How long did it take you to get to the point of making a really realistic eye?
I’ve been drawing eyes for a long time. Eyes have always meant a lot to me because it’s the illusion that jump-started my career in 2014 when I first explored blurry-face makeup, which is multiple features on the face. At first I was inspired by motion-photography — you know when people are running and when someone captures it, it looks like there’s 10 people running? It looks really blurry. In the beginning when I was drawing eyes it was not nearly as realistic as it is now. Each time I paint an eyes I want to make sure that I capture a little bit more detail than the last time. With every makeup job I try to improve. I remember when I first posted that image it was my first 6,000 likes on an image. That was a lot on an image for me four, five years ago!

In what ways has social media helped your career?
Five years ago I started documenting my work on social media. At that point I wasn’t really looking for fame. If I got followers it was a bonus to me. But it was just really a way for me to document my growth as an artist. I had no art background, so for me it was just looking at my work to see if I’ve improved. Social media definitely has brought me a lot of work opportunities. It started from features on makeup company’s pages. That snowballed into getting calls from magazines to do photoshoots. Then from that I got a lot of requests to teach master classes and workshops all over the world — which I really enjoy because I was actually a preschool teacher five years ago. I have a background being an educator, so combining both passions has been great.

How did you get into makeup, and specifically the kind of illusion makeup that you do?
I realized I wasn’t completely happy [as a preschool teacher]. At age 28 I decided to explore other passions. My family has always seen that I’ve been interested in art, but I never really had any art background other than elementary or high school. My mom said, “Why don’t you take some time to learn how to paint professionally? Or even do makeup?” I actually had experience doing bridal makeup for family and friends. It had been an interest of mine, but I never really explored it. So I did some research and decided to go to makeup school, which changed my life completely. About a month into my program I started exploring creative makeup.

What was the first illusion look you ever did?
I remember using two eyeliners — a black and a white eyeliner — to get the illusion of the face being cracked. I posted it online and it went viral on Pinterest. People were recreating it and everything. That definitely motivated me to keep exploring that style. At that point illusion makeup wasn’t even really a thing, it was just something that I enjoyed. I didn’t know where I was trying to go, but I just liked creating things that looked different. I thought if I could do good illusion makeup then I could do pretty much any kind of makeup (bridal, glam, or winged liner) easily, because illusion requires so many details.

What inspires your work?
I create my art according to my emotions. It’s inspired by my fears, by my surroundings and everything.

How do you usually start planning your concepts out?
The most that I would do usually would be notes. I write like a word or two to remind myself of that thought, of that vision that I have. Whenever I feel ready to paint I just look at that word and I just paint it directly on the skin. I usually have a mental image of what I want it to look like, but a lot of times it turns out to be different. I don’t mind it. Spontaneous art is the best.

What are some of the most challenging aspects of what you do?
Time and patience. My makeup takes a long time, but I hope that I will gain more patience in the future. Right now my tolerance level is about 10 hours. My biggest makeup look took maybe 10 hours, non-stop. I feel like I could do more intricate work if I could be more patient with myself. If I have a lot of time I tend to achieve a lot more. But right now I have to stop after 10 hours, I’m just too tired.

Are there any ideas you haven’t been able to nail yet?
There’s always room for improvement. I wouldn’t say I’ve nailed any. I’ve attempted a lot of things in the past five years. My goal is just to keep aiming to nail those techniques, but… I would say that I have not nailed any technique [yet]. It’s a constant work in progress. And I think that’s what makes me grow. I’m never happy when I do, and I want to constantly improve and work on it.

Are there any trends you really want to see go away?
I don’t think there’s any particular trend that need to go away completely, but I hope that people understand that heavy highlights, contouring, and baking is not necessary for everyone. Trends are fun, but it’s important that it suits the occasion and what kind of face shape [you have], and what kind of skin type. Just because baking is popular doesn’t mean that everyone should bake. People with textured skin, dryer skin, or aged skin should not because it ages them. So instead of following trends, just find what works for you.

Condé Nast Sells Another Title, Kim Kardashian Gets Into the Bridal Biz