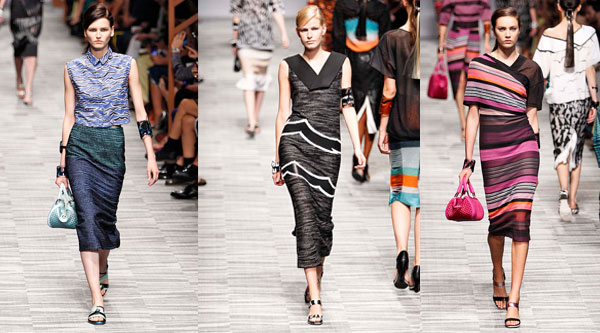 (MILAN) Missoni
Entering the Missoni show this season through a giant courtyard, where children innocently played games and were amusingly unmoved by the fashion circus that circled around them. Upon entering the space, editors were seated amidst giant wooden zigzag structures by stage designers AAAHHHAAA (oui, that is indeed the name) that carved out the shape of the runway where the audience was treated to “A pop’n’xotic fantasy”. Such was the theme of the Missoni show this season. What exactly does that mean? That classic Missoni zigzag pattern got treated to plenty of Japanese influences in big, bold colors. But if you are thinking of some of those classic Missoni knits, think again. Spring was about a cool new take on the brand’s traditions so it’s fitting they looked East this season to a culture, simultaneously rife with new ideas yet steeped in tradition. Models walked at an extremely fast pace in looks like a water print silk crêpe sarong with flying seagulls paired with a crop mesh knit jacquard top, which sported a re-imagined brand logo print. Also hitting the catwalk? A black duster cardigan with the a logoed jacquard twill paired with a white button down and cornflower blue lacquered rayon pants. Lacquered rayon also popped up in bright orange and blue zigzag pencil skirts for an alternative to the onslaught of leather and PVC. There was asymm draping in a earth print one-shouldered pink, purple, and black silk dress, plus plenty of Missoni stripes in kimono tops, skirts, and re-imagined in dresses made from dégradé fringe bands. And we must mention the hair pieces by coif master Eugene Souleiman: straightened strands of hair attached to plastic circles, hung from buns. Overall, a fun and energetic showing. Angela Missoni ventured to far-flung destinations this season and we want to be right there with her.

Salvatore Ferragamo
It was all about tailoring, volume, and the contrast between straight lines and curves at Ferragamo’s show yesterday. It wasn’t about color or florals, the latter of which we’ve been overdosing on a bit this Spring. The looks were clean, done in mostly nudes, camels, and whites with just a touch of black and navy at the end to focus on the cuts. Suit jackets were cut off to reveal the midriff while the bottom half remained attached to the pants as a sort of skirt, assym belted skirts revealed pleating underneath, and a pinstripe cream dress came cut like a sleeveless double breasted suit with pleating and folds at the skirt. A standout was a nude leather dress that was essentially a trench, a moto-jacket, and a pleated skirt all in one. Speaking of which, the trench coats and jackets were particularly stellar like a green, blue, and brown snakeskin coat that screamed of luxury or a short nude leather jacket that was a classier take on a moto-jacket with clean lines and that boxy stiff look that is the trend du moment. And let’s not forget about the shoes! That’s where the brand’s roots lie, after all. Ladies will be lusting over those two tone knee-high open toe python boots, which also look uber chic in white and nude for those looking for something with equal statement factor, but a bit more toned down. There were plenty of looks here that the sophisticated non-flashy Ferragamo customer will find appealing.

Teresa Maccapani Missoni on Her Plus Size...