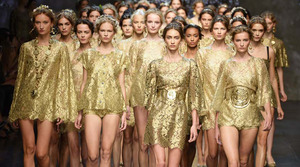 (MILAN) Dolce & Gabbana
Gold, gold, and more gold! At Dolce & Gabbana’s much anticipated show (and very exclusive, at that, as the invitations had barcodes and ID was required at the door) the designers delved back into their Sicilian gold mine, which has been giving them so much inspiration in recent seasons. This time, it was the ancient Greek influence in the region as images of ruined pillars were printed onto dresses and skirts. Giant, antique gold coins were printed onto black flouncy dresses and skirts and worn as giant medallions on belts and necklaces. Of course, there were also the label’s requisites: sexy see-through lace dresses and luxe fur dresses, tops, and skirts in emerald green, cobalt blue, and turquoise. Another motif: cherry blossom florals, which mimicked the trees in the set design and felt fantastically romantic, attached to flowing dresses and as prints on coat dresses—or, in one case, printed on a lime green PVC pencil dress. The designers also looked to Fellini films. We caught up with Anna Dello Russo later in the day, who donned one of the brand’s Sicilian-style dresses for one of her many outfit changes. “I loved it. It was golden, romantic, and very Fellini-ized. Also, the music was by Fellini. There were archive Fornasetti prints mixed with gold coin accessories,” said Dello Russo. “It was the best of Italy.” We agree. The collection was a bold statement by Domenico Dolce and Stefano Gabbana in what’s been a rough year for the duo. The finale ended with every model in the show walking out ensemble in a shower of golden designs. It was exquisite and extravagant. We have to hand it to the pair for not holding back. Bravo!

Marni
It was quite a fashion moment chez Marni this season. Editors crowded around the doorway and spilled onto the street awaiting entrance to the second showing at Viale Umbria. That includes even the biggest names, like Anna Wintour, who was spotted standing outside looking for someone to usher her in past the fashion plebians. In no less than five minutes, she was promptly whisked away, taking Lucky’s Eva Chen and Alexis Bryan Morgan with her as the rest of the crowd lingered outside. Once guests entered they were treated to coffee in the courtyard and then ushered into a big space with salmon pink hued sponge-y floors (akin to a basketball court) with white stripes.

After the chaos, what ensued was a moment of silence…literally. Technical difficulties with the sound forced the show producers to send the models out sans music. The only soundtrack? Photographers’ shutters snapping. The effect was surprisingly stunning. “It was very zen,” said Anne Fulenwider when we caught up post-show. That sentiment was echoed throughout the day as we heard other editors remarking on how they felt they could focus on the clothes more. The models post-show were more ecstatic than frazzled. “I think it was unusual and special,” said Lera from Next. “It was so powerful. There was no distraction and all the eyes were on the clothing. It was like a new innovation statement,” said Paulina King of Women, who closed the show.

So what about the clothes? Plenty of volume happening there! The jacket of a white pant suit came with piles of ruffled fabric at the bottom, bustles normally seen in the back of a skirt were moved to the front, and florals were done not as prints, but as multi-colored piles of fabric that looked like tissue paper collages, perhaps, or the dotted brushstrokes of a Monet come to life in 3D. The latter came in a bandeau crop top and pencil skirt. However, the look was more Japanese than French, and there were plenty of the brand’s signature work with prints. A matching Japanese floral pencil skirt suit looked like a riff on a Geisha kimono, and a forest green sarong and a heather grey swing skirt were folded like origami. All looks were paired with platform flip-flops like traditional Japanese Getas. While there may have been no background noise, there was plenty to buzz about in the clothing.

Ken Downing Gives His Take on the...