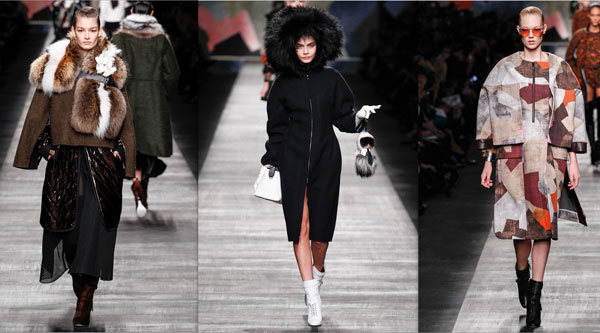 (NEW YORK) Fendi
Cara Delevingne opened the show for Karl Lagerfeld‘s Fall collection for Fendi wearing a black coat with a fur hood encircling her face as she daintily held a furry charm made in the Kaiser’s likeness. We imagine that will be one of the biggest sellers in this collection, but it’s not just Karl in fuzzy form that will have Fendi fanatics rushing to the stores. The belted fur stoles will certainly be a hit, as will the floor-length minks that came adorned with fresh orchids, which were said the be an ode to jazz singer Billie Holiday. A bubblegum pink wool anorak coat with a fur lined hood stunned; arty boxy shirts paired with long skirts and the zippered color splattered coats painted a powerful picture. And how about those sneaker boots? Karl’s love affair with casual footwear done with a twist continued from his Paris couture show for Chanel, where he showed models clad in luxe attire and running shoes made of lace. Sneaky Karl…he always knows what we want before we do!

Ports 1961
New silhouettes are always a breath of fresh air, and Ports 1961 offered up few new shapes to consider. A simple jacket got a refresh thanks to chubby fur sleeves and a warm neckline, classic white shirts were given peek-a-boo necklines, and overalls sported a sleek new look. That’s not to say that Fiona Cibani stuck to her minimalistic roots; the color ways were a muted palette of B&W, interspersed with grey, brown, and navy. The outerwear was something to lust over, like the curly fur trench or the generous winter coat with ample fur paneling. The bottoms were also rather impressive, like trousers with a precise crease or skirts with sheer pleated linings. On a closing note, the nearly floor-length scarves were quite an impressive accessory.

Moschino
Suiting went whimsical, to put it mildly, on the Moschino runway today. First up, creative director Jeremy Scott sent out a spate of nine McDonald’s-inspired looks, festooning tart little skirtsuits, demure, boxy toppers, fuzzy robes, and more with those iconic golden arches and lipstick red. Shiny cowprint made a cameo, too, in case those Mickey D references weren’t explicit enough. A cheeky, campy, and kind of awesomely over-the-top read on classic Americana iconography. Blingy Moschino logo mania followed, with massive gold belt buckles and chains (drooping from the weight of massive peace sign and padlock charms) strewn across bleached-out denim, quilted patent leather, and tighty white-y separates. Lowly food packaging was reimagined by Scott as a series of fancy frocks. Turns out, that classic brown Hershey wrapper looks pretty swell in sweeping, sculptural strapless gown form.  As for the finale? A voluminous white strapless gown splashed with nutritional facts, paired with a bouquet. We certainly want to meet the bride who’ll be walking down the aisle in that zany confection. Et vous?

Why Has Lorde Fallen For New York City?