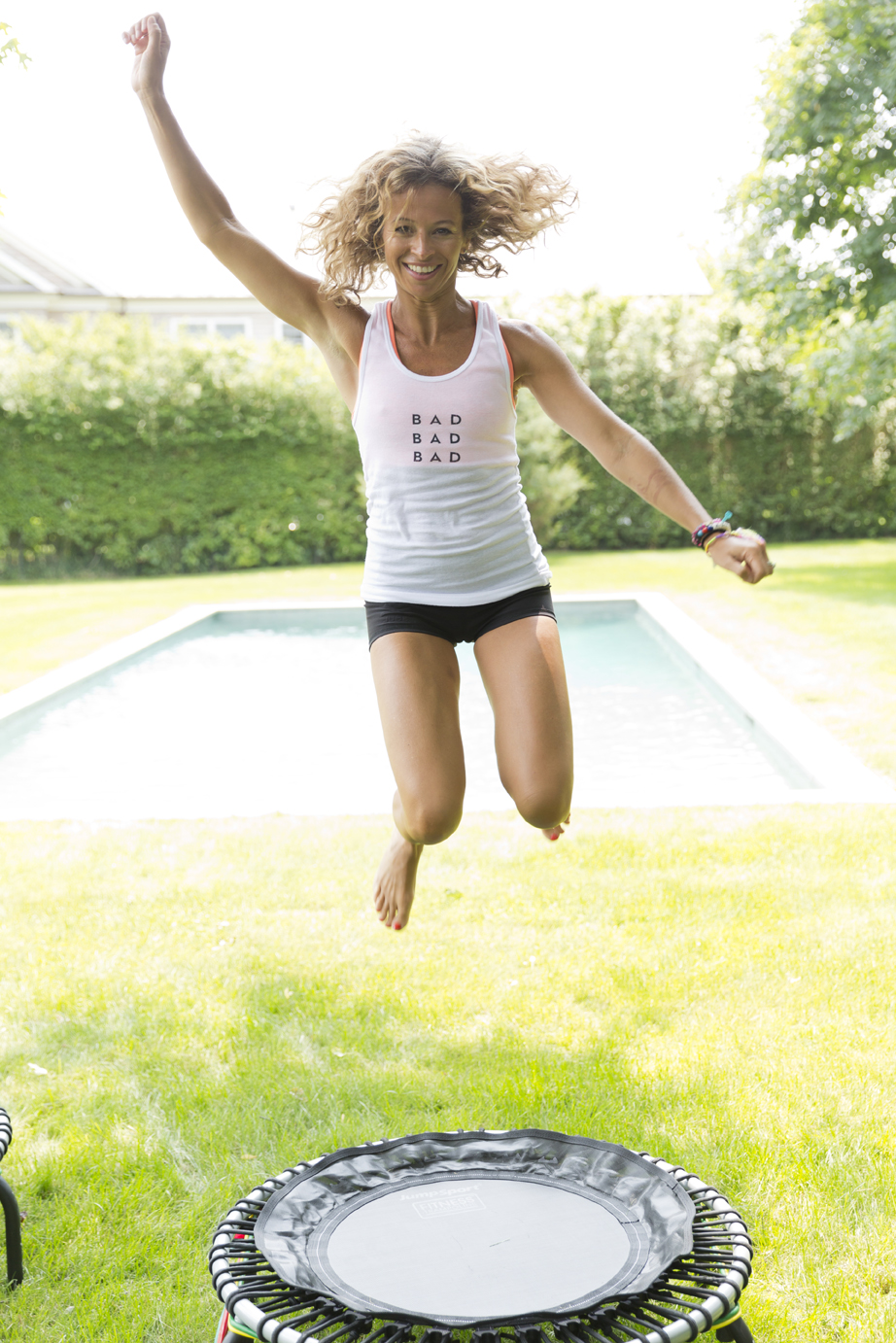 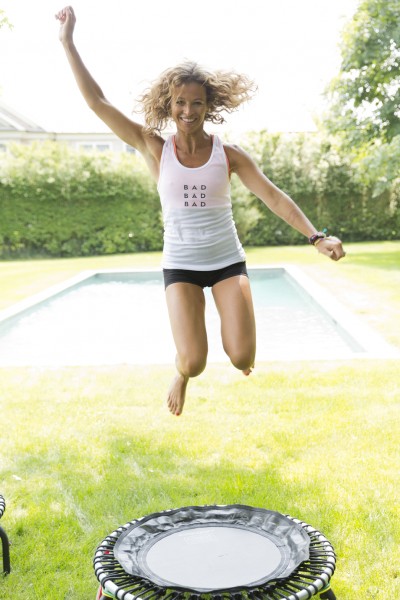 Milly designer Michelle Smith is no stranger to a tough workout, so we brought the latest fitness craze, trampoLEAN, to her house in Water Mill. Naturally, she jumped right in. Here’s what she had to say in the Daily Summer.

Are you having fun?
Yes! I love this, because it was really fun and challenging, and I feel like a little kid again. There’s a certain joy to this exercise, with the jumping and the carefree abandon.

You and Ralph Rucci are the only sweat-drenched designers we’ve interviewed. Ralph is a pretty great boxer…
Ha! I love to exercise, so I don’t mind.

Did you expect this workout to be so hard?
No, because it looks like you’re just having fun, but you’re actually pressing down into the trampoline, and it’s more about the down movement than the up movement. It was a big challenge to control myself, stay on the trampoline, and land in the right place.

Do you exercise daily?
No, but I go to SoulCycle three times a week, and I like Pilates, too. I used to be a runner, but it started to bother my knees and my back, so spinning and trampoline work for me.

Love your shirt—is it part of your collaboration with [SoulCycle instructor] Stacey Griffith?
Yes! A lot of the T-shirts are “Stacey-isms”—the motivational sayings that she uses in class. For the tank tops, we collaborated on some funny and irreverent phrases.

Such as…
“Bad, bad, bad.” Another says “Psycho”—I wore that on vacation. I actually forget that I’m wearing them. I dropped off my child at camp wearing one that says “Bend over once a day,” because in Stacey’s class, she asks everyone to bend over the handlebars to work the butt. These shirts are always conversation starters!

How did you and Stacey initially meet?
I was trying to lose the last 10 pounds of baby weight after my son was born, and it was a struggle. A friend told me about her class, and I was immediately hooked. We got to know each other through mutual friends. We share the same sense of humor and a love of pop culture.

What else is new?
This is the third season I’ve had my own store in East Hampton, and it’s fantastic. I feel like people really know about us now. Business is great.

Do you encounter many Milly fanatics on Main Street?
I do! I don’t know if they would want to be mentioned, but it feels great to have die-hard Milly fans. What I do is a labor of love, and to see people enjoy it is the greatest thing.

Think you’ll return to the trampoline again?
Definitely. I could see myself becoming addicted! 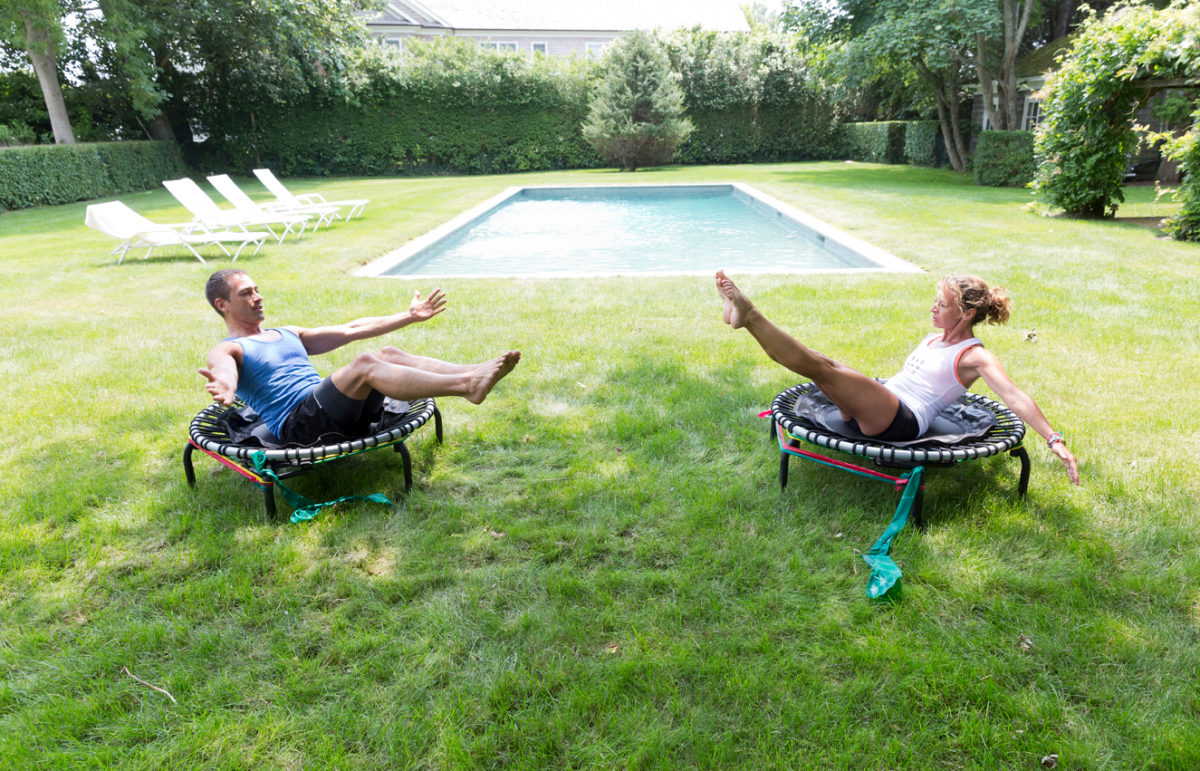 What are the benefits of the trampoline?
It gets your heart rate going, increases oxygen, burns calories, helps you lose weight, and gives you a nice, lean body. Every time you bounce on the trampoline, you activate your ab muscles. It also has similar benefits as swimming, so you’re burning off a large amount of calories and working all your muscles at the same time. It’s one of the best detoxifying exercises because of the vertical acceleration and deceleration of bouncing.

How can people do this with you?
I have a studio in New York City where I have classes going on seven days a week. Then I have a pop-up location in East Hampton at the Neighborhood House. I also teach private classes at people’s homes.

Is this the next big craze?
Absolutely. People want to have fun again with their fitness routine. The trampoline used to be quite popular in the ’80s, and now it’s having a resurgence. I use a premium fitness trampoline that has bungee cords.

How would you rate Michelle Smith as a student?
Once she got on the trampoline, she just fell in love with it. She was jumping and bouncing and doing all these athletic movements with a big smile.

You have a lot of fashion clients.
I train Valentino when he’s in town. Right now he’s yachting around the Mediterranean somewhere, but when he gets back to New York, I’ll see him.

Have you gotten him on the trampoline?
Not yet.

PLUS! Below’s a look at MILLY’s fall ’15 ad campaign
For MILLY’s fall 2015 ad campaign, the brand decided to change things up by shooting the ad set outdoors–for the very first time! Typically shot against a white or clean wall, MILLY’s creative director Michelle Smith wanted to tie in her NYC roots by making the streets of Tribeca this year’s campaign setting. The final product? Perfection. The photo spread was shot by Cedric Buchet and styled by Aleksandra Woroniecka; Xlex Wiederin was the creative director.

Check Out the First Issue of The...

Are You a Summer Icon? Take Our...

Meet the Man Behind the Chicest Ceramics...

The Daily Summer and Out East Host...