Met Ball 2014: Who Channeled The Drama Of Charles James? 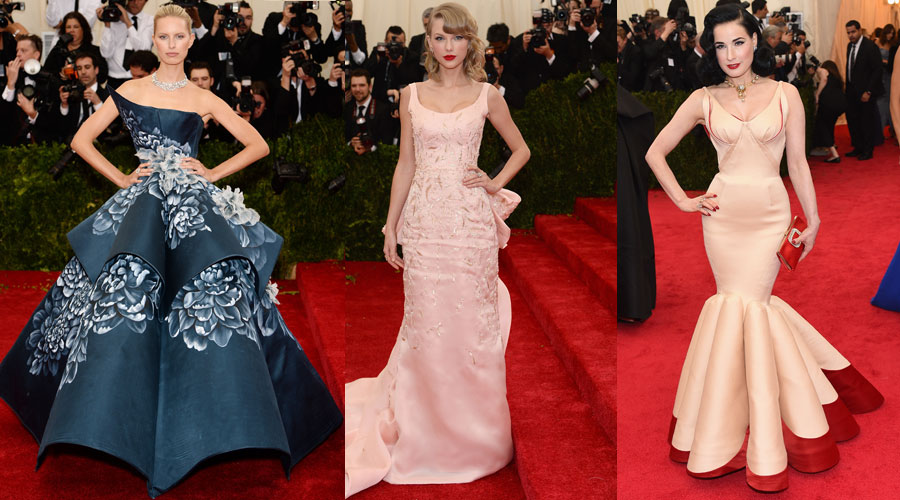 (NEW YORK) The Met Ball is always brimming with anticipation and over-the-top fashion moments, but this year the glamour was in full swing with The Met’s “Charles James: Beyond Fashion” theme. In stark contrast to last year’s Punk motif, Charles James was a 20th century couturier best known for his dramatic, voluminous, and sculptural ball gowns that would be more at home at Le Crillon’s Bal des débutantes in Paris than in the shadowy depths of CBGB. As with every trot down the tapis rouge, there were some hits and there were some misses, and a handful truly captured the essence of Charles James’ legacy.

First up? Karolina Kurkova simply owned the red carpet in a midnight blue sculpted strapless organza gown with hand-painted floral illustrations by Marchesa. How she managed to be shuttled in such a dress to The Met is another story. Oscar de la Renta had a number of hits, which came as no surprise since the designer’s aesthetic and inclination towards voluminous eveningwear makes him somewhat of a modern-day version of Charles James. Love it or loathe it, Sarah Jessica Parker’s black and white gown, which came with a long train that had a check pattern and ODLR’s signature in red at the hem (paired with even more dramatic hair and opera-length gloves) spelled d-r-a-m-a. Karlie Kloss stunned in a strapless gold lamé cloqué gown with lacquered feathered embroidery and opera-length black leather gloves by the designer. If there’s anyone that can pull off a major gown, it’s Kloss, thanks to her famous 6’1” frame. Plus, Allison Williams and Taylor Swift continued on with their red carpet winning streaks: Williams in a simple but stunning red satin gown and Swift in a soft pale pink gown with a bustle and long train in the back. Another designer known for his statement making red-carpet glam gowns is Zac Posen and he didn’t disappoint. Dita von Teese came on the cape-clad designer’s arm in an old Hollywood style pale peach fishtail dress with a ruby red hemline. Models Liu Wen,Arizona Muse, and Karen Elson all looked like goddesses swathed in Posen’s designs, which truly conveyed that Jamesian glam. And a surprise red-carpet winner was Sarah Silverman in a full-skirted scarlet satin strapless dress by Zac Posen, which looked truly elegant on the comedienne. Other winners that captured le drame? Toni Garrn, Jourdan Dunn, and Kendall Jenner in custom Topshop and Suki Waterhouse in a beautiful nude gown with a tiered skirt by Burberry, plus Zoe Saldana and Jessica Paré both in black and white Michael Kors numbers.

There were plenty of best-dressed moments that didn’t quite fit to the night’s theme, but still owned the red carpet in their own right. Stella McCartney’s girls were parfait. To wit: Reese Witherspoon in a classic, glam strapless pink gown that flattered her figure, a slinky blush pink on Kate Bosworth’s lithe frame, and Cara Delevingne in a black strappy crop top and white skinny pants that played to her quirky, youthful nature, stood out in the sea of gowns. Rihanna also looked ravishing in a white Stella McCartney skirt and match long-sleeved midriff baring crop top, but it would be nice to see her tone down the sex appeal just once, non?Beyoncé killed it once again in custom Givenchy Haute Couture by Riccardo Tisci  and Naomi Campbell was also wearing the label’s Haute Couture line by Tisci in a custom white cut-out gown with feathered sleeves that we swear only she could pull off. Singer Erykah Badu, who recently starred in Givenchy’s ad campaign, looked badass in a white sequined jacket, giant crystal earrings, and an off-white top hat that gave Pharrell’s famous Vivienne Westwood hat a run for its money, yet another Riccardo Tisci-designed custom Givenchy Haute Couture number. And dare we say that Kim Kardashian actually looked good last night? Her Givenchy floral number last year didn’t quite flatter her pregnant frame, but her cinch waist, strapless satin Lanvin dress in midnight blue with a high slit accentuated her (post baby) curves in all the right places. Anne Hathaway looked lovely in a custom Calvin Klein Collection geranium silk crepe crop top and matching skirt, Hayden Panettierrearguably looked her best yet in a pale blue and pink Dennis Basso gown, Blake Lively donned a custom Gucci mauve pink sequined cape gown, and Julie Macklowe went for a cheery, sunny look by Honor for the eve. Kristen Wiig, on the arm of Alexander Wang, was another comedienne that rocked the red carpet in a black Balenciaga top with a train, black cigarette pants, and black point pumps. And as always, Charlize Theron and Marion Cotillard were looking simply divine in Christian Dior Couture.

Finally, as with tout les tapis rouges there were some misses. Lupita Nyong’o had her first red carpet miss in an emerald green flapper-inspired fishnet dress by Prada. We have to hand it to her for taking some risk, but the look was pretty out of place for the evening’s theme. Michelle Williams looked adorable in Louis Vuitton, but it was also a bit off the mark. While there were certainly others that weren’t in keeping with Charles James (i.e. Delevingne, Wiig, etc.) the others at least managed to capture the lens. And while Katie Holmes‘ Marchesa dress certainly had the volume and ornateness of a James creation, she looked a bit too close to Disney’s Belle from Beauty and the Beast for comfort. That being said, Marchesa had one of the biggest hits of the evening with Kurkova. Of course there were others that didn’t quite do justice to their models (Sandra Lee channeled another Disney dame, Cinderella), but we’ll let you decide the rest. Peruse through the Gallery for all of the Met Gala’s grandiose moments of fashion’s most fabulous night…

May The 4th Be With You, Rodarte Style