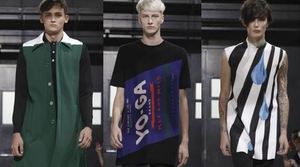 (PARIS) Raf Simons
By taking his collection 30 minutes outside of Paris, Raf Simons‘ latest looks for men was a bit lighter and airier than typical, sometimes very serious City of Lights showings.  An apropos shelter for this youthful production? Larry Gagosian‘s Le Bourget gallery, where works of art by Alexander Calder and Jean Prouvé provided the background for Simons’ Spring/Summer 2014 Collection. Taking cues from his past as a rowdy club kid, the designer infused basic black pieces with bright colors and pop art references that felt right at home against the thumping background music. Acid raindrops washed across a bold striped tank, for example, while a shrunken blazer topped off an elongated tee.

A few of the looks even borrowed from some recent Dior designs, the most obvious of which was a pink and black striped print that took shelter under a feminine white blazer with statement-making buttons. Simons’ collection catered not only to his male clientele, but also offered pieces to entrance the femmes who favor his designs. As Simons told Dazed Digital in an exclusive backstage interview, “I don’t feel at this moment in time to want to specifically design something for women because I find it fascinating to see the fact that women want to buy things that they see on men.” The black jumper paired with a floral blouse would pair perfectly with a pair of wedges for the gals, while sequined tees and slim-cut shorts would transition between his and her closets seamlessly. As if we needed any additional reasons to ransack the blokes’ closets.